Jeffrey had a good birthday. He got lots of camping stuff and Scott Muir stayed overnight at the ranch. Scott gave him some trucks. 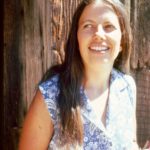 The rest of that week was really busy. That Tuesday we dropped Scott off at the elementary school (where his mother worked), picked up Linda Ohde to sit with children for a couple of hours. I took the car to the tire shop and left it, walked to Valley Pharmacy, bought a paper and sat in the Bakery with a glass of lemonade and a doughnut and read for 20 minutes. Walked back to the tire shop where we’d had recaps put on the back. Went to Rikerts’ to pick up stuff for the bridge; went to the hardware store for more stuff. Got home and Doris came to pick Linda up. At 6:00 we went to the Alps for inner. Aunt Nell, Lloyd and Marie came in while we were there, eating outside. They’d just gotten back from Redding after going to Brookings the day before to get Aunt Nell and driving back to Fortuna. Got to the ranch around 8:00. I was really tired. 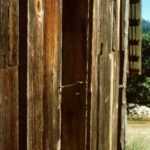 Wednesday afternoon around 5:00 Florence and Leonard came out in their camper. They parked in the orchard and we all ate dinner up there, swatting mosquitoes and no-see-ums. Combined dinners. Thursday morning they and Bob and Rebecca got up at 5:00 a.m. and worked on the bridge abutments all day—to 6:00 p.m., 7:00 for Bob. I mowed the lawn and most of the orchard, picked blackberries and made a pie, took lunch down at noon, etc. Thursday night we all ate in the house. 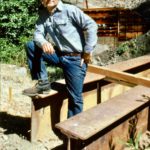 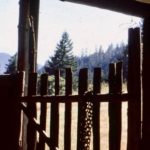 School started and the children were adjusting to the new life schedule accompanied by fatigue and crossness. Clarke played well by himself in the mornings but was tired in the afternoon. Rebecca was missing the “down” time that she needed what with my running errands so many days after they came home plus the length of her day on piano lesson days. It showed in her fatigue. Jeff was disappointed that three of his favorite friends weren’t in his class that year. “He has such a funny way of saying things sometimes.”

I began cleaning the house and rearranging some things. I had the first nursery school parent meeting with 17 people coming. There were 22 children signed up so we scheduled two classes. (ended up with 25 children)

“I had a letter in the newspaper concerning the recent anti-nudity law passed by the Board of Supervisors.” I vaguely remember this! And I was surprised that I got support for it when I’d expected the opposite.

Bob and I spent a weekend out at the ranch, leaving the children with grandparents. It was mostly a relaxing time but of course we also did some work. Took leftover lumber from the abutment work up to the barn and stacked it; while he was stacking it in the barn I cleaned the pool. Then he picked pears while I picked corn. Froze blackberries the day before. Picked a sack of apples. We called Florence from Big Bar where we ate dinner, almost like a date. My writing during these months had notes of total optimism interspersed with kind of mournful poems.

Bob was up early the next morning so Lonnie could fly him to Bakersfield. He would be gone all week. That morning I took the VW to Miller’s to get it lubed and asked to be dropped off at our driveway so Clarke and I could walk up to the house. I noticed a little stream of water just below the road and discovered it was sewage from the pump house. The pump wasn’t working although the light was. So I called Sam Smith and he came over around 1:00. After numerous trips to get tools, pump, parts, etc. they got it fixed. The ball float had sheared off and they had to get it out of the tank, re-thread the shaft and put on a new ball. The VW was returned while they were there.

I was delighted to find a check from Ranger Rick’s Nature Magazine when I went to the post office. (I think this was for the article Linda Lives on a Lookout) When I went by Florence’s to get some corn and tomatoes I learned that the horses had gotten into their garden the night before and ruined most of the corn stalks. Took the children to the pool for an hour.

After dinner, when I was starting to serve ice cream, Clarke dropped his plate, which shattered all over the floor. I thought I had knocked a bowl off and cussed. Poor Clarke was so stricken he rushed out of the room. He thought not only did he break his very own plate but that I was really angry with him. We got that straightened out and Jeff very kindly told him he could use his plate (identical) from then on, which he did.

Brigitte and I met at the nursery school to get things ready. She brought Andy, who played with Clarke, while we worked. She would be teaching on Mondays and I’d do Tuesday, Thursday and Friday mornings.

We bought a used girl’s bike from Audrey Bush for $15 for Rebecca. It needed a new rear tire but that was included; we just needed to put it on. She needed a larger bike and this then allowed Jeffrey to use her smaller bike.

On another day I left Clarke with Linda Lindsey and worked at the nursery school for several hours. That afternoon Rebecca and Jeffrey helped me with more work. We picked glass out of the sand pile, placed tires, etc. for about an hour. Then I turned them loose downtown to spend money from allowances and birthdays. I went to pick up Clarke and met them at the bakery. 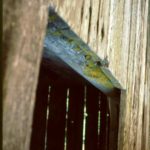 October 4th I was up Garden Gulch. ”up at the place I found last spring, below the creek where I found the gold pan, below where it enters Garden Gulch.” I was surprised to find there was water in Garden Gulch at this time of year with still no rain. I needed to be alone so badly. All I’ve been doing since school started is housework and nursery school.

“Jeffrey lost a second front tooth last week. It was very loose and he bit Rebecca during a fight! I’m afraid I wasn’t very sympathetic with either one.”

I really liked this spot along Garden Gulch and wrote a detailed description, including a sketch. I mentioned that I’d seen a lot of bear scat along the last half mile.

October 9th: Bob was in Bakersfield again. “Feel like I’m about 12 different people these days.

““Rebecca told me tonight that Jessica (her cousin) had brought her up to date on all the latest 4-letter words. Part of growing up I guess.”

“Got a letter from Walter Meyers (he was the author and photographer for an article in National Geographic about Crater Lake when I was working there.). When I think of all the hazards worldwide and personal—it helps knowing I’ve known such interesting people and really have had quite a varied and interesting life. I really like my present age—more confident, able to sort out things worth doing and people worth knowing, liking my husband for much better reasons than I used to.” 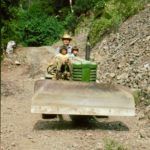 We went out to the ranch that Saturday afternoon and stayed overnight. Sunday I moved the lawn, most of it, and left by 1:00 so Jeff could go to Robbie Fox’s birthday party at 2:00. Did some chores. Bob called at 6:00 to say he was on his way in. At 6:45 he called to say he was back up at the house and the truck had broken down, had a brake stick. So I called Linda Ohde and Eric brought her over to be with the children. I drove out and got Bob and we were home by 9:30.-2802″ /> 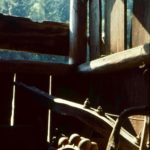