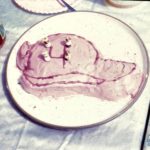 Roy Blair and Bob drove to S.F. to attend a symposium, leaving on a Monday night and getting back late Tuesday night.

Wednesday I drove into town and left the two boys with Linda while Rebecca and I went shopping for Jeff’s birthday gifts. It was to be a fireman’s party with fire hat invitations and a fire hat cake. I made the cake that night and decorated it the next morning before the party. Children came at 10:30 and went home at 12:30. Jeff had invited Dennis Hooper, John Van Duyne, Robbie Fox, Ronald Lindsey, and Forrest Hartman. Rebecca had invited Jenny Hooper to play with her and when Marilyn brought John over we asked Nancy to stay too. I had frozen nine snowballs during the last winter and we had just enough. I had Muff Wilkins there to help and Clarke was at Linda Lindsey’s. 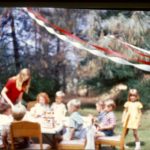 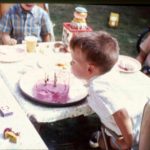 Rebecca, Jeffrey and I watched a monarch butterfly emerge from its chrysalis. We raised four of them that summer. And the two polliwogs we’d been keeping in Weaverville finally got four legs so we turned them loose.

Rebecca enjoyed three days of ecology classes at Bill Harger’s—they were low key and involved a lot of humanitarian stuff too, which was probably good. I took Jeffrey the second time and spent the whole day but he slept for two hours in their bed, exhausted. The last day I left him at Linda’s, which was much better.

September 2nd was the next time I wrote and Bob and I were at Bear Lake. Florence and Leonard had been on a two- week horse pack-trip into the Jim Bridger Wilderness Area in Wyoming but were back and she was taking care of the children. (I don’t know how she did all this!) On the night of the 31st I’d taken the three children and numerous diapers, clothes, a playpen, etc. to Florence and Leonard’s in preparation for our leaving the next day. Florence was at the Art Center but Leonard was there.

It was cloudy and showering when we started up the trail. The trail was very brushy and we began to get wet. Every leaf seemed to be waiting to dump its load of water on us. My new pack was very comfortable—I carried 30 pounds and Bob 40. “When we were getting close to the lake we passed through a little pitcher plant bog, which included a bear wallow. Here we met a couple on their way out. As we reached the lake we met another couple who said they’d caught some fish the night before. We went around the east side of the lake, scrambling over rocks and through brush. I had troubles with my pack, which flopped around a bit. Kept pushing down on my head when I crawled, my usual graceful method of rock climbing. “

We finally found a nice campsite—good view across the lake and out to mountains beyond. “The lake itself is one of the prettiest we’ve been to—granite cliffs, studded with brush and fir, very deep. We were cold, wet, and miserable. The wind was blowing hard; we were soaked to the waist. Bob heated up water on his stove and we had hot tea and candy before setting up camp. We were using Florence and Leonard’s tent. “

I built a fire in the rocks and heated up water on the iron top that was there. We cooked dinner on Bob’s stove. Went to bed early and wakened often during the night. Apparently there wasn’t a rainfly because I wrote that Bob had put plastic over the tent top and it rustled in the wind all night.

“In the morning Bob was still tired and cold so he slept in. After much struggle with wet, smoky wood I got breakfast. After I’d cleaned up the dishes I left Bob a note and went up the hill behind here. There are a series of small benches rising up to the base of the final cliff. I had a marvelous time exploring—several tiny creeks ran through there and there were numerous little ponds in the granite and mossy miniature cliffs with tiny waterfalls trickling over them. The top pond was the largest and I disturbed some frogs there. I got back at lunchtime. We talked about how good it would be to get the children in here. Bob saying the thing to do would be to get them into one lake and just stay.” (which we did a number of years later although not this lake.)

We had moved into town that Sunday. Washing machine, ducks, cat, children. I’d also prepared and canned five quarts of applesauce that day and picked most of the peaches. Rebecca had started school Monday. I took her the first day and she rode the bus home. Tuesday she caught the bus as usual. She didn’t want to go to Warm Mountain School much so we decided to wait awhile but Jeffrey was very anxious to go. She was much more secure and happy with routine.

“It’s so nice sitting here on the rocks in the sun—and so cold when a cloud goes over! A chipmunk lives nearby and explores the camp frequently. It nibbled at the bar of soap last night.”

Later—“It’s after dinner now. The sun is still tipping the backsides of the spikey ridges around the lake. And it still covers the top of the bare-topped mountain off in the distance. An occasional puffy white cloud hazes its way across above us. We’re sitting by the fire having consumed an enormous meal of bullion, beef stroganoff and chocolate pudding and tea.”

That night the wind blew very hard until about midnight, apparently the last vestiges of the storm. About 11:30 I had to get up so Bob suggested that I take the plastic covering off the tent. It was flapping and making a terrible racket. There was a bright moon and not a cloud in the sky. In the morning when I got up there was frost on the woodpile and on shrubs around camp. By 8:30 our camp was in sunlight and I had taken a quick dip to wake up. Our campsite was at the foot of a big glacial- polished slide. 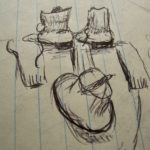 After breakfast I fixed lunch and we made a rather late start for the area where I hiked yesterday. We planned to go to Little Bear Lake. When we topped the ridge, abut an hour out of camp, we could see Mt. Shasta to the east and right below us, Little Bear Lake. It was a beautiful little lake, much deeper and larger than we’d expected. Very dark green in the deepest parts. It took about ½ hour scramble to get down to it. There were several good campsites in the trees near the outlet and one on a point above the outlet. The lower end of the lake was pretty well crisscrossed with fallen logs. It sat in a granite basin similar to that of Big Bear Lake but there was more vegetation and there was even a tiny patch of snow on the north-facing side. The campsites were cleaner than most and we were very impressed with the place. On way out we followed down the outlet where there was another lake/pond size but deep with shallow areas where a child could play. We talked all the way back to camp about trying to get Rebecca and Jeffrey up there next summer. We contoured around the granite glacial-polished slopes on our way out, coming into Big Bear Lake at the lower end. Said hello to our neighbors and then went on around back to camp. The sun was gone from our camp by 4:15 and from our swimming area by 4:00 so we jumped in as soon as we got there. Bob swam clear around the point to camp but I just went a short distance—am not that strong a swimmer. Much warmer that day. Didn’t need jackets until evening.

We saw and heard Clarke’s Nutcrackers over at Little Bear Lake. That chipmunk was investigating us again. It must have had a good time exploring the camp while we were gone.

Our tent faced the lake and the campfire was between the tent and the lake. Small mountain hemlocks were scattered among the rocks, fox-tail pine and an occasional fir. Most of our firewood was small, dead branches which had fallen from the hemlocks, bark from big downed pieces of fir or hemlock in the talus piles, etc. Some of it was pink from a borate drop that landed in the rocks. Around an inlet from us was an area about 50-feet square where a fire had burned. Four, old paper sleeping bags lay nearby, left by smokejumpers.

It took us 4 hours to hike out including a lunch break. After we got back to Weaverville Saturday I cleaned up, went to the grocery store, and then picked up the children. My descriptions were so detailed and there was a sketch or two so I think we must not have had a camera along. 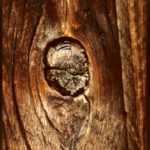 Sunday the roofers came—they’d brought the asphalt shingles the night before. They left mid-afternoon because of the heat and came back Monday to finish the job. We went out to the ranch with Janet and Mike. The sunflowers were in bloom. Picked a few tomatoes, peas, green beans and blackberries. Janet and Mike picked a few boxes of apples and a bucket full for us as well as a sack full I wanted to give to the Ohdes. 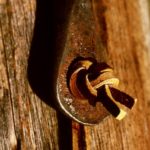 That morning Lewiston school had called to see whether I could substitute for a week for Mr. Giovenetti, who taught 4th and 5th grades, as he had an emergency appendectomy. Linda Lindsey would take care of Jeff and Clarke, and Rebecca would go to Hooper’s after school.

We had the two ducks out on the back lawn in separate cages to keep them from pecking each other and were considering taking them to Janet and Mike’s.

Bob was running around like crazy that afternoon picking up the papers the shingles had been packed in, dumping stacked up branches, hauling garbage and wanting to throw away all the children’s outside toys! “If a new roof does that imagine what a newly painted house will do!”

“I wish he’d slow down some. It worries me when he’s hitting such a hard pace as he has most of this last year. Thank goodness he had the camping trip, wearing though it was. It’s also hard on family relationships when he’s gone so much and when home either sleeping all day or studying.”