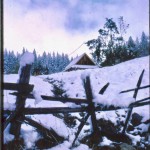 The day after Christmas, Peter, Richard, Charlotte, Bob and I drove out to Junction City. A cable had been strung across Canyon Creek with a small cart attached to it and we rode that across the raging water to the other side. There, a friend (Sandy Sanders) who lived a little further downriver, met us and took us down to Prairie Creek. We hiked up our road and discovered that the culvert across the small side stream, at the end of the long hill, had collapsed. Several places had washed out. When we got to the fill across Little French Creek, we found it completely gone. Apparently the culvert had plugged up and the high water had washed around the east end. There was only one log left from the original, old bridge and we were able to cross on that. My two brothers and my husband walked across, but Charlotte and I scooted across on our rears. It had been raining hard the entire time, and the log was wet and covered with gravel. I’ve never been good at walking across logs that extend over running water. And besides, I was four months pregnant and not inclined to take chances.

We hiked up to the house and had hot soup, sandwiches and coffee for lunch. Then we packed out our clothes and the cat, Aloysius. When we got to Prairie Creek, Sandy picked us up and took us back to the cable car at Junction City. We must have given him an estimated time to meet us because there were no phones.

By January we had found an apartment and started moving into it. January 3rd, there were three feet of snow on the ground in Weaverville and it was still snowing. But by the 16th we were able to drive out to Prairie Creek. A Bailey bridge had been put across Canyon Creek a short distance up the creek and we could drive up and over a hill on the Powerhouse Road. That was the way I ended up commuting once school started again. Eventually a new bridge was constructed across the Canyon Creek. I could be mistaken on some of this having to do with the bridges because my notes don’t mention any of it. I do know I had to use the Powerhouse Road for a number of weeks. When we got to Prairie Creek, Bob cut five trees out of the road and we stacked the pieces.

A week later we left the car about one-half mile up our road and hiked through the rain up to the house. We crossed logs downstream from the devastated fill. I took the decorations off the tree. The wind started blowing hard in the middle of the night and when it stopped it began to snow. By morning there were four inches accumulated. Bob did some surveying while I cleaned out the refrigerator and swept. We went home by way of the usual log and ate dinner with his parents.

In late February we did some more cutting and pruning along the area where the phone line was going to go, but down closer to the highway. And a week later he and a co-worker hiked in and packed out some more things. Bob also pruned the peach trees and the small orchard trees. By now it was possible to cross the creek on some driftwood below the washout. The daffodils were about to bloom. Bob started up the tractor but something was wrong with the rear axle.

In March we took the small, store truck (Bob’s parents owned a hardware store in town) and some old boards and drove out to the sunken culvert at the foot of the long hill. He built a sturdy little bridge across it , which the truck could just go over and which would be perfect for the VW. He cut the oak out that was across the road. Then we drove up to the switchback and cut that tree out. We were then able to drive to the gate at the top of the hill above the long descent to the creek. I noted that the redbud along the river was about to bloom.

A week later we drove as far as the creek and walked up to the house. The weather was beautiful, a gorgeous spring day. Bob surveyed and marked a road route for a new stretch below the house. I planted flower seeds and changed sprinklers on the lawn. There were many goldfinches, robins and Steller’s jays that day. The trees all had swelling buds and the maple was about to bloom.

The next day he cut branches out of the black walnut. We measured the fall from the lower spring to where we were going to put a generator below the house as well as the length of pipe needed to convey the water. The daffodils were all in bloom, but the lilies had been chewed off by the deer. Oso berries (Indian plum) were in full blossom, filling the air with their fragra 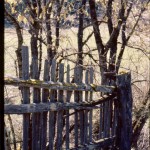 In late April Bob worked on the phone line, climbing and putting up insulators. I laid one out by each tree. The apple trees and the lilac were in bloom and I took a picture of the redbud. Down at Prairie Creek a dogwood was in full bloom. The next day, while he put up more insulators, I worked on science worksheets for school.

I had been fortunate to have a cooperative group of children during this time. With just one teacher you are on duty the entire day—classroom, recess, noon hour, etc. When it got to where I couldn’t run around on the playground with them it was fine for me to just supervise standing or from a chair. Sometimes the phone went out. This happened one day when one youngster decided to run away and there was really nothing I could do about it. His sister suggested leaving his lunch near the driveway, which I did. Sure enough he came back when he got hungry and was happy to join us again. May 5th there was a surprise baby shower for me at school!
,