On a Sunday Linda Ohde did childcare while Bob and I went out to the ranch, picking up Darrel S., who bought property in Big French Creek up toward the Upper Ranch. He wanted to access through our place and we thought talking to him on the way in to our place would be good. He’s about 30, long, blond hair, smokes, used to live in Idaho. We got things worked out with him fairly well I think. At least we all understand each other a lot better. It was very cold out there but o.k. while we were moving. He and Bob climbed up on the big rock by the creek to look at the Douglas fir that leans out toward the bridge. He was a faller so could give some advice. We got home around 5:00 pm. 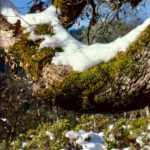 Saw a beautiful scene out there. We were sitting on the porch when a flock of birds, band-tailed pigeons perhaps, came flying in low over the field. At first I thought it was the wind, their wings made such a loud noise. Then they divided, two groups wheeling out in opposite directions, rejoining, dividing, swooping up and diving and turning so that the light and shadow alternated between the tops and under parts of their bodies like one of the Escher drawings. When we left, they were perched in the top of a snag and another tree and had been there for about 15 minutes. Saw another flock on the way out and some at Pigeon Point, along the river.

Tuesday morning there were just a few clouds in the sky when we got up. By 9:30 it was snowing and by 12:30 I slid around a lot on the road going out of Lowden Park. By 2:30 Oregon Street was all melted off. Made a snowman with Clarke. One day that week I wore my shirt that said, “The Hand that Rocks the Cradle Should Rock the Boat”.

Bob was out of town again. I wrote “I’m starting to get extra cross with the children again. I think a lot of it has to do with Bob being gone so much. I get so tired of responding all the time. It would be great to be a calm, even-tempered, lovable mother. I guess such ones exist.”

Thursday morning we had only five children out of 24 at Nursery School. The rest were ill. We took them to the cabinet shop (Weaverville Woodcraft) and then to Brown’s for a treat. The heat was off in the Recreation Building because they’d run out of fuel. So we were lucky to have warm places to go.

Friday it snowed all day. I took Bob to work and the children to school with just snow tires. Around 10:30 I started down the road but was sliding a lot so stopped at the turn (of our driveway) to put on chains. Got one on easily—too loose, actually, but couldn’t get the other. I was soaked from lying in the snow and muddy from dirt off the car. Hooked two tightening hooks together to connect the chain and drove down to the road. Clarke and I then came back up the hill and ate lunch. I put my jacket and pants in the dryer. After lunch I turned on the TV, channel 9, for Clarke to watch and went back down. Got the chain off and started all over. Finally got it fastened. Walked back to the house and got Clarke. Went down to get copies of my letter from Bob, bought groceries, and went to the post office. Picked up Rebecca and Jeff from the hardware store where they’d been since about 12:30. The school had called me, then Linda Lindsey, then Florence because the children were getting out early. Florence reached me when I came up for lunch. Got home around 3:00. At 5:00 I walked down to the car and went to get Bob from work. 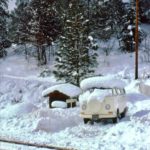 When there was snow we’d park down at the bottom of the driveway and walk down to the car from the house. The next day, after breakfast, I walked down and shoveled quit a bit of snow from the front of the car, where plows had pushed it. Drove downtown and bought groceries and a birthday present for a friend of Rebecca’s. Went in the Village Greenery, which had its opening day that day. Went home and made two trips up the hill, the second time with my daypack. While I was gone Jeff said he’d gone down and done some shoveling for me.

Kinnik-Kinnick loved the snow and bounded through it and rolled in it. Unfortunately that day she caught a jackrabbit and brought it to the back porch. The kids were o.k. about it but were worried that it was still alive because its eyes were open. 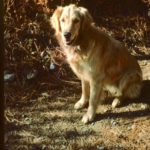 Bob was sick with a sore throat and cold but everyone else was healthy. He was getting good feedback on his abilities from the main office. We had about 14 inches of snow on the ground.

Rebecca got sick. Rosemary Echols subbed for me at nursery school. At the night class Jack McMills showed a film on resuscitation and talked about CPR. It was a good class but only about half the people were there because they were sick or their families were.

I was reading a book by Edwin Way Teale called the “Lost Wood”. He traveled all over and observed and wrote.

One night I went to two different board meetings: one at the Recreation Building to ask the Park Board about dividing the room. Then went out to Rosemary Echols’ for a nursery school board meeting.

On Valentine’s Day I gave each of the three children a heart-shaped box of candy. Had never done that before. They seemed pleased. 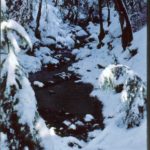 Bob suggested Sunday afternoon that he would take one or two of the children to the office with him. I suggested him taking all three and they went down to play with the computer while I went for a walk. It was raining a little when I started, with a few snowflakes, and then steadily. I got soaked but “it felt good to be out by myself again. I practically ran up the trail. There was till some snow here and there; every little gulch was pouring water and water was coming into or gushing out of every gopher hole. I started down Pinky Gulch to the place I visited a lot this fall, which overlooks Garden Gulch. There was about six inches of snow, which squished slushily on every step. Ahead of me a large bird flew up. At first I thought it was a grouse, although it was bigger. The light was dim and through the rain I couldn’t see many distinguishing features. It was grey except for dark bands above the eyes. The crown and cheeks were white. The tail was rounded and large. It flew off in a curve so that it went up hill as I approached. I discovered a partially eaten rabbit carcass where it had been on the snow. The legs and hindquarters were all that was left and there were bloody marks on a small boulder nearby showing, perhaps, where it had first perched. I decided it must have been an immature hawk or possibly an immature eagle. Would have stayed a while to get another look at it but was getting cold. Had a thermos of coffee with me and drank some on the way home.”

Took the children and Linda Ohde to the Chinese New Year celebration at Moon and Dorothy Lee’s. Then Fred Meyer took Linda and the three kids to our house and took his children home while Jeannie Meyer and I went to a school board meeting. I wrote that it was one of the most interesting ones I’d been to where they were discussing priorities—teachers were expressing themselves strongly.

The next Monday afternoon Bob flew from Redding to San Francisco to take a class in Fortran (a computer language). He got back Wednesday afternoon.

Wednesday morning Rebecca woke me up at 6 a.m. saying her ear hurt and everything was blurry. She’d been sick and taking penicillin so this was a total surprise –had a temperature of 104. I panicked and called the hospital after giving her aspirin and putting her in a cool bathtub. They said to call our doctor, which I did, waking him up. Later felt quite foolish since I should probably have waited to see whether or not my efforts had lowered the fever. He said to go to his office around 9:30. By then her temperature had gone down but she was still really sick. By mid-afternoon it was back up to 105. The Ohde kids came to get Clarke. Jeff was down at Myer’s. I got Bob to come home to help with a very miserable child in cool water. After a few days she got better, of course.

A couple of days later I told my spouse that “the only place we’d been together, since my birthday two months before, had been two funerals”! 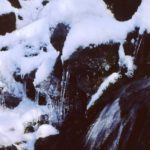 That Saturday, a foggy and cold morning, I was able to eat breakfast, get food ready for the children, run a load of laundry, fix a lunch and leave the house around 8:30. “Parked the car by Bagley’s and went up the trail. Frost had pushed the dirt up and I sank at least ¼ of an inch with every step, my feet crunching the pillars of ice. The manzanita bushes were covered with frost—crystals sticking up every which way, like sparse porcupine quills, and some lying flat against the leaves. Rose hips likewise had this sprinkling and all the spider webs were white.

At Pinky Gulch there were icicles hanging in the creek and some roots completely encased in ice. Took a picture of some ice at the first creek crossing. By the time I got up to Pinky Gulch the sun was shining. I went down to where I’d seen the big bird and the dead rabbit. Found many clumps of fur scattered on top of the rock, not much on the ground, no bones. There was also a hair-filled feces on top of the rock, fox maybe.

I went way up to the top of the ridge. I’ve been aiming for—but didn’t
get to–where it branches. About 200 feet from it I was stopped by a manzanita field. Must talk to Vernon Ryan again about getting up on that ridge to the left. I ate lunch sitting on a rock, which had short, dead manzanita branches on its sheltered side. It sat in the middle of a snow patch and manzanita. Trees are all oak and Digger pine (gray pine) on that ridge. Saw a couple of deer—many tracks. As I was about to leave, I saw a big red-tailed hawk. It came low over the ridge to land plumply in the top of a Digger pine about 50 feet away—magnificent bird, if you’re not a mouse! Went too far to the left on the way down and floundered around for a while finding my way back. At lunch I could see just the tip of Weaver Bally to my left but most of the ridges to the right still had snow- covered trees at that elevation.”

Saw shooting star leaves coming up—varied thrushes, robins, chickadees, towhees, Steller’s jays, and a gray squirrel. Oh, and also, while I was eating lunch, a flock of band-tailed pigeons came wheeling in, turned in formation and disappeared. I could hear their wings, like a soft wind. Greenleaf manzanitas are beginning to bloom.

“I really had a good workout—physically and psychologically. Very stimulating. “

We got a note from Florence and Leonard with their address for their stay in Mexico.