We went into town for swimming lessons. Went up to the house so the children could change into their suits. As we were turning into Lowden Park, the door on the passenger side flew open and Jeffrey, who had been sitting there, went flying backwards out of the car. Rebecca yelled his name as I slammed on the brakes and was out of the car to run to that side but in that brief amount of time he was already back in his seat, shaking and scraped. I gave him a quick check and then continued to the pool where I left Rebecca and asked Patty if she’d look after her until I got back. I drove over to the hospital where they cleaned off his elbow and took him upstairs for an X-ray. He enjoyed riding in the wheelchair and up the elevator but wasn’t at all happy about the cleaning process. Had to wait a while for the x-rays, which didn’t happen until Dr. Polka came. The arm was o.k. Apparently the bones in the elbow of a child that age aren’t fused together yet and could be knocked out of place and not grow together right. We went to Forero’s, where Rebecca was, and ended up eating lunch with them. Sure are nice people.

Took Rebecca to piano lessons and picked up Karen Austen to watch the boys while I ran errands. Went to the tire shop and got the flat fixed, stopped to talk to Barbara Austen for a minute; picked up Rebecca; went to the post office and grocery store; went up to the telephone company office to get insurance forms; went home and took Karen home but left Rebecca and Jeff home for a few minutes. Fixed a light dinner; washed the stack of dishes; ironed some of Bob’s shirts and a couple of blouses. Packed up and went over to Florence and Leonard’s to get vegetables. Leonard fixed me a light drink and we had some berry pie. I picked lettuce and squash and then we drove out to the ranch. Florence had put ointment and gauze on Jeffrey’s elbow. I had to carry both boys upstairs to bed as both had fallen asleep in the car. On the 15th Bob called around 3 p.m. as he’d just gotten back from his pack trip. He had a good trip and saw a lot of country. 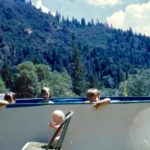 The children and I painted a drawer I brought up from the barn. I put wheels on the backside of it and Jeffrey had it under his bed as a toy box. He could lift up on the handle and pull it out. While we were painting the drawer Jeff found an enormous caterpillar on the Virginia Creeper that grew along the south side of the porch fence. We put it in a jar and I hoped it would spin a cocoon but it just kept eating for a number of days. Then, instead of spinning anything where we could see it, the caterpillar burrowed into the dirt in the jar to make its chrysalis.

I’d gone out to kick in the pool, exercise and cooling down, around 9 pm. Bob was upstairs resting and the kids in bed. “I looked up in the meadow and saw a big bear heading down towards the orchard. I came up to the house and told everyone to look out the window, which they did. I put the dog back in the house so she wouldn’t take off after it. The bear came down into the orchard and sat down for a minute looking up at the trees. After a thorough inspection, as if to say, ”Hmmm, I’ll come back in a few weeks when they’re riper.” It went back up the meadow towards the fence and went into the trees, almost opposite the pool where I was once again kicking. The children were pretty impressed with the bear.”

The next day was another hot one. Bob cleaned up his camping gear, washed his camping clothes, then took the tractor down to the creek. We went down and brought him home. Then he and Rebecca and Jeffrey went down (Clarke was napping). They got only as far as the pelton wheel though when he discovered a kink in the cable, which had to be fixed. After coming home for a swim break they went back. “I fixed hotdogs, salad and chocolate pudding and Clarke and I joined them at the creek around 6 p.m. for dinner. Bob and Rebecca moved a few more rocks after dinner and then we came home while he did some cat work.”

Clarke loved the pool. He’d say he was dog-paddling while I provided support under his stomach, kicking vigorously. His favorite book then was Little Black Sambo.

On the 18th we were in town again for swimming lessons and the library, as well as lunch at Varney’s. We stayed that night and the next evening took the children to Florence and Leonard’s so we could go to Lewiston for the Trinity Forest Forum. We sat with the Engles. The program was a slide show and talk by a man from Humboldt State on the work they were doing studying silver salmon, steelhead and trout in Manzanita Creek—very interesting. We got back to Florence & Leonard’s about 11:30 and talked until after 12:00. The children had a good time. There were lots of other children there and they played in Florence’s flower garden.

Cheryl came out with Michael one afternoon, driving with one arm. They ate dinner with us, leaving just as Bob arrived around 7:30. We had homemade ice cream for dessert. Didn’t get through with household stuff that night until around 10:00. Drove over to lock the gate because Bob had left it open for Cheryl but had locked the lock and she couldn’t unlock, close and relock it after her departure. 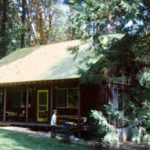 Friday Bob left at 6:30 and I had an hour to myself before Jeffrey got up. Rebecca slept until 8:30 and so was emotionally upset for a while. I was mowing the orchard when she got up and instead of getting angry when she stomped upstairs I went back to mow. Then decided a little kindness might be in order (rather than having my own tantrum) so I went down and took milk and fruit up to her in bed. It worked! For both of us. A few minutes later I had to come back down to put baking soda on Clarke’s foot because he’d stepped on a bee. By 11:00 the mowing was finished and I was having a cup of coffee.

A day or two later the children and I drove out to the Joneses place on Boulder Creek, driving through thunderstorms after swimming lessons.
We stayed overnight. Angenett and children were there and their friends, the Newcomers, arrived later. I took two watermelons and started homemade ice cream. Alice helped me crank it. We had a delicious dinner outside while swishing yellow jackets away. After dinner we went down to the creek and built a big bonfire. Marshmallows were toasted and s’mores made. After the children were in bed we talked and had some wine and kept talking after Horace and Alice went to bed.

After we’d gone to sleep (outside in sleeping bags), I was awakened around 4:20 by a crying child and by flashlight found Clarke on the other side of the fire looking for me. Fortunately he hadn’t stepped into hot coals. That’s where I’d been when he’d gone to sleep and we were talking but then he didn’t know I’d gone to sleep right beside him.

Rebecca, Jessica and Hope really separated themselves from the boys to play. They ran all over both sides of the creek. Jeffrey and Cedric seemed to get along quite well. I spent about an hour down at the creek with Clarke. It was very nice and there was a shallow pool with a sandy bottom for him to play in. I made boats for him out of bent pieces of bark with a leaf for a sail. After lunch we packed up and went back to Weaverville where we met Bob. Hamburgers at Babe’s Café and then out to the ranch, Bob and Rebecca came out in the truck, bringing sand and wood.

Bob took Rebecca into Weaverville with him, leaving in the truck. She stayed with Florence who took her to swimming lessons and picked her up. The boys and I got along pretty well except I did miss the reassurance I had when Rebecca was there that they weren’t into something or doing something hazardous. I washed the upstairs windows and a few of those downstairs. Cut half the wood that Bob had hauled out and stacked it on the porch. Jeffrey took one and a-half wheelbarrow loads and stacked them. I had to push the full one down to the house for him but he managed to get the empty back up, not an easy job for him. Took the boys down to the creek for half an hour from 5:14 to 5:43. No sun on the pools but close around. Came home and made a blackberry pie. Got the boys to bed and fed Bob, Rebecca and myself when they got home a little before 8:00. 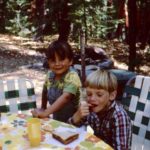 The next day Bob was going to Victorville to attend some meetings to decide what was going to happen with the Weaverville office when he was no longer district manager—in August. His title was going to be Planning Systems Analyst but it wasn’t terribly accurate. He really sounded happy to be getting out of personnel work and being by himself in a more research type situation.