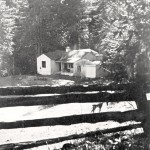 Over the last few months I’ve been reading, copying and, in some cases, typing material that my mother wrote as a young wife and mother.

At one point she was writing about life as a State Park family, with the assistance of a family friend, but as she also wrote, this resulted in two different styles of writing. I didn’t care what the styles were. It was her story, even though unfinished, and a fascinating read. I retyped the story and added pictures from her photo album. The resulting self-published book I sent to my brothers as gifts and a niece and nephew have purchased their own copies. I imagine my children will want a copy at some point. It was exciting for me to see the cover, with her name as author…the story published after all these years.

More recently I’ve been copying, and in some cases typing, letters that she wrote to her mother when she was pregnant with me. This going back to my parents’ younger years is a strange experience, a bit like going back to an old growth forest whose paths I skipped along as a child but this time going slowly and observing all the understory—the mosses and ferns, the way the vine-maple leaves are green in spring turning to yellow, orange and red in autumn, the surprise of discovering a bird’s nest; hearing the rapid trill of a wren from the shadows and the ripple of the stream that I had simply splashed through in those early years—seeing the way the water curls over one rock and bubbles around another. Sometimes the trail reaches outside of the forest and winds up over rocky bluffs where twisted pines frame views of a distant lake.

My parents had lived next to her parents in Riverside, where my two older brothers were born, but later moved to Healdsburg to live with my father’s parents, an arrangement that lasted only three months before they found their own place. She was pregnant with me. Both they and my brothers missed her parents a great deal and she wrote long letters to them several times a week. My grandmother saved those letters and I am the lucky recipient. Typing all of them seemed too big a chore and after typing a number of them I switched to scanning, finally figuring out a way to do this as a pdf rather than as a jpeg. Treated as a photo the pages are much more clear but take up too much space. Pdfs are a much more reasonable size. How strange it is to be dealing with modern communication hassles while immersed in history. In one recent page my mother was excited about getting a phone in their new home, which they are renting, of course. Their ring is one long and three shorts—a party line. She’s cooking on a wood stove but they’ve splurged and bought a two-burner electric stove (she called it plate) so that breakfasts can be prepared more quickly.

My father, in this most recent reading, has been working 10-14 hour days, six days a week, and taking one college class at Davis on the 7th day. The income and outgo financially tell a lot about the difficulties of work at that time. He is doing most of the building, wiring, etc. on a winery start-up, getting paid 60 cents an hour and happy to have it. Rent for the house is $25 a month. It will cost $40 for the doctor for my delivery and $6 per day for staying in the hospital. She bought a pair of cords for each of my brothers for $1 each from Penney’s. For furniture they are going to buy two lawn chairs and my mother will make cushions for them.

I feel a bit voyeuristic looking into all the personal family dynamics going on during this stressful time of their lives. My father worked very hard to support his little family and my mother did as well. She also loved flowers and struck up a friendship with one of the neighbors near their original house who gave her seeds and cuttings for a flower garden. And in that Napa Valley yard there were figs and cherries and grapes for the eating. Of course my mother wrote a lot about the two little boys as well.

Going back and forth between that time and the present sometimes puts me in a mood, but that’s ok. I only wish I had known, and been receptive to, about all this while they were still alive. My mother wrote very detailed letters and I am grateful that she did so. Grateful also to my grandmother for saving them. I’m using great self-restraint and not reading a letter until just before I copy it. My appreciation for my parents continues to grow.