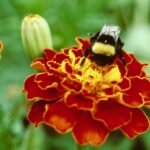 Just got Rebecca and Jeffrey to bed after reading three days worth of “Survive the Savage Sea”. 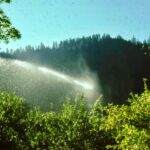 The previous day had been partly cloudy with a few showers and at one point there was a lovely rainbow behind the house, arched over the creek, lengthwise.

I picked a big bowl of green beans and froze a quart and picked a gallon of blackberries. Made a blackberry pie and about a quart of jam. We had baked chicken and our first corn, one ear each, from the garden for dinner.

Today was foggy until around 11:00. I got up at 7:30 and around 9:30 we all went down to the creek so I could help Bob who had been there a couple of hours already. I made plugs for three holes in the form, using the coping saw—nailed two in place. By then it was lunchtime so Rebecca and Clarke and I came up to fix lunch. Jeff stayed down to paint the plywood forms with oil. Rebecca stayed at the house while Clarke and I took lunch down. We met Jeff on his way up and I gave him an apple to sustain him. All three children hauled tie bolts (?) from across the bridge to this side this morning, 47 of them. 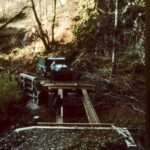 After lunch Bob and I hauled the forms over to the abutment and he tied them in place with the ties through the holes. Then I started cutting small strips of edging and nailing it in place. Couldn’t seem to get the idea of angling the corners so just did straight ones. Clarke helped me for a while and played happily by himself the rest of the time. We left at 4:00 to come home where Rebecca and Jeffrey had been all afternoon.

I cleaned the bugs out of the pool and mowed the lawn. Half way through the lawn mowing I stopped to scrub beets and put them on to boil and later to stick the ham in the oven. After dinner we reversed our bedtime roles with Bob reading to Clarke while I washed, swept floor while he washed; I read to Jeff and Rebecca while he washed, etc. Beautiful big, puffy clouds around all afternoon. I should have taken pictures. 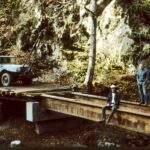 I’m nearly through with “The Making of an Un-American” by Paul Cowan. 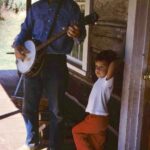 On Saturday, August 23rd I said that Wednesday I helped Bob again—measured, cut and fitted six small edging boards and nailed them in—this took a couple of hours. The children loaded scrap lumber with some assistance from me into the rack truck. During the afternoon they stayed at the house for a couple of hours (playing in the shade on the back porch) while I took lunch down to Bob. After we ate I cut 23 six-inch 2 x 4 pieces for the form. Made blackberry ice cream.

Thursday morning we went into town. I bought groceries, presents for Jeff’s birthday, did five batches of laundry, took the children to Van Matres where I got shoes for Clarke and a shirt for Jeff (both on sale) and new suspenders for Clarke (for 75 cents). We also went to the library. Ate a dinner of hotdogs and buns, potato chips, grapes and ice cream sticks for dessert. We left for the ranch around 7:00 p.m.Bob had called from the ranch just before we left to go out saying he was coming in for another load of gravel, after having unloaded the first batch. We passed him on the highway as he was heading into town.

Friday he and Rebecca unloaded the 2nd batch and went into town to bring out a 3rd. That day I did some damp mopping in the kitchen/dining room area, folded clothes, picked blackberries and made several pints of jam. Worked with Clarke a little on reading. Cooked a chuck roast and cleaned stuff out of the refrigerator.

Saturday we all went down to the creek around 10:00. Bob an hour before that. I’d fixed a big breakfast—scrambled eggs, bacon, toast, tomato from our garden and slightly green peaches.

We worked until 1:30 and then the children and I came home to fix lunch. We were hauling concrete cribbing. Bob would lift them with the boom truck from up on the turn and haul them down to the bridge site. Sometimes I’d run the winch and sometimes he would. We worked out a system where he did most of the rigging and I guided him in the truck and ran the winch a lot. The first four pieces were hard because they had to be exactly placed and level on their gravel bedding. The other pieces were not so difficult but still it’s slow work and we finally quit at 7:00 when we were both making mistakes. The children played quite well – with trucks and bulldozers in a pile of dirt along the road and down at the creek. They enjoyed playing on the cribbing as we built it up also. It would be impossible to do all that lifting (the big pieces weighing about 1500 pounds) without the boom truck.

I don’t really mind helping out too much except I resent the whole project for making it a laborious summer with no pack trips and no time for me to be by myself. At least with the cribbing you can see progress being made and I think Bob really appreciates the assistance.

Dinnertime was kind of a hassle but I told the children on the way up that they would have to take showers while I fixed dinner. Bob got a shower too and read to Clarke before dinner so that was taken care of. All three children had showers last night and washed their own hair, even Clarke, so they were a little dubious about two nights in a row, but they were really dirty.

While we were u p on the turn, a big hawk flew down above the stream, appeared confused and lit in a tree across from us, then flew again above the road on our side of the creek. I called to the children who also were able to get a good view. 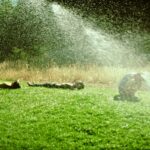 Sunday we were down at the creek by 9:30. Bob and I hauled the last three big beams and two little ones, struggling to fit them in. There wasn’t much room to maneuver the truck and we had to do a lot of shoving. It’s amazing how much can be done with a crowbar. With the last beam on the creek side we could only put it half way along its course. Bob built a ramp out of 2 x 4s to hitch it the rest of the way with the “come along”. 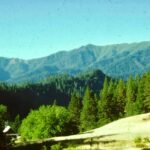 After lunch (which was at 2:00 again) we unloaded the racks from the back of the boom truck into the concrete bin. Then went up the road and loaded the truck. Unloaded. Loaded and unloaded. By this time it was after 6:00. I brought the children home and fixed dinner. Got them fed; got Clarke read to and the floor swept (including ten minutes for broken dessert bowl). Bob got home around 8:30 and we ate. Had lots of leftovers, fortunately, so we had those plus corn from the garden and salad. I was so tired during dinner it took a lot of effort to not start crying.

There are many photographs of the whole bridge-building process, at least four slide-containers, but I don’t want to mix any of them in the wrong order with wrestling them out of the metal holders. Someone, someday, may want to chronicle it and I hope they do.