Wednesday was the last day of the sparrow/finch identification class and we got a bit damp around the edges. But our search near Fern Ridge Reservoir, at the end of Royal Avenue, resulted in our seeing the last two sparrows on our list, the Grasshopper and Savannah Sparrows. The Bureau of Land Management (BLM) has been improving wetlands habitat here and they’ve also established a couple of paths In the area.

While we were searching for these two birds we had the good fortune to have three different kinds of swallows perch on a wire fence just a short distance away so we were able to clearly see the differences: cliff, barn and tree swallows. 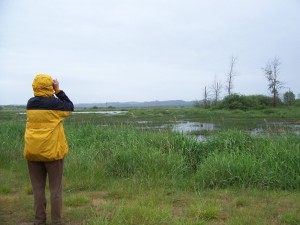 At first the rain was just an occasional shower. As we headed up a different route that would bring us closer to the reservoir we saw two different American Bitterns, something we all had hoped to spot, although they are not a common bird. The first one made a quick flight across our path but the second paralleled us for a ways and offered a great view. They often hide in their marshy habitat by pointing the bill up and being quite still so that their streaks make them seem like just more grass. Their sound, from a distance, is said to be like a mallet driving a steak or two rocks being cracked together. At closer range it has been described as an aquatic pump sound. When it flew, with legs stretched out behind and beak reaching forward, I could see that the neck had a kind of pouch in it, similar to that of a great blue heron in flight. The bittern feeds on fish, amphibians and aquatic insects, and nests in clumps of grass in a marsh. This solitary bird is most active at dusk but perhaps the rainy day was helpful in making them more active during the day.  I felt really fortunate, having seen only one before.

At the reservoir viewing-platform we were able to see gadwalls, black terns, purple martins and others but the cold and rain made most of us migrate back to our cars. Adding up species seen by both the Sunday and Wednesday classes we tallied 91! Thanks to Dave Bontrager for this great class!

Today I hurried over to the other side of town (South Eugene) to take in the ribbon-cutting ceremony at the Wild Birds Unlimited Nature Shop, recently opened by Barbara and Dan Gleason, long-time birders in the Eugene area. Dan has published several books on birds and Barbara is an excellent bird artist. 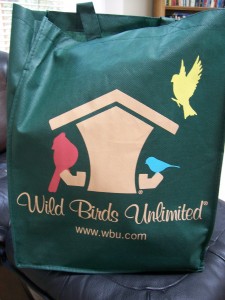 The store is bright and cheerful and carries something for everyone interested in birds from binoculars to books and from seed to suet. I left with a new bird feeder, a couple of other items, and one year’s membership that will give us 15% off on bird food purchased there.

Congratulations to Barbara and Dan!