Where is a good spot to take a long hike on a warm summer day? June 7th, three other women and I hiked the length of Silver Creek that’s within in the state park and includes 10 magnificent waterfalls, several of which you can walk behind and five of which are over 100 feet tall. The day was warm but we were actually in shade a good portion of the hike. This early in the year the sound of the falls fills the canyon. This was an Obsidian trip meaning the person who volunteers to lead a trip picks  the hike and those of us who want to go sign up to accompany her/him. This was the first all female group I’d hiked with as an Obsidian hike.

I’d been to Silver Falls several times before but had never hiked the full length of the trail, about eight miles counting the route back along the edge of the canyon.

The park is about 20 miles east of Salem and approached through rolling farmland and scattered Christmas tree farms. The road winds through some low hills of the Cascade Range before suddenly entering forested landscape and the park. Silver Creek Falls is the largest state park in Oregon at 9,000 acres. Elevations range from 1,000 to 2,200 feet and the yearly rainfall is about 85 inches, keeping this remnant of temperate rainforest healthy. The park offers a variety of activities including camping, fishing, swimming and horseback riding and includes a number of historic buildings.

Geologically speaking, the entire area used to be covered by the ocean, as was most of Oregon, 26 million years ago during the Oligocene Period. Fifteen million years ago, basalt flows (Columbia River Basalt) covered the sandstone left after the ocean retreated. Over the years, Silver Creek has eroded the sandstone leaving the hard basalt over which the waterfalls plunge today. These are the areas also where crews were able to build trails behind the falls.

The park area was originally a small logging community known in 1888 as Silver Falls City. The area was heavily logged but in the 1900s but a photographer, June Drake, campaigned for park status for the area. I noticed one of the smaller falls along the creek was named after him, Drake Falls. In 1935 President Franklin Roosevelt turned the land into a Recreational Demonstration Area. More private land that had been logged was purchased. The Civilian Conservation Corps built many of the park’s facilities including the South Falls Lodge. Silver Falls State Park became a park in 1933. 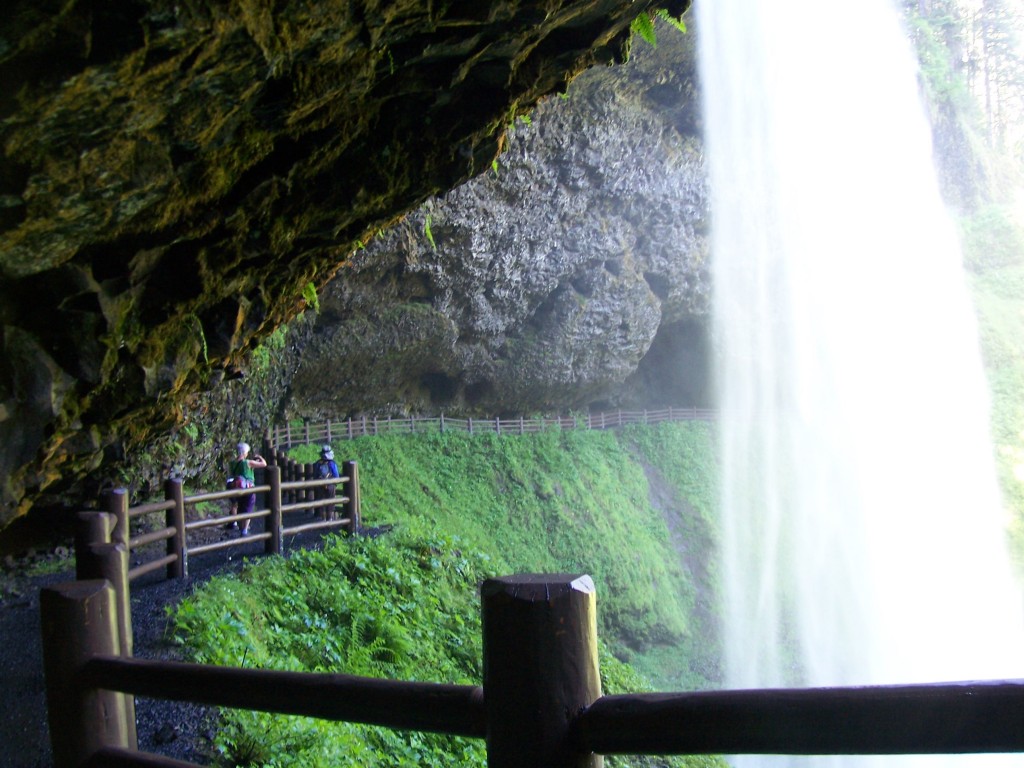 The atmosphere in the canyon was almost tropical as we descended and lush growth along both sides of the stream added to that effect. Walking behind the falls we were dampened by the spray and I’m sure invigorated by all those negative ions emanating from the falling water! At the north fall the underneath of the basalt lip extending over the trail was decorated with licorice ferns hanging upside down.

At the trailhead, just before we headed down to the South Fall I could hear black-headed grosbeaks singing from nearby trees. Along the stream we were most often serenaded by wrens calling from the shrubs. I did see several dippers (water ouzels) flying along the stream and, if I’d been by myself, would have spent some time searching along the edges of the falls for that bird’s moss nests. Some of the flowers that we observed included nine-bark (just beginning to flower), thimble berries, bleeding heart (mostly past), and vanilla leaf. As we walked we picked occasional salmonberries to munch upon as they were quite abundant along the trail. It was not only an experience in tasting berries but also a tactile experience, our fingers brushing the soft fronds of maidenhair ferns and the lacy, white flowers of  goatsbeard. Trees were mostly Douglas-fir but there were also western hemlocks and red alder as well as big-leaf maple and vine maple.

It seemed as if every school in the Salem area had decided to have an end of the year field trip on this day but the kids all seemed to be having a good time and enjoying being outdoors. One teenager saw us eating salmon berries and said he’d been waiting to find out whether they were edible before tasting.

I felt, as I often do when hiking in the Pacific Northwest (including the Klamath Mountains to the south of us in extreme northern California), that we are quite lucky to live in an area offering such beauty.