April 14th: Bob was in Laytonville that day. The next day he was in Garberville and then home Thursday night.

That weekend he and Dave rode out to the ranch on a Honda. He cleaned the spring and did some watering. We were having problems with our nearest neighbor out there and his feud with the US Forest Service on access. I took the children out to the airport and we watched two planes take off. Then we went home where I fixed a lunch and we went out to Rush Creek Campground and had a picnic, using a tree stump for a table. They had a good time throwing rocks in the creek and pieces of wood for boats.

The previous Saturday we had gone out to the ranch. The U.S. Forest Service hd the road cleared Thursday and Friday. We enjoyed being out there again. Threw re lots of apple blossoms, and the lilacs were just starting. Inside the house there were a lot of dead flies and there was mouse dung, which I swept out. Because it was so cold we ate lunch in the car. 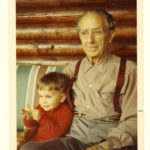 Uncle Stanford’s wife, Gertrude’s funeral was during this time. Bob was a pallbearer but I didn’t go. Too much going on and I was really tired. I took the children with me to my check-up –Jeff had such a croupy cough that he couldn’t get his breath. Rebecca got to see blood pressure taken and listened to the baby’s heartbeat. Jeff was put on antibiotics and Dr. Breeden said if got really bad that night to take him to the emergency room.

The day before that I made butter from whipping cream using the mixer. The children were delighted—especially when the buttermilk splashed them.

I went to my music class but left early so Connie Martin (a favorite sitter) wouldn’t have to cope with Jeffrey. I had told her to keep them up as long as possible and they were still up when I got home. He breathed better when he was up.

In May I went to an ecology class in Redding, starting on a Friday night. I went down with Dottie Murphy who taught third grade at Weaverville Elementary School. She was living in a trailer at Indian Creek Trailer Court. While we were at the class I met Warren Bailey and his wife—I had botany and zoology from him when I went to Shasta J.C. Stephanie Mills gave a talk on population We got home around 11:30. The next day the class continued and after fixing breakfast and lunch for Bob and the children I decided I’d better eat elsewhere or “the demands wouldn’t cease”. So I ate at Babe’s and then drove to Redding. I was home by 5:30 and had dinner started when Bob and the children got back from going out to the ranch. That Friday morning the children and I had delivered May baskets to Florence and Doris.

Sunday Bob put up a swing in the cedar tree for the children. I started scrubbing the walls and ceilings in the kitchen. Funny how you go on cleaning binges while pregnant. Later that morning I took the children over to Wilkin’s so we could watch them shear their two sheep and admired the new goslings. “The shearing was fascinating—sheep doesn’t kick around, just lies there.”

“Now we’re fighting in Cambodia—much student reaction in the colleges. “

June 3rd: I worked for Dorothy Underwood in the library that morning—I’d quit May 22nd.

“There was a thunderstorm around Big Bar yesterday afternoon. Bob, on his way to Garberville with Lonny (Pool?) got Lonny to fly over the ranch on their way so he could see what things looked like. The children and I drove out there this evening. We left at 7:00. We met Bob McChesney driving out. He said the fire was up near the upper ranch and under control. Trucks, jeeps and a couple of Hondas were parked in the meadow above the orchard—helicopters kept coming in and landing to load and unload. It appeared to be going up the Big French Creek drainage, looping around the upper ranch, landing in our meadow, taking off and going around the point into Big French Creek. We got home around 9:30.”

My notes now were often long after the fact. Rebecca celebrated her birthday at home with just us and Uncle Peter came over just as they were going to bed. She was pleased. A few days later she had a party from 10-12. Winnie the Pooh invitations went out to 8 children. Cake was Winnie the Pooh also. They made crowns and played pin-the-tail on Eeyore.

Sometime during June there was a meeting with the USFS and others on the proposed wilderness area.

Bob met with some environmental people to fly over the proposed wilderness area. They were going to land at Ft. Jones and hike in to some place near Cecilville and stay overnight. He was to come home the next afternoon.

Bob and Dave Ohde went with Herb Upham to Berkeley where Ted Lewis gave them a grand tour of the engineering department including views of pictures taken under an electron microscope. They stayed overnight with the Lewises. Hard to remember but I think Herb was a promising high school student that both Bob and Dave wanted to encourage.

On our 7th anniversary we drove to Lewiston for dinner and ate at the Lewiston Hotel. Then we drove around the lake and also up to look at the new reflector site.

Ohdes had bees and they gave us some honey they had extracted. They started collecting honey at 9:30 at night and finished at 3:30 a.m. 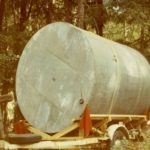 One evening after work Tom drove out to Trinity Center to look at a large galvanized tank that someone wanted to sell. He bought it. In early July we drove to the McDonald’s place on Coffee Creek to pick up the eight foot galvanized water tank. Bob had spent all the day before building a wooden frame to fit on the Coot trailer. (Coot trailers must have been made to carry the offroad Coot vehicle. I had no knowledge of that. Maybe they used it at the store. I had to look this up.). The McDonalds only used their place in the summer. Their daughter and her family were staying there. There was no power. The place looks out across Coffee Creek toward Billy’s Peak. Deep, irrigated pasture –water from a ditch ran into Boulder Creek. It was cloudy and cool that day. We ate lunch that we’d brought at Uncle Stanford’s visiting with him for about an hour, then drove back to Weaverville. He dropped us off at the foot of our driveway and we walked up to get the VW and drove out to the ranch to watch Bob unload the tank up above the meadow. It was 7:00 by then and we had to get back to town because the Coot trailer had no lights. While Bob returned the trailer I drove down to the A&W and got hamburgers and root beer. We’d had graham crackers and Cool-ade before leaving the ranch. 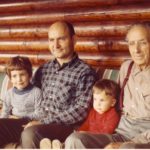 That Monday Rebecca was sick. After a couple of days she was better but then her temperature went up again. Jeff went to Dennis Hooper’s birthday party. Both children were invited but I kept her home.

Had some good visits with Angenett and children. One day we went swimming with them out at Mule Creek where it runs into the lake. Rebecca and Jeff loved it. They’d never been around that much safe water before and were able to run and splash and play alligator till exhausted. “I wore my pregnancy swimming suit and paddled around a little too.” I remember it was black and had a red rose right over my belly button.

We took the children to the 4th of July parade. I wrote that it wasn’t much of a parade that year. Got a pink helium balloon for Rebecca and a green one for Jeffrey. They loved it when they got them home and could let them hit the ceiling and still have the string within reach. Some “cave men” scared Jeffrey and made him cry. Bob and the two children were sitting in the sun on the curb; I was standing behind them in the shade. I tried to get to him in time but didn’t make it. I remember cave men in a parade in Dunsmuir, one of the few we ever went to, coming up to me –all sweaty and scary. After dinner that Saturday we went out to the ranch. Really hot out there too. “I started out the day removing a mouse nest with dead mice from the closet and scraping a maggoty one up off the floor. Ugh.” After breakfast of bacon and pancakes Bob mowed the lawn, which was very deep. Rebecca worked voluntarily in a phonics book while he mowed. Jeff colored, played with various toys. I let them run through the sprinkler before naps and later. “I spent most of the day sponge-mopping the floor-made me feel a lot better about the mice, flies, etc. Also weeded the strawberry patch which is being thoroughly chewed by grasshoppers.”

When we got back to town around 9:30 at night the house was hot and crawling with ants. Got the children to bed (Jeff with a temperature of 102) “sponge-mopped from our bed in the living room to the kitchen to get rid of any sticky places and to squash ants. Then started on the stove area, which was swarming. Bob found an army of them coming into the house up the wall of the addition. He soaked the area with water and washed off the wall, which seemed to help. Was up about every half hour that night with Jeff whose temperature was 104 at 7 a.m.”

The next day was my check-up and I’d lost four pounds. Rebecca went to Jessica’s birthday party. I took Jeff to see Dr. Breeden who prescribed some stuff. That night was another croupy night for him. He was better the next day but still not well. I took Rebecca to Mary Ann Field’s for Spanish lesson. (I’d forgotten we were trying to do that with our eldest children. Not sure that lasted very long. Maybe with Maria?)

Bob went to a historical society meeting to report on the smoke/fire alarm he had installed for the museum.

It was September 11th before I wrote anything again in my journal. Clarke Stanford Morris was born in early August! Took him a long time to decide it was time to arrive and then came quite suddenly. Dr. Breeden, rushing, was locked out of the hospital and that created a bit of a stir. Then someone momentarily put his cap on over his eyes. 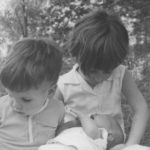 “Three is a lot more than two so far as care and maintenance are concerned.”