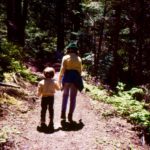 Reading these journal entries and looking back on our life then, from where I am now, all these years later, is a bit like being my own grandparent. Sometimes I think, really? You said that? Or you thought that? Why didn’t you……? And once in awhile—Good for you! As a couple we were at a stage where we were still sorting things out about life—what was important to each of us, what was important to us as a couple—and we had two children, two homes, and not enough time or money. In some ways all of these issues continue through one’s life but gaining maturity gives us more strength to deal with it, to weigh things with fewer distractions.

Another day I noticed, from the upper end of the meadow, a very sweet, strong smell drifting up and finally tracked it to a large madrone fully in bloom.

Rebecca and I were delighted to discover that we could get books from the elementary school library. So we started getting books downtown AND from the elementary school. I also started taking her to nursery school to see how she would like it and to give her more interactions with other children.
I was still looking into employment possibilities and interviewed for a job at Junction City School but didn’t get it. One day I subbed for Marne Wilkins in the high school library. Jan Hooper watched the children.

I needed to make an exhibit for the museum “in my capacity as Natural Sciences chairman” and wrote to the Sierra Club in Arcata and to Humboldt State asking whether they had information about plants used by Native Americans. This was long before the days of Google!

La Grange Cabin: Florence invited us to a potluck picnic at the cabin on the La Grange Ditch. I made a salad, carrying Jeff in the pack in the process because he wouldn’t let me put him down, and we drove up on Weaver Bally. “It’s small and has dove-tail corners just like the house at the ranch. Hal and Dorothy Goodyear went too and the men measured the building. They’re hoping to move it down to the museum. The La Grange Ditch used to run right under it. Many maples around. Quite dark. We sat on the ground near the cars and ate. Drove back to Weaverville and went to the museum to look over a possible site.” When we got home Jeff had a temperature of 101. No wonder he’d been fussy.

Mid-May: “This morning I saw a small (about 13 inches) garter snake, with yellow stripes, swallowing a toad that appeared to have a body length of about 1 ½ inches. The snake had just the head in its mouth when I spotted it in the driveway, right beside the truck. I got my camera and Bob and Rebecca came along to see it. We watched while the snake continued to swallow, apparently elongating the toad. Finally, after about ten minutes the feet of the toad disappeared into the snake’s mouth. With the toad about 1/3 of the way down its body the snake glided off and went into a small hole, where it remained. This took some doing as the spot where the toad was stuck some.”

A trip to Seattle: In late May we drove to Seattle, via Scott Mt. and Callahan. Stayed in Ashland the first night. They were building a new indoor theater for the Shakespeare Festival. We spent two nights in Nehalem with my parents 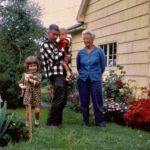 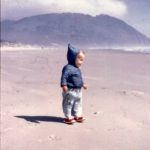 and then went to stay with my eldest brother and family in Seattle. We went on a ferryboat ride one day 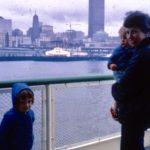 and that afternoon Rebecca and Jeff had their first escalator ride. The next day we all, including my brother and family, went to Bellevue and visited a college friend and her family (Nancy Piper Garing and husband John). This was followed by a trip to the zoo. That Saturday we drove to the N. Cascades and took a hike to where we could see Glacier Peak on the way in. Very lush growth. Rebecca walked the entire way, two miles. 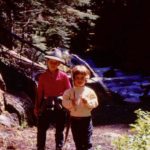 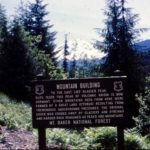 Back at the house Rebecca and Dana took blankets, pillows, books and flashlights and fixed up a “campsite” behind the furnace. Rebecca’s favorite part of the whole trip.

On the way home we left the freeway at Eugene and, in Oakridge, ate sandwiches that Jan had fixed for us, along with milkshakes that we purchased. We stayed overnight in Chemult and the next day drove through Crater Lake and then home. Saw an antelope near Doris. When we got gas in Redding the starter wouldn’t work so we had to get a push. 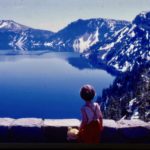 Jeff was trying hard to talk, pointing to things, wanting to know their name. He was rapidly learning new words.

On the 9th of June we still didn’t have the washing machine out at the ranch yet because we hadn’t officially moved so I washed some diapers there with the scrub board. Frank Walden told us “hippies” had been packing off things from summer homes from Big Bar to Corral Bottom. He wanted to put in a gate down by his place so people couldn’t get up behind him.

Our neighbors in town decided to not let us have an easement to run a pipe across their property to join the town sewerage system. They were willing, though, to give us a corner of land plus an edge behind the garage where the roof overlapped their boundary in exchange for a survey and $250.

Moon Lee and Cal Pacific were apparently much closer to an agreement on Cal Pacific taking over the water system, which would eventually lead to our being on a town system and not using the ditch for our water. Dr. Polka and the health department were involved.

On Rebecca’s birthday I made a Smokey the Bear cake. Cheryl helped out some at the party. Guests were Jenni Hooper, Nancy Van Duyn and Scotty Field. The children made crowns, unwrapped presents and ate. Peanut butter sandwiches, cheese sandwiches, carrot sticks and cool aide, then cake and ice-cream. 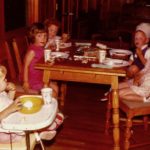 Bob went to Victorville for a week as part of his job. I drove to Redding with the children and picked up Tigger (the cat) from the animal hospital where he’d been left the day before to get neutered. We then went out to the ranch. When I went to show Rebecca the baby robins, pulling down a branch of the maple tree, the only remaining baby flew out of the nest, while the parents had hysterics. I chased him and put him back in the nest but by evening he’d gone.

Question from Rebecca one evening at bedtime, after having gotten up numerous times: “If I had two noses, would I smell with one and breathe out of the other?” Around 4 a.m. I’d brought Jeffrey downstairs to get him a drink of water and discovered “the largest scorpion I’ve ever seen crawling across the floor between the stove and the sink—3.5 to 4 inches long. I put Jeff in the rocking chair and killed it with the edge of the flyswatter.”

The next day we walked up to the bathtub settling tank (carried Jeff most of the way) drained and cleaned it. The children played in the little creek near the tub. Came back and I opened the valve below the house to drain all the muddy water out. While the children were napping I cut two chunks of wood into stove wood and kindling; cut grass around the raspberries; cleaned out the irrigation ditch in the orchard; cut grass in and around the driveway.

That Friday we went back into town and in late afternoon drove to Redding to pick Bob up at the airport. While backing out of the driveway I remembered I hadn’t combed my hair (was dressed up and even wearing heels). I got out of the car, leaving both children there, hurried into the house and into the bathroom. Then I heard Rebecca scream and, looking out the window, saw the front of the VW disappearing. I raced through the kitchen and out the back door and got to the car just as it came to a stop against a row of rocks that kept it from rolling down into the trees. I comforted Rebecca (who fortunately hadn’t tried to get out the door I’d left open) moved the car, turned it off after putting it in gear and firmly set the brake. Shaking, I went briefly back into the house before we left.

On Sunday, after dinner, Bob had to go up on Oregon Mt. because of problems from a thunderstorm and didn’t get home until midnight. For Father’s Day he got the book “On the Loose” and a hairbrush.

Our rather frantic lifestyle was beginning to get to Bob. I was terribly busy with small children and trying to keep two houses relatively clean and tidy but I didn’t have a required daily commute and a fulltime job outside the home (s) to deal with. In mid-June he was “again quite discouraged about trying to keep up two places and the driving involved. He has even mentioned temporarily abandoning or even selling the ranch. Sure hope we can work on a compromise of some sort. I understand, I think, but am so fond of the ranch and living out here in the summer. But the drive back and forth every day must be tiring and he has things he wants to do get done in town. He had some inventions in mind and the addition was going to include a large table with plugs all around it for electronics. ) I love the isolation out here and the chance to walk in a beautiful spot even though tied down by household things.”