At one point during that summer I decided I wanted to live in a tent. So my dad found the old family tent and set it up for me up in the Gully. It was a big canvas tent with a wooden ridge piece, ropes and pegs. The Gully refers to a little creek that ran down the side of a meadow near our house. The banks of the Gully were lined with blackberry bushes, willows and other shrubs. And along the non-meadow side, the side closest to our house, Ponderosa Pine trees and ceanothus were the main foliage. It was among these small pines, about 200 feet from the house, where my temporary bedroom was erected. My bed was a canvas cot.

Ours was the only house at that time and there were no city streets with street lights. At night the only light was from the moon and the stars. When I wrote in my diary from the tent it was while holding a flashlight.  I can still see those daddy longlegs quivering upside down from the ridge of the tent above me. I think they were probably harvestmen, which are arachnids but not a true spider. There are many other entries into the diary on these days but I’ve chosen just references to sleeping in the tent. 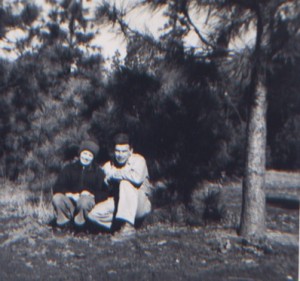 My father and me with the Gully pine trees behind us.

Sunday July 10, 1952 There have  been thunderstorms for the past week or two and we’re having another tonight. Mary  (my mother) came with me while I got ready for  bed and we talked a while.

July 11 I am lying on the cot in the tent writing this. The tent is in a small group of pines about 200 feet from the house. If I look closely I can see the light of the house and the car lights as they go by on the highway (old Hwy 99 beyond the house). I can hear the sprinkler going  around and the swish on the leaves. It’s peaceful here. The time is 5 minutes to 11.

July 14 Came up by myself tonight (the previous night my mother had walked up there with me). I’m a trifle uneasy but having fun.

July 16 Richard woke me up at 15 minutes after 7 this morning but I didn’t mind too much. The only trouble is we only had about 5 hours sleep. B. (my eldest brother) came up last night to see how we were which was very nice of him. I wish Richard had stayed again tonight because it’s lonesome here and he’s good company.

July 19 Richard helped me bring a mattress up for the cot……I killed two daddy longlegs in the tent.

July 23 I practiced on the accordion up here tonight but the mosquitos were numerous. I killed another daddy longlegs in here tonight.

July 25 There haven’t been any spiders in the tent for two nights now. Knock on wood. It is now 26 minutes to 11 and I had better go to sleep.

July 31 For the first time in several weeks I am in bed and ready to go to sleep by 10 o’clock.

August 3 Practiced accordion. The moon shines on the tent and makes it pretty light in here.

August 5 Mary  walked up with me tonight to see how the moonlight looked from inside the tent. She left a few minutes ago. It is 5 minutes after 11.

August 10 20 minutes after 11. Startled a deer in back of the tent tonight; also a small frog by the back steps (on my way to the tent?). Took him in the house and he hopped into Mary’s lap. Turned him loose in the garden.

August 11 Moved back to the house. Watched a porcupine in the locust  tree below the house this evening.