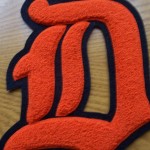 Sorting through some boxes a few days ago  I came across a bright orange “D” wrapped in tissue paper, a relic from my days at Dunsmuir High School. There were 38 students in my graduating class.

Today, women playing competitive sports are not unusual. Haven’t they always played? No, indeed. When I was in high school (1952-1956) girls in our school played only within the school. We didn’t travel. Perhaps we were lucky, at that time, even to be given opportunities outside of the gym classes.

I was never that good at sports but loved to play. After all, I’d grown up with three brothers and we’d always lived outside of town so my presence as a person to fill a position was at least grudgingly appreciated. We played baseball (workup), football, and basketball. Our dad had put up a basketball net along the edge of the parking lot at  the shop building at Castle Crags State Park where we lived. We hiked, skied, and swam occasionally in the Sacramento River or in a very cold, spring-fed pool near Castle Creek, outside of the park.

There were limited sports available for high school boys. I don’t remember there being tennis courts at our school but we played badminton in the gym. Nor do I remember a track. There was a field of some sort and downtown a football/baseball field near the swimming pool. In looking through the yearbook I see no baseball or track photos, just football and basketball (perhaps a reader can correct me on this).

Our girls’ teams were allowed to use the gymnasium for games during the lunch hour and more than once we got in trouble for being late to the next class after playing, showering and eating during this one hour. I played basketball and volleyball during these times. I participated in athletics all four years and my photo is in the yearbook, along with the rest of those who belonged to Girls D, wearing my borrowed sweater. Such things as class sweaters and class rings were not in the family budget during those lean times. In some ways it was good that we didn’t have funding for girls to play other schools because I wouldn’t have been able to stay after school to practice nor been allowed to go out of town for games. Our parents told one of my brothers he could play basketball if he could fine a way home after practice. For three weeks he ran the six miles home, sometimes along railroad tracks, and taking shortcut through the woods. It was too much.

Title IX came into being in 1972 and required gender equity for boys and girls in every educational program that receives federal funding. Up until then the primary physical activities for girls were “cheerleading and square-dancing” according to one source. Only one in 17 girls played high school sports before passage of the bill. Senator Birch Bay of Indiana was the author and chief Senate sponsor of Title IX.

Yet today there are still some quibbles about this bill, which also addressed other activities such as access to higher education, career education, math and science, etc. Some think it takes funding from men’s sports by requiring equal funding. Some think it doesn’t go far enough. I’m sure this legislation will continue to evolve.

As for me, when I watch women playing sports–and I especially like to watch volleyball or downhill skiing or track–or when I see my eldest granddaughter playing soccer, I  nearly always think “YES! You go girl”.