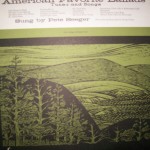 Yesterday folk-singer Pete Seeger died at the age of 94 and today many of us are posting our memories and our thoughts about him on Facebook and elsewhere. Unlike some of the writers I never had the pleasure of seeing Seeger perform in person. But he occupied an important place in our household when my first husband and I were married, and our children were raised with many of his songs. Later John Denver joined our albums. Somewhere during this time came the Clancy Brothers and Harry Belafonte. I’ve also always like Swiss and Scottish music. All that mixed with classical albums. But Pete Seeger was one of a kind.

It was from Seeger’s album of How to Play the 5-String Banjo that the children’s father learned to play and although his repertoire was small he learned those few pieces and the accompanying words quite well. Old Dan Tucker was one of his favorites. I played an accordion, mostly polkas, Irish music, a few folks songs, but did not have the capacity to sing as well as play. For me it was too much like patting one’s head and rubbing one’s belly at the same time. He was good at it.

As the children grew older some of these songs helped us get through road trips and livened up the days of young childhood at home. I still have several of Seeger’s records including two children’s records Birds, Beasts, Bugs & Little Fishes and Birds, Beasts, Bugs & Bigger Fishes. They include such songs as Fly Through My  Window, I had a Rooster, Frog Went A-Courtin’, I Know an Old Lady, Skip to My Lou in the Little Fishes album and The Keeper and the Doe, The Fox, The Frog and Old Blue in the Bigger Fishes. The Little Fishes album cover is held together by masking tape. Peggy Seeger’s children’s album is also in my collection.

There was a time when people like Pete Seeger, Joan Baize, the Weavers and others were able to express through their music much of what some of us had trouble expressing in the spoken language. He spent his whole life addressing social issues through song. What a different place this world would be if all humanity could do that!

I must admit it brings tears to see people whose words and music were such an important part of my life disappearing. My children remember Pete Seeger’s music and their father’s ability to sing and play. Their children won’t have these memories although I’m sure they will have their own nostalgia. Perhaps I just haven’t been exposed to them and am just showing my elder-person bias but, so far as I know, none have since performed with such talent and meaning.

With a song Pete Seeger helped clean the Hudson River. Just that one deed could be a sufficient accomplishment in a person’s life. But he helped “overcome” or bring to attention many more important social issues in his lifetime. He was there. And he noticed. And he sang. 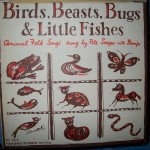 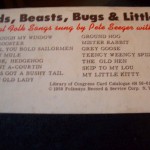 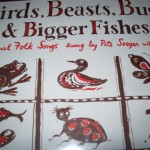