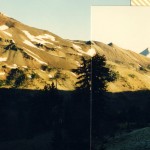 I moved to Oregon from Weaverville, California in March of 1989. It was not an easy transition going from the little mountain town where I knew most of the roads, numerous trails, and where I had a good many friendships made over 25 years. But I joined my soon-to-be husband here in Eugene and tried to get used to what I considered city living… and the rain. One thing that made me feel at home was the bird life among the conifers in our back yard on the lower slopes of Spencer Butte. And I 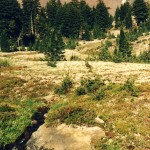 discovered that there were hiking trails not far away.

In August of that year my eldest brother and a friend came to visit and he wanted to take a backpack trip. His friend taught elementary school and he wanted to help her find a volcanic bomb to show her students. Volcanic bombs are sometimes formed when lava spews out of a volcano and its spinning forms an almost egg shape. They come in all sizes. When I worked at Crater Lake I once found a very small one, about the size of a potato, but my boss made me leave it there since no one can collect such things in a national park.

Oregon has many volcanoes so a logical place to go looking was in the Three Sisters Wilderness. I suppose it’s illegal to collect a volcanic bomb there too but maybe a picture would suffice. I gathered my gear and we drove the three hours to Green Lakes Trailhead, which follows up Fall Creek for several miles. There were lovely waterfalls and the weather was 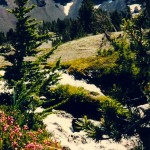 perfect. Green Lakes was heavily used even then so we headed off at the pass, slanting across Broken Top Mountain. My brother led the way and after some searching we found a place with a great view of the Three Sisters near a stream that ran down from above, pitched our tents, and ate dinner.

The next morning I was treated to a dramatic view of the South Sister out the front of my tent as the sun slid down her slopes. I hiked further up the hill for some early-morning photos. When we were ready to leave we hiked back to the trail and continued down to Green Lakes for a closer look and could see back up Broken Top to where we’d camped, then headed up the trail to return to our car. My brother, as part of his hiking ritual, liked to leave beer in a small ice chest in the car so that when he’d had a warm hike, he could refresh himself before heading home. We each had a beer, changed our shoes, and then drove back to Eugene.

A few days ago, an article in our local paper, The Register-Guard, by Bill Sullivan (a local hiking guru with vast and accurate knowledge of Oregon trails) noted that now the best time to go into that area is via snowshoes or skis when there is still snow on the ground. He noted that Green Lakes basin is so popular in the summer that people have to camp only at numbered sites. In Oregon, no campfires are allowed within 100 feet of any lake and campers are supposed to pitch tents back away from lakes, preferably screened by trees or shrubs, so that others may enjoy the scenery. This seems a good rule to me. I suspect Bill Sullivan may wish he’d not been quite so explicit about the good places to go hiking and camping. But who could have forecast that the town of Bend, a relatively short drive from 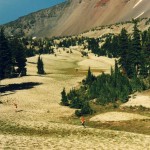 these Cascade trailheads, would grow so quickly.

About 15 years ago we discovered the same “camp in designated spots” rule when day-hiking at Mt. Rainier when we came across a backpackers’ campground with numbered posts. A backcountry ranger patrols to make sure this rule is enforced. To me this totally negates the backpacking experience. Being close to others is not why I used to backpack.

Oh, and we didn’t find any volcanic bombs.