The afternoon that I got back from hiking up Glennison Gap, Candy Fields came with Carin and left her with us while she went to a nurse’s meeting. Clarke tried to bug Carin by waving his hand near her face but Jeffrey took her under his wing.

Bob Gravette called and asked whether I would help in making a survey for Shasta College and I said I would.

Rebecca lost two teeth in one week—one while biting into a dill pickle and the other by biting a hard snowball.

My mother was in the hospital in Seattle again having surgery on her hip.

On Tuesday, the 25th, there was about five inches of snow on the ground. Bob Hooper picked up Rebecca to take her to school and Dennis Hooper came over around 10 to play with Jeff. I was going to take the truck out and get chains put on at a service station but decided to put chains on the VW myself because it was easier to travel with children in the VW than in the truck. It took me about ½ hour to get the chains on what with cold hands, feeding children lunch, and general struggle with the snow. I took Dennis to school and went to the post office.

Later Alice Jones came over with a tape from Peter for me to listen to with her–describing a meeting with some prominent conservationists including Brandenberg, who is the head of the Wilderness Society. Things got very political within the conservation organizations. Peter was doing some studies on the Redwood National Park area as well as other forest types. He was in Wisconsin looking over forest practices there.

After Alice left I got Clarke up and we went over to the elementary school for a conference with Rebecca’s teacher. We decided to start having Rebecca stay after school on Mondays to see whether she can get more accomplished on a one-to-one basis. “I really think most of Rebecca’s time there this year has been wasted. It’s not the teacher’s fault. She has some real rowdies in there.” I brought the Hooper’s kids up to our place so they could attend their conference. 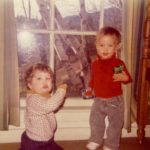 Best buddies from way back.

The next day I took Jeffrey and Anne Marie out to Warm Mt. School. The door on the driver’s side of the car was frozen shut. Took off the chains by the Meyer’s place. The road from the Hayfork Highway out was slick with a skim of packed snow. I stayed awhile and played my accordion. Clarke was into everything including paint, which he got all over his hands and face. Jeff wanted to leave when I did so he came home. Rebecca went to public school that day because she had some things about Japan to share. It was snowing hard and we took the truck over to get chains put on.

I was supposed to go to Redding Friday for training for the Shasta College survey but needed to take the car, not the truck. I managed to get one chain on but not the other. George Halcomb came and plowed our driveway and I made it down to Oregon St. but couldn’t make it up the hill from there so I called and cancelled. The meeting down there started at 9:30. A couple of hours later I would have been fine. Discovered I’d done something dumb with the chains, twisted one and that’s why it wouldn’t go on. Put the other one on upside down—things like that seem to happen with hurrying and children. (these were real chains, not the cable things most use now) Bob called from Bakersfield and was to fly to SF that night, drive to Palo Alto and go to the library at Stanford and then come home.

Bob Hooper gave Rebecca a ride to school again. Sharon Kennedy, from Lewiston, was going to come to the house to show me how to do the survey on Monday.

I was working on an article for Ranger Rick Nature Magazine about how Linda Ohde lived on a lookout.

“Rebecca came home yesterday from school and told me there would be a third World War. She said a boy in her class said that someone had made a bomb which could blow up half of the world. She added nervously, “Things can be settled by talking instead of bombs.” She didn’t want to discuss it with me—I have always hoped I guess that I would somehow be able to protect the children from that particular horror. It is terrible for a child to become aware of something at so young an age that parents have no control over. I hope that they will be able to get enough out of the good things that life offers to counteract the potential horrors. I still have a nightmare once in a long while about jet planes flying over low and dropping bombs. This started during the Korean War. How horrible it must be for youngsters who are actually living in those war-torn countries.”

I subscribed to the Redding Record Searchlight.

February 7th—Just got back from the music class and am sort of watching Sonny and Cher on TV. 25 people showed up for the class including Fred Esselink and Mike Quinn. I was especially pleased to see Fred there and catch up on what he’d been doing.

The snow was gone and frogs were croaking. Rebecca stopped going to Warm Mt. School at her request and I started sending Jeff three days a week. We decided to try to lean on Weaverville Elementary School to do more for her. I visited her classroom one morning and Bob and I had an appointment with Meg Challis.

Bob went to Garberville Wednesday and got back Friday. Saturday we all went to Redding to look at pianos.

I started interviewing people for the Shasta College survey. It took time but was interesting.

On February 12th I took the three children to Florence and Leonard’s for us all to stay overnight. Bob had gone to Garberville. We were there so I could go skiing at Mt. Shasta with Bev Forero, getting up at 6 a.m. She was taking her two daughters and two of their friends and a 23-year old family friend. I tried to sleep in the same bed with Jeffrey (Rebecca refused to, she said he kicked too much.) He kicked too much. Not only that he had a croupy cough and was restless, poking me in the eye with his fingers. About 1 a.m. I moved into bed with Rebecca. She kicked some too. After I got up I drove over to Forero’s and had some breakfast. It was foggy and cold. We stopped in Redding so some of the children could rent skis and arrived in Mt. Shasta about 10:30.

Bev and I stayed on the rope tow. I took half an hour off for lunch and another half hour later. Otherwise, I was going up and down until the tow stopped at 4. It was a beautiful, clear, warm day and I had a marvelous time–the snow was packed powder. Took a lesson in the afternoon—all those years I was trying to ski I didn’t know I was supposed to edge the skis in on a turn—sure makes a difference. We munched sandwiches on the way home and got back to Weaverville around 8:00. I went to get the children and found that Bob had come home that night (I’d not expected him until the next day) and had taken the children and their luggage home. So I went home. Jeffrey and Clarke were asleep but Rebecca was waiting up.

A couple of days later I was still sore from holding up the rope. It was really heavy by the end of the day.

Rebecca, Jeff and I went over to see the Wilkin’s raccoon. (not sure how long they kept it but a nephew had given it to Al). It was about 8-months old. Really cute but a pest. Marne described it as part cat, part badger and part possum. It was very active and kept jumping up to grab the leg of the adults or Jeff’s arm. And then it chewed. When it was on its back it drew its hind legs up like our cat did so the claws could rake. Its fur was soft and three to four inches long. The rings on the tail were quite narrow and a reddish brown. The toes were long and slender. It loved water and played in the water from the hose when Jeffrey held the hose. It had learned to open sliding and folding doors. Because it kept jumping up we didn’t stay long.

Bob went to Garberville again for a couple of days. I went, with the children, to pick up Christi Forero and brought her back to watch the children while I went to my music class and then to a film Dave Ohde was showing on ecology narrated by Ian McHarg. The last 15 minutes were the most interesting—land use overlays were used to illustrate. Others there included the John Fields, the Murphys, Jean Breeden and two of her children, Jane Armstrong, Chuck Hamilton, the Wilkins. Then went back to music class and practiced. I think Bev picked Christi up.

On the 15th I got the car lubed, etc. and a tune-up. In the afternoon after ballet, we went to the grocery store to get tangerines, oranges and nuts to take as gifts to Moon and Dorothy Lee for their Chinese New Year open house. We bought some red paper in which to wrap them. After dinner I went over to get Patty Forero to stay with Clarke. He cried but she said he soon calmed down. We walked over to the Moon Lee’s. The children took their flashlights and gifts. There were a lot of people there and a number of children. The kids seemed to have a good time. Jeffrey spent a good deal of time sampling goodies and was quite open about asking for more. He had had a nap so was fine but Rebecca was tired and we left around 9:15. Bev picked up Patty.