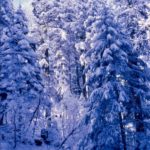 There was a week in January, 1972, when Bob was out of town and we got several snowstorms. January 24th –Did housework and ran errands in the morning. At noon Jeff and Clarke and I went over to Florence’s to have lunch. Then, leaving the boys there, I went up to hike on the Glennison Gap Road. 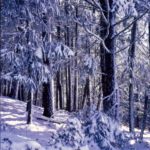 “It was a a great hour-and- a -half. I walked up to where there was snow, in places up to six inches deep. Snow coated the trees and the sun was just beginning to make the snow fall with little soft splats. The silence was complete except for the noise of the melting snow—and an occasional call of a nuthatch. I did see deer tracks and what I think were fox tracks. I walked fairly rapidly, stopping only to take pictures and admire the scenery; my legs were aching, and I was panting pretty heavily going up the hill. Went about ½ mile past the 2nd forks (where the sign says Glennison Gap 2 miles). By then the snow was to my boot tops and it was time to turn back. The wind must have been strong up there as one side of the trees was covered with fluffs of powdery snow.” 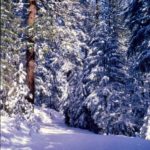 There are no angles in snow,
no angles where snow covers the road
or coats the trees;
no angles where it covers angled rocks and boulders;
no angles where blue shadows fall
or where my footsteps press the flakes to the earth.
Angles there may be in sunlight’s sparkle—
but the dappled smoothness of shadow and light helps
create the silence and beauty of fallen snow.

Rearranged a few words but otherwise this is as I found it in my notes. 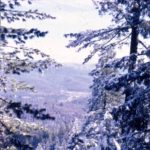 I hurried home just in time to catch up with Rebecca walking up the driveway after school. Picked her up and went to get the boys.