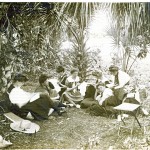 In 1944, Dorothy, a young girl at the time, went with her father to Ohio to meet his mother, who was 82. She had been married to William Malone, who died at age 48. Dorothy’s father had been only 10 years old when his father, William, had died. Dorothy’s grandmother was Josephine Malone whose last name had been Quinby.

After her marriage, Dorothy and her husband began doing some research and first went to Wilmington, Ohio where they stopped at the Historical Society. To their surprise the Historical Society had a file folder about the Malones. In this folder were newspaper articles, as well as letter written by a professor at Malone College. (This is the first I’ve ever heard about a Malone College). Her brother and his wife accompanied them. Her brother’s name is also Hezekiah Pennington Malone.

Her brother called the professor and soon they met him to continue the discussion.
My Hezekiah P. Malone was also the great-grandfather of Dorothy and her brother.

The Quaker farmers were John Carl and Mary Ann Pennington Malone. She said they had nine children, not eight, and named them: Hezekiah, Alice, Charles, Levi, Frances, Edwin, James, John and William. Her story pretty much matches my mother’s. Dorothy and her family were shocked to learn that the Malones were active in Dunedin, Florida because they live only a short distance from there. 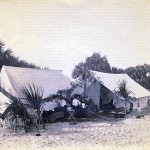 When they got home they went to the Dunedin Historical Society and discovered a lot more information about the family. While my mother’s story was that Hezekiah was the first Commodore of the Yacht Club, Dorothy said it was Levi. Who knows? I don’t even know what a Yacht Club Commodore does!

Dorothy said the Historical Society has information about the family, the homes they owned, the activities they were involved in. She said two of the houses still remain. I think I have photos from my mother’s album of two houses there.

There is an island in Clearwater Bay called Malone Island. Apparently Levi Malone owned half of the island and they built shelters and had social gatherings there. I’m thinking this might be the island where my grandmother and her young women friends camped. I have photos taken there—cooking over a campfire, gathered in the shade of large tents. And they called their hideaway Camp Adamless Eden!

Dorothy said the family had a reunion in Dunedin in 2002 and she has met many cousins she didn’t know she had. Her grandfather and her great-grandmother (Emma Hart Malone)—mine as well– are buried in Dunedin. 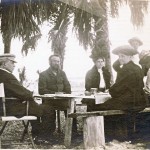 How to dress for a picnic on the island.

Now I’m trying to contact the Dunedin Historical Society to see whether they have an address for Dorothy or are interested in copies of the photos. What an amazing trip this has been!