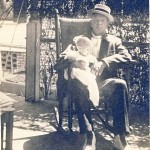 All the brothers apparently became quite successful. As my mother put it “stout, satisfied-looking business men. They looked like illustrations of the times—America booming, expanding, and they right along with it.” In 1925 she remembered visiting Walter Malone’s family in Dunedin, Florida (where many had summer homes) and said “all had the same apple-cheeked, fresh complexion he had.”

Louis, the youngest, was the problem child. “At various times Hezekiah sent one and then another brother to Mexico to manage the mines so each gained experience and knowledge and could make intelligent decisions from then on.” Hezekiah, being practical, had gone along with the custom at the time of paying off Mexican officials and handing out gifts when necessary. Louis refused and “imposed various restrictions and prohibitions and special taxes.” So the Mexicans confiscated one of the mines. This became known in the family as “Louis’s Million Dollar Mistake”.

My grandmother grew up in Cleveland but also lived in Montpelier, Indiana and in southern Ohio. In C 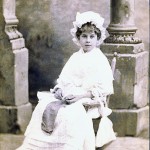 leveland Hezekiah “built her a big playhouse with a real little stove, pots and pans and dishes and she had a Martha Washington costume, complete with cap, to wear in it to serve tea to her younger sister, her mother, or any visitors.” Her brother was quite a bit older than she was and her sister (Bess) three years younger.

She loved horses and always had her own. She rode bicycles and she and her sister were the scandal of Cleveland when they rode—in public!–in the first bloomers seen in the town. Grandmother had them made in New York of heavy velvet—yards and yards of material.”

Hezekiah “had trotting horses, which he raced all over the country. He had one of the first automobiles in Cleveland. The whole family traveled a great deal.”

Hezekiah and his brothers liked Dunedin, Florida and built several houses there. “They started the Dunedin Yacht Club and grandfather was the first commodore. They went to spend 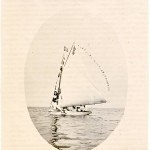 winters for many years and each person had his—or her—own sailboat, which he or she sailed around the bay and across to the island, and down the coastline.” My great-grandmother’s boat was the Albatross and my grandmother’s the Windward.

Apparently Hezekiah had respect for women’s intelligence and my grandmother and her sister were allowed to travel alone. He was a 32nd degree Mason and he had Masonic rings made for the girls so that if they ever needed help they could get help from a Mason.

I have no idea what happened to all that wealth in the intervening years but I’m glad my mother was able to write down her memories of the family history. to be continued