Ranger families could not have dogs when we were growing up in California State Parks. We had one during the Second World War but the ruling must have come after that. At the time, we had an Irish Water Spaniel. She had nine p 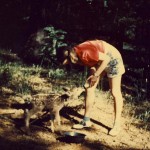 uppies and we kept one. When we moved, we left the mother, Curly Locks, so that she could have a life as a hunting dog, for which she was trained before she ended up with us. Unfortunately, our little puppy ate some some salmon, got sick, and died before we moved from the coast to the mountains. So, no pets for us.

When we lived at Castle Crags we got lucky. A doe with a very young fawn was killed by a car and the Department of Fish and Game said we could raise the baby because we lived in the park. She was very young and needed to be bottle fed. My younger brother and I did most of the care although our mother probably started out with it. We named her Heidi. What an adorable animal! W 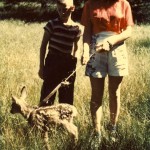 e had a leash for her and she loved taking walks with us. When we stopped for her to rest she would suck on our ear lobes! We kept her away from other people so she would not adapt to them, and might have a chance at being a wild deer when she grew up.

Heidi loved to be with us but we had to have her tied up part of the day; we couldn’t be with her con 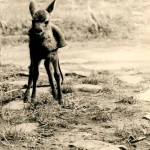 stantly. One day, when I was going to ride with my mother to the post office, I moved He
idi to a shaded spot by the little creek and tied her leash to a branch. Back at the house, ready to leave, I could see that the willow branches, which had been waving around from her efforts to follow, had stopped moving. I went down to do one last check on her and watched the light fading from her eyes as she died. Her collar was just a belt and the fastener had come loose as she leaped. She had choked to death.

We were devastated. This was a first loss of a much-loved pet. It took a long time for my brother and I to recuperate.

A few years later (1955) we ended up with another fawn, this one a little buck. His mother, too, had been hit by a car and died. He was so tiny our mother fed him with a straw, holding her thumb on one end to keep the milk in and then releasing it into his mouth. She did this o 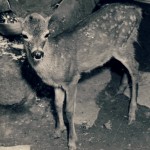 ff and on through a number of nights. When he got to where he could use a bottle my brother and I took care of him. He graduated from bottle to a bowl with a rubber glove in it so he could suck on our fingers as he ate. Pablum was added as he grew. This time our dad bought a little harness that went around his middle so there was no chance of another accident. He did wiggle out once though and, in the process, slit one ear about an inch. Our parents attached a large wool sock to the harness to make it tighter. When he got older and ran with other young deer we could recognize him from the split ear. This one we called Dear-deer and then, eventually, Guy. He was much more independent than the little doe had been, and not as affectionate. But he was a lovable handful.

As he grew, we stopped tying him up at night and he would join other deer but always came whe 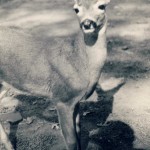 n we called if he knew food might be waiting. He was definitely a success story, gaining his independence and finding others with whom to roam. The last time we saw him he had a spike antler on each side. Guy ran up to my brother and reared up, striking out with his front feet as if to play. That showed us it was time to end the relationship. But what a wonderful experience! Every time we saw deer in the meadow or out in the woods we’d try to see whether one of them had a split ear.