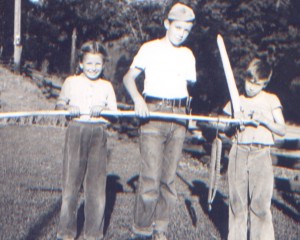 From the Diary
June 13, 1952: I was walking up below the shop in back of where Peter’s cabin used to be when I heard a noise in the bushes. I looked and saw a rattlesnake’s tail disappear in the leaves. I knew that someone was at the shop and yelled for Ben. Ben, Bill, Red, and Peter cam running. They hunted through the brush and finally, just as they were about to give up, it struck at Bill’s shovel. It didn’t rattle even once. I cut the rattles off with my pocket knife. It had seven rattles and was about two feet long.

With their triangular-shaped heads, buzzing rattles and venomous, hollow fangs, it’s understandable that people fear them. Rattlesnakes locate prey by a heat-sensitive organ located between the eye and the nostril. All rattlesnakes give birth to their young, rather than depositing eggs. A rattle is formed each time the snake sheds its skin (generally once a year) but in the early years they may shed several times and, over time, some rattles may get damaged and fall off. So counting the rattles isn’t a reliable way to judge the age of the snake.

When our family was living at Calaveras Big Trees State Park and learned we’d be moving to Castle Crags we knew we’d be moving to where there were rattlesnakes. Shortly after we made the move my two older brothers and I took a hike up Kettlebelly Road, the road that leads to the trail to the Crags. On a sharp hairpin turn Peter took a shortcut across the bend through dry leaves and disturbed a rattlesnake. The boys made me sit in the middle of the road (I was in 3rd grade) while they took care of it. We transported the dead snake back down to the house where they proudly showed off their catch to our mother and younger brother.

Our mother actually felt more secure about our abilities to cope with rattlesnakes after that and the whole family got used to them being around. We learned to walk with a lot of noise if it seemed a likely spot for a snake, to look over a log before stepping over it, and to just be aware. We even played beckon (like hide-and-go-seek except its played at night and you use flashlights for signals) racing wildly through the dark and falling over rocks and shrubs. No self-respecting rattlesnake would have remained anywhere near us!

We were told to always bury the head because otherwise yellow jackets might feed on the head and ingest venom and that this could be transferred to you if you were stung. I have no idea whether this is true but I always buried the heads.

Throughout those years at the park, whenever we saw a rattlesnake we tried to kill it although now it’s realized that even rattlesnakes are a part of the balance of nature. As an adult, living in Trinity County in Northern California (just a few mountains west of the Crags), I finally opted for the “if it’s close to the house it gets killed, if it’s out in the woods leave it be” approach. In Trinity County we lived during the summer and many weekends in a log cabin on an old homestead four miles from the nearest neighbor. With our three young children playing outdoors I made sure to kill any rattlesnakes that were near the house. Once I heard several different kinds of birds scolding below the house and walked down to see what the fuss was about. The birds didn’t fly at my approach but continued to scold, looking down into some tangled grass and fallen fence posts below the road, almost as if they were trying to show me something. The rattlesnake was so well camouflaged with its scale patterns that it was hard to see but there it was, quite a large one, escaping into the shrubs. I threw some rocks to hurry its departure. The birds grew quiet and and soon disappeared.

For several years we had no indoor toilet at the cabin and it was a big event when the hole for a septic tank was finally dug. Progress was in our future! It was my job to make sure the concrete stayed damp to cure on the hot summer days after it was poured. One day I went to spray the concrete and there, in the bottom of the hole, was a rattlesnake. I was worried that one of the children might look down at it and fall in so I climbed down a ladder, shovel in hand, and whacked its head off. It was a bit claustrophobic being in that steep-sided pit with the buzzing sound of the rattles and the coiled snake, but the urge to protect the children overcame any hesitation. Incidentally rattlesnakes move even after their head is detached. And yes, I cut off the rattles as a trophy.

Here in Eugene two grandsons and I were up on Spencer Butte’s rocky summit a couple of years ago. The eldest boy was sliding down a small rock face and I was concerned that the flat surface at it’s base was too short and he might vault off and down 10-15 feet onto the ground below. He looked over to see what he would land on if this happened and shouted, “A snake, a rattlesnake!” And he was correct. We clambered down off the rocks, as did a couple of other people, to get a closer look. One man poked at the snake with a stick as it fled into a crack in the rocks so we could hear the sound of it rattling. Not a bad thing to be able to recognize.