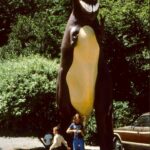 Well, we did get to the sand dunes. Went to Eel Creek Campground , a U.S. Forest Service camp, where we stopped last year. Spent about 45 minutes there and then went on. It was sunny and bright but the wind came up after about 10 minutes and blew sand along for about eight inches above the ground. It was blowing in little plumes off the top edges of the dunes like snow off a mountain. 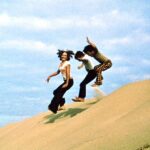 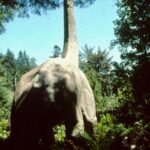 We ate at Battle Rock State Park where the wind was blowing so hard we had to eat in the car and it was hard open the car door. When we got down around Port Orford we stopped at the Prehistoric Gardens. Children under 12 paid $1.00, over 12 $1.25, adults $1.75. It is sort of a tourist trap but well done. A trail winds around among ferns, alders, Sitka spruce, etc. and dinosaurs, built to scale, peer out at you. It’s scientifically accurate and worth the price I’d say. 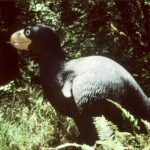 We had several narrow escapes with traffic, one being a station wagon going very slowly for several miles. When we reached a straight stretch I started to pass. It started to turn left—only signaling then. By the time we got to Brookings I was thinking of camping one more night. The children and I were all really tired. I got gas in Brookings and then when we got to the North Bank Road drove out to Jedediah Smith State Park. I was sure it would be full, and it was even though it was only 3:30. We drove on back to 101 and south of Crescent City turned off at Mill Creek State Park. The road winds down into a canyon and they had vacancies. We paid $4, bought a Sunday paper and learned that there were no phones available. We drove on down to our assigned camp (134). I left Rebecca and Jeffrey there to put up the tent, left my watch and the comics with them and drove back to Crescent City with Clarke, who was asleep. Called Bob to tell him what we were doing. Drove back to camp, 16 miles round trip. The kids had the tent up and were talking to a little girl from the camp next to us. I sent her home and wished later I’d been a little more polite about it, especially after I found out that she’d helped set up the tent, but I didn’t need any more children at that point. I was proud of Rebecca and Jeff for coping so well and I’d been worried about leaving them for that length of time. 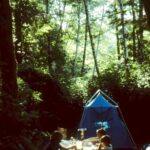 After dinner we walked down the road to where Mill Creek runs under it. It’s a nice creek, very cold, lots of minnows. Rebecca and Clarke went back to camp and put their suits on-both finally ducked down to shoulders. We went back to camp and I built a fire from twigs and some wood that had been left in the stove. I sat and read the paper while the children played. When it got dark I took Clarke to the restroom for a warm shower. He really liked that. It was his suggestion. The fog came in during the night and I got a big drip off the trees in one eye. But by the time we left in the morning it was sunny. The children fed chipmunks and Steller’s Jays, which were running all over. I had to chase the chipmunks off the table before the children got up. 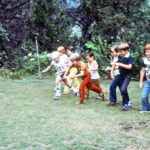 We went through a lot of fog going down the coast, coming into sunlight on the hills. Shafts of sunlight came down through it now and then. We stopped at Trinidad and bought ice as Bob had said it was very hot inland, and we had some pepper bacon that Ben had given us. We stopped at Willow Creek and bought soda pop and then stopped at Gray Falls Campground near Burnt Ranch to eat lunch. Got to the ranch around 2:00 and it was very hot.Tuesday I did a lot of laundry, cleaned the pool and mowed the lawn.

Wednesday morning, while I was fixing breakfast, I saw a coyote in the orchard. It was eating apples. Looked kind of silly but I guess they have a varied diet. I think it might have young ones nearby as Tuesday, when I went up to clean the settling tub, I saw a shiny-backed, small, animal disappearing into the brush near the mossy maples.

We went into town Wednesday. I bought a few groceries, washed my hair and packed. At 3:00 I took the children over to Ohde’s. Linda was going to take them to the pool at Wood’s. I dropped an envelope at Flasher’s for Bob and continued out to the airport.

Flew to San Francisco and ate dinner there. Then left at 8:00 for Santa Rosa with stops at Concord and Napa. It was a beautiful evening with lots of purple hills and glittering waters. Sat next to a man who works in the Santa Rosa District Office of State Parks. He said Ben (my father) was practically a legend in State Parks. Got to the Santa Rosa Airport and found that my suitcase hadn’t arrived. There was a chance it might come in on the last flight but the driver from the motel had to get back so I left. The airlines person said he’d bring it to the motel if it came in, which it didn’t. My room was upstairs toward the back half of a suite. It had a hide-a-bed couch, a bed which folded down from the wall (with a moth-eaten blanket), a bar and an ice maker which made strange noises off and on through the night.
I washed out my underwear, took a shower and went to bed, hoping it wouldn’t fold up on me.

The next morning, after breakfast, I called the airport, told them to keep my luggage if it came in, and walked to the office. Our meeting in Rohnert Park was interesting but frustrating. Spent two hours with Georgia Pacific Company getting nowhere. Fred had to leave at 12:00, Bert at 2:00, and I at 3:00 so, at 3:00 we adjourned even though Louisiana Pacific offered to fly me where I wanted to go in their charter plane! Frances gave me a ride to the airport. I ate dinner in San Francisco and was home by about 8:30.

Bob had taken the children to Wood’s pool Wednesday night, their first time swimming there with lights on in the pool. Thursday they spent with Florence and Leonard.