I used to tattle.
Yes, I did 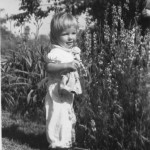 .
My three brothers– I’m third in line– say
I’d start something, make sure it was going well,
then run to tell our parents.
I’m not at all sure that’s the way it went but
that’s their version. It could be true,
or not.
We freely roamed the hills, at one with forests and streams.
Living in a state park meant no neighbors
so we had

to put up with each other…
sort of.
I had braids, wore blue jeans, had scabby knees and elbows.
We ran and slid, hiked, jumped and climbed trees,
although I sometimes hesitated coming down.

The older two taught me naughty songs but
usually left out a word or two.
Mademo 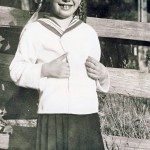 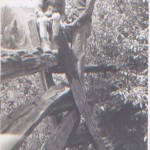 This was a wartime song and apparently there were far worse verses but this was the one I was taught. I hadn’t thought of it in years. 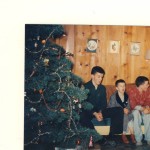 The four of us singing Christmas carols while our dad accompanied us on his accordion. 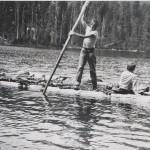 on the radio,
usually when our dad was listening to boxing. matches. 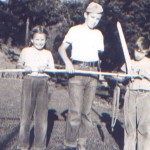 And we regularly slaughtered each other with our toy guns (often homemade from sticks) while also shooting Japanese airplanes out of the sky.
There were military songs to learn as well:The Halls of Montezuma, Cassons, and others.

Friends of my parents, whose daughter was my little brother’s age, had to deal with the dad (also a park ranger like our dad} being in the Navy.
I think we were a little jealous of his uniform and we learned her
song, “Bell bottom trousers, coat of navy blue,
we love a sailor and he loves us too.” 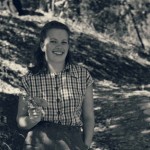 From the coast, where jeeps frequently patrolled,
we moved back into the mountains where
the war seemed a little more distant for young children.

We all grew up and eventually developed our own opinions–
on almost everything. Today our viewpoints are widely diverse
and the energy put into them has dissipated somewhat,
but we are still outspoken.

I no longer need to t 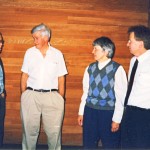 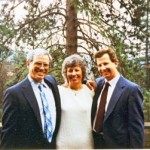