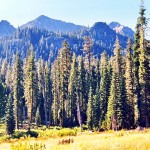 As you probably know from the news and the paper we’ve been having a lot of forest fires. This morning I can see the mountains across the valley here in Weaverville but often the smoke has been too thick to see. The worst fires from the human standpoint have been in the southern part of the county…in Pat Garrett’s and Dean Meyer’s districts. However, out in Stan’s district toward the lake there are a lot of fires in the Wilderness areas and, of course, we have this big one up behind Weaver Bally—two fires joined together and over 7,000 acres burned. They don’t expect it to be a danger to Weaverville unless strong winds come up and it may burn toward the Wilderness instead…or as well. They are putting in a firebreak and expect to backfire tonight to keep it from coming this way. They haven’t been able to get any borate planes on any of these because the smoke has been so thick but maybe today they can.

At any rate I’ve been busy trying to keep track of things, help with people and agencies communicating with each other and so forth. The first night we declared a state of emergency (local) and this meant we formed a disaster council, which the chairman of the Board of Supervisors is supposed to chair. Since both the chair and vice-chair are in the Hayfork area I became the chair…in some ways a figurehead position since Office of Emergency Services runs it but this means I have an extra obligation to keep track of what is going on. Our local park has become a fire-camp and all events scheduled there for this weekend were cancelled.

Last week I had a delightful trip into the backcountry (just in the nick of time!). I went in on Thursday and came out Sunday. I camped in the upper end of Mumford Meadows along Swift Creek. Between my campsite and the trail was a little meadow and on the other side of the trail a bank out of which run numerous springs. So I got my drinking water from the springs and didn’t drink from the creek, which at this time of the year, is quite low and had some algae on the roc 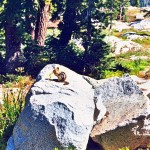 ks, etc. And there are fish in it. My campsite didn’t really have much of a view but by walking up or down the trail I could see the sunrise or sunset on some mountains. There were cedars, ponderosa pine and some kind of poplar by my camp.

The 2nd day I left camp before 9 a.m. and hiked up to a place called Sunrise Basin, a place I would love to visit in the spring. It’s rather a dry area but has a creek running through it, dry at the lower end at this time of year. All along the slopes you can see where pasque flowers bloomed and I’d love to see that. I found water at the upper end of the first big, somewhat meadowed, area and then more as I hiked up toward the ridge. At the op there were hawks riding on the thermals just about 30 feet above me—marvelous. I could, from the pass, look down into the Coffee Creek drainage toward a place called Big Flat. The trail goes on down there, about five miles away. Then I went up the ridge a little further and could look across to sheer granite faces where Josephine Lake is. Went down the basin to a place where I had found good water coming out of a talus slope and ate lunch there. Hiked back down the trail to where it divided and took the other branch and went up to Landers Lake. By the time I started up it was early afternoon and quite hot. This trail goes up through a series of meadows and is quite steep also. I’m being a little more careful about where I drink water these days so sometimes get a little dehydrated before I get to a place I trust; especially in a dry year like this. Landers Lake is really interesting because it drops a lot in elevation during the year and you can see from the dark, slab-like rocks around its edges that the water was probably 20 feet higher in the spring. I think it leaks slowly out to feed these meadows. There are some nice camping spots there and I’d like to camp there sometime also. I had my suit with me so took a quick swim and that felt so good. A couple had just arrived there with their backpacks and they were in the water also. I left so they could have it to themselves and headed back down the trail. Really a pretty area.

Mumford Meadows-the large meadow below my camp—is still green at this time of year and is surrounded by mountains, very pretty. Not as large as some of the meadows in the Alps but very nice. Someone was camped there with horses—a man and his grandson and he kept going in and out with his pack train to take some people out and bring others in—family and friends I think. I met him on the trail a couple of times.

The third day I hiked up the canyon and went up to Horseshoe Lake, which is a very pretty lake surrounded by granite and which is, of course shaped like a horseshoe. There was one tent there. I took a few pictures and sat on a log looking at it for about half an hour. It’s quite a steep climb into there also. Then I hiked back down into the valley. Met a couple on the trail—one I had met on my last backpack trip this summer—he’s a volunteer wilderness patrolman 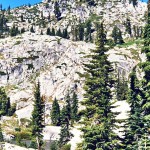 for the Forest Service. I then hiked up into Mumford Basin. Had a hard time finding the trail turnoff. That’s a steep climb also.

I love these basins. You hike up and then there’s a meadow surrounded by jagged peaks and usually a creek and some special nooks and crannies. I got worried with this one because I couldn’t find water and wasn’t carrying any. This trail, once it gets up in the basin, sort of disappears but someone had piled rocks angling steeply up toward the pass so I followed those. Eventually you can go over the pass and end up in Deer Creek or Black Basin. When I got to where the trail heads up to the pass I veered off to the left and over the next little rise found water. So I sat there and ate my lunch and then poked around some in that area. Found lots of bear sign and a bear wallow in that meadow. Went back down to the firs and larger meadowed area and on the far side, way off the trail, found a nice creek, very cold, that came out of the gravel. It was underground in the upper end. There were monkey flowers and gentians, Grass of Parnassus blooming along the edge. So I stripped and sat in a nice little pool. Hiked way up the slope from there and then finally turned around and headed back toward camp—arriving around six. I had actually planned on not being that active that day—but it’s hard not to look to see what’s around the next turn.

Now I know what all these places look like and, if I want to go camp someplace for several days, know what it’s like to get there, where the water is, etc. And I’d like to do that because you need to see how the light changes in the morning and evening—to stay overnight to really get a feel for a place. At my campsite the first morning after I got there I was standing by the creek, looking at it and drinking a cup of coffee. The creek is about five feet below the camp. I noticed movement and thought it was a squirrel but it was a weasel! I’ve not seen one before. It was moving rapidly along a little animal trail between the top of the bank and the creek. It stopped directly below me and looked me right in the eye. Really cute. Hard to imagine it tearing into a chipmunk. Then off it went. I hadn’t been in my camp between 9 a.m. and 10 p.m. at all—was always out hiking. So from 9 to 10 I sat and watched the light on the creek. And as the sun got higher, birds came in to drink and bathe in a little sandy-bottomed place under the shelter of some bushes. There were also chipmunks and Douglas squirrels, warblers, nuthatches, chickadees and some little warbler I think that would snatch bugs just above the water. I’d seen a water ouzel in the late afternoons. I got back to Weaverville around 2:30 and by 4:00 you could look up that way and see lightning.

I didn’t get back to all those places but I did get back to Mumford Meadows 11 years ago on my last solo backpack trip. That’s another story.