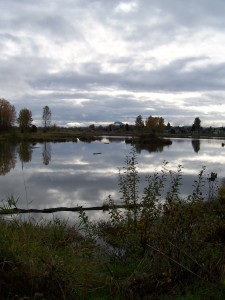 Pouring rain when I got up this morning so I put on rain pants and rain jacket and put my poncho in my little daypack. Once a month the Willamette Resources and Educational Network (WREN) sponsors a slow wander through some part of the wetlands. Today the destination was Golden Gardens Pond, several large gravel extraction areas that have become part of the wetlands.

We were a small group of six adults and two young children. Before we stepped from the street to the trail I noticed a garter snake lying next to the curb on top of wet leaves. Our leader picked it up and the children were really excited to be able to touch a live snake. After viewing, stroking and photos the snake was placed safely away from the road under some trees.

There’s a road that’s more of a trail around these large ponds and work is still being done to make the surrounding vegetation more in keeping with pre-gravel extraction habitat. Near a small bridge there was a flock of cedar waxwings in the trees and we spotted a kestrel in the top of another tree. Out on the pond was a row of cormorants on a log. Later we would see some of them stretching their wings straight out, like totem pole figures. Two pied billed grebes floated about. The small boys took full advantage of numerous puddles for splashing about in their rubber boots. About half-way through the trip the youngest one had enough so they and their mother returned to their car.

On one of the smaller ponds were numerous coots and a couple of gadwall. We heard a kingfisher and finally spotted its bright blue colors perched on a branch a few feet above the water. I found a narrow pathway leading from the trail down through a tunnel of grass to this pond, probably made by frequent travels of a nutria. Some blackberry bushes on this side sheltered several gold-crowned sparrows. During our two hours of wandering cackling geese flew overhead in large flocks agains the gray clouds. Cacklers are similar to the Canada Geese but smaller and have a higher pitched call.

I have trouble walking slowly enough on these wanders so sometimes meander off the trail to see what else we might be missing. On one of these brief excursions, about 20 feet from the trail, I found a small, wet, furry body, which was identified as a shrew once we could see the long, pointed snout. Also on this portion of the hike, a great blue heron was startled by our appearance into its peaceful domain and took flight.

Still later, just as we were completing the loop, I nearly passed by what looked like a white piece of plastic but turned out to be the skull of a nutria, its two upper front teeth bright orange. At the beginning of the trail, once again, we found the cedar waxwings had been joined by a small flock of robins in the alder trees. The alders have spring catkins now, hanging right next to their small cones. We were lucky and had no rain.