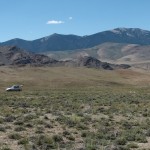 Have I said that the robins began singing LOUDLY and with great vigor shortly after 4:00 a.m.? And they were still singing, although less robustly, at 10:00 p.m. Today, our 3rd workday, we again divided into two groups.

Our group went to a site up Highway 75 and then up a dirt road quite a way. It’s surprising to drive this far and then see an inhabited dwelling, in this case a small house about an eighth of a mile past where we stopped, near a cluster of cottonwoods. These trees extended down, although more scattered, opposite to where we parked and a little beyond. We walked through sagebrush, scrambled down into the dry gulch that held the cottonwoods, and up the other side through some rather tall sagebrush. 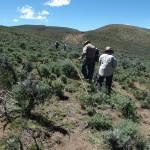 We ran the tape measure out to mark a transect and got to work.

This time I learned to do the point and drop part of measuring. One person holds a yardstick and a three-foot long metal rod. Another records. You line up the rod with a meter mark and hope the wind doesn’t blow too hard, then let the point drop straight to the ground. What gets recorded is the first plant it touches, and another if there is one under it. Also recorded is the ground—rock, sand, duff, whatever. The people who do this measure usually do a shrub cove 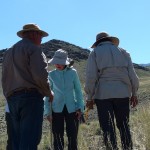 r measure as well, since both go fairly quickly.

I was always surprised by the flowers that bloom in these dry, sage-brush covered places. Generally there is a lot of space between the sage plants, more than one sees driving by. We were pleased when one of our surveys actually included a flowering prickly-pear cactus. Usually, we just saw one or two along the way to a site.

One of the more interesting aspects of this particular day was the bird we saw as we went up a dusty road. A long-billed curlew! What a strange thing, to see a bird associated with water out in this arid place. It had flown up, banked its wings, and landed again and with the window down we could hear its call. It turns out that curlews nest in places like this. Curlews 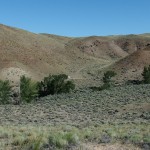 like places with sparse vegetation, avoiding places with trees or dense grass and shrubs. They eat insects, benthic invertebrates and small vertebrates. Loss of habitat is the biggest threat to their existence. Off-road vehicles can be disturbing, particularly during brood-rearing season. The crew that went out the next day was also able to see this beautiful bird.

During a break in our survey we gathered around a white, perforated pipe that was recognized as a mining claim marker. In this case though it was lying flat on the ground rather than being upright. One problem with these and other open pipes used for various purposes is that birds will sometimes go down into them and not be able to get out. 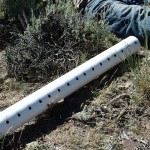 We ate lunch in the gulch, in the shade of the cottonwoods. Water must be underground there and it was obvious that it flows through during the rains. Back at the road we wondered about where the house got its water. They might have had a well but it also looked as if the cottonwoods near the building formed a circle, possibly surrounding a small pond.

From there we drove to Highway 93 and after about a mile we went through a fence and up a road, going past several cows and calves. The road took a steep plunge downward and we navigated down that and up the other side. This was followed by a quick survey transect, quick because the vegetation was so sparse. The soil was almost sandy.

Following that survey we drove into Challis to get gas in the cars and clean windshields. Some of us got a bit of ice cream as well. Riding along in the cars we learn a bit about each others’ lives through stories. This day someone brought up 911 and we could all remember where we were at the precise time of learning about it. That, and John Kennedy’s assassination. One person had taught school; one had been in the Peace Corps in Africa; one had led a number of Sierra Club hikes and enjoyed planning the menus; one had worked in Washington DC for a legislator; one had loved her job being the special use investigator/coordinator for the USFS for 15 years.

We had a meeting after dinner to discuss all we’ve been doing and what people had learned. As the meeting came to a close I offered to read one of my poems from my chapbook, Being, ( “Bear Basin”), then gave away the 10 books I’d brought and wished I’d brought a few more.