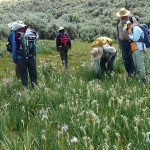 Yesterday, Friday, was the last workday. It was cold that morning and last night. The wind was very strong. I had my heavy jacket on while sitting in my tent writing.

Seven of us drove over to a place off of Highway 75 and did a transect. It was cool, some clouds drifting across, a nice change from our sweating, hot days. We ate lunch at our cars and then drove to aother site. Actually, we turned around on the first road we got on that morning—seemed a bit too dangerous to continue with gullies wa 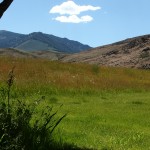 shed into the edges. The second site was much better.

The afternoon site was more interesting. We drove up a shallow valley past a private in-holding, in o 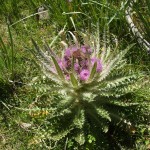 ne place stopping until a black cow got out of the road, and along where there was green grass and willows. Such a contrast to the dry sage-covered hills! It was not irrigated land but naturally wet. We made our way across a boggy area, where cows had been, by balancing on a small log and jumping onto a couple of hummocks that were above the bog. We hiked up the dry hillside and ran a transect. There was very little grass. I saw a couple of new plants—one that looked like rust-colored Indian pipe, which is actually a broomrape (which is parasitic on sagebrush), and an Elk Thistle. The thistle was growing in the very 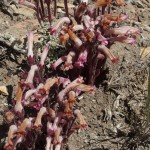 boggy area, was only about eight inches high, and quite pretty. We found two others not quite as advanced. Elk thistle, also know as Everts’ thistle, saved the life of Truman Everts in Yellowstone National Park in 1870. Everts, an explorer, became separated from his group and his horse for 37 days. Because a botanist had remarked that the root of this plant was edible and nutritious, it was the only plant he knew was safe to eat, and he subsisted on the raw root. (on-line source). 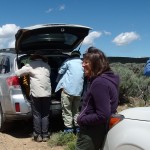 There were only 14 of us for dinner—a delicious, big pasta salad. After dinner I walked out to the tent area—the wind was blowing so strongly that my rain cover was jumping up and down on the tent—whap/whap/whap. I saw the little bunny that I’ve been getting fleeting glimpses of at night. I stood out there and yodeled with only the rabbit to hear me and he/she moved a few feet away, no doubt wondering what kind of coyote I was. I got my camera and took its picture, first from a distance and then working my way closer. 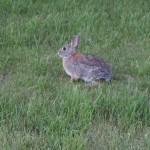 til 6:30, the latest I’ve slept the whole time. After getting dressed I started sorting some of my possessions: stuffed the sleeping bag, took all my things out of the tent, rolled up the mattress pad, took the rain cover off. Breakfast was good. Then I went back to my site with a fence wrench that I borrowed from Ronnie, who I’m sure, has every tool a person might need in the outdoors. She also cooks great meals! The wrench made pulling the tent pegs easy. I took down the tent, stuffed the poles, and put the tent and cover in its bag, then hauled everything over near the parking lot.

Tom arrived around 9:30 and after many goodbyes and hugs, we left, driving back through Stanley and beginning our journey home.