This weekend I received an email from an associate professor/insect systematist (also the associate director of the Essig Museum of Entomology) at U.C. Berkeley who had a question about Silver Slipper Campground and creek, which I’ve mentioned in a previous entry. Silver Slipper is the name of a small campground that has campsites next to Silver Slipper Creek at Castle Crags State Park. He had done a computer search for Silver Slipper. The professor is working on a large research project geo-referencing insects from California that are in their collection. He was trying to track down the location where a particular beetle had been collected and the location had been listed as Silver Slipper Campground at Castle Crags State Park. Could I somehow assist with an accurate location site, perhaps by using Google Earth? 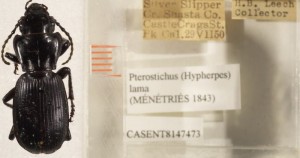 So I downloaded a new Google Earth, found California, found Castle Crags and then tried to locate Silver Slipper Campground/Creek. I found the meadow by looking north of Castle Creek and along the west side of I-5, knowing the freeway had covered the site where our house used to be. The campground was south of the meadow in the trees. Couldn’t see water or actual creek because of the tree density but I did see some dirt banks that I assume are along the creek. Put my curser on that and copied the longitude and latitude and elevation shown at the bottom of the screen. Turned out to be just what he needed! It was a good feeling to have had my blog useful for something besides my ramblings.

I finally got around to looking up information about this beetle, Pterostichus lama. It’s a predatory, ground-dwelling Carabid beetle, usually found in loose bark and rotting logs and is the largest Pterostrichus in N. America. These beetles are wingless and grow to more than one inch in length. They are swift hunters, preying on other insects. The larvae live in vertical burrows and keep their flat heads even with the ground to be able to snatch up unsuspecting prey. Pterostrichus lamas are found from S. California to Canada and from the Pacific coast east to at least as far as Nevada.