We had a dog when we lived at Van Damme Beach State Park. I think she just showed up and no one came to claim her. Curly Locks was an Irish Water Spaniel with tightly curled brown hair and a hairless tail. She had been well-trained as a birding dog, although we didn’t use her for that, and was a great pet for us. My mother told me that when Curly Locks walked past a roast resting on the oven door she would turn her head away from it so she wouldn’t be tempted. The year before we left Van Damme she had nine puppies. Our parents knew we were moving and they wanted Curly Locks to be happy so they gave or sold her to someone who wanted a bird dog. The puppies were sold except for one that we were going to keep as a pet. About that time park employees were told they couldn’t have dogs but we could keep him since we had him before that rule went into effect. The little fellow ate some salmon down by the creek and died from it. There were some very sad children.

And then, of course, there was Blondy, the cow. This was during the WWII and everyone was encouraged to be as self sufficient as possible. Plus a lot of food was rationed and families had ration stamps to use when they made purchases. My eldest brother was paid what they would have to have paid a milkman to deliver milk. He was in charge of taking care of her and of milking her. He likes to tell the story of how one time she tried to run away  with him hanging onto the rope and yelling for our dad. Blondy’s calf had been weaned not long before and she could hear it bawling. That was probably the reason she took off dragging my brother. We drank the milk and our mother made butter and cheese. 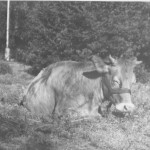 My mother had a big vegetable garden at that park and there was a goose that would wander in now and then looking for something good to eat. She named him Garlic.

When we lived at Calaveras Big Trees State Park some boys whose family was camped at the park threw rocks at a flying squirrel and injured its leg. We took care of the little squirrel until it was healed and turned it loose.

At Castle Crags there was a spotted skunk that lived in our attic. I’d forgotten about Charlie but one of my brothers reminded me. He said that when we got a new stereo (that had a good bass) at Christmas, and cranked up the volume, Charlie would stamp his feet on the ceiling. Not a good thing to have a spotted skunk doing in your house since they do this as a warning before they spray!

Once I cared for a young grosbeak that had fallen out of its nest. It slept under my bed on a newspaper and early every morning woke me up by chirping. I fed it something mixed with peanut butter. Eventually it was able to fly and I turned the young bird loose out in the backyard where it appeared to be harassed by some of the others for a while.

We raised, or tried to raise, two different fawns at Castle Crags. The first one was a little spotted doe, only a few days old, that we named Heidi. I think I was probably 13 then. Her mother had been hit by a car and the Fish and Game Department said we could raise her. Our mother got up every three hours during the night for awhile and fed her by using a straw that she would fill with milk, holding her thumb at the top as suction, then sticking it in the fawn’s mouth and releasing her thumb. In a few days we were able to use a bottle. My younger brother and I would take her for walks, sometimes together, sometimes individually. Except for Curly Locks, this was the first pet I’d ever had that could return affection. I remember a car carrying park visitors stopping and the driver asking whether he could take a picture. I had a favorite hat at the time, a kind of Tyrolian hat of green felt with a large feather sticking out of it and liked to wear it when I was walking with Heidi. I told him firmly that he could take a picture of the fawn but not of me. Seems funny now. One day, when I wanted to ride to the post office with my mother I tied Heidi up to a willow branch where she would have shade on that warm summer day. I went to check on her just before we left and found that, in trying to follow me, she’d yanked too hard and the collar (formed from a belt) had slipped. Heartbroken. (Photo is of Heidi) 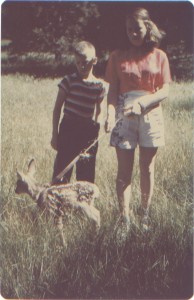 A couple of years later we received another little fawn, this one a buck, that we called Guy. He was totally different. While Heidi wanted to follow us around and was very affectionate, Guy was very independent. He also showed affection (They both would suck on you ear lobe!) but he wanted to explore. My father bought a tiny dog harness for him so that no accidents would happen. He managed to pull out of it once and the harness made a slit in his ear. This turned out to be somewhat of a blessing because, as he got older, we could distinguish him from other little bucks.

A large, folded wool sock provided padding to make the harness tight enough until he grew into it. He went from drinking from a bottle to drinking from a bowl. First one of us would put our hand in a thick, black rubber glove and submerge the glove into the milk. He would suck on the fingers. Then he learned to drink, butting his head against the side of the bowl. We added cereal to the mixture to give him enough food to last a little while.

Eventually we turned him loose and would call him at feeding time. He would come bounding down out of the woods. Guy grew spikes and we saw less and less of him as he matured. The last time we saw him he had little forked antlers and came down to my younger brother and wanted to play, putting an antler on each side of his leg. With both of these fawns we tried to keep them away from the public so that they could remain as wild as possible.

And then there was Oscar. Oscar was a very small river turtle that a camper gave to my younger brother. He kept him/her in a galvanized tub outside, with water and with rocks to climb out on. My brother fed Oscar slugs and earthworms and a little lettuce. That winter Oscar somehow got out and disappeared, showing up in the same general area the next summer.

My next oldest brother brought back a chipmunk from one of his fishing/backpacking trips. He had trapped it in his creel using a chocolate bar for bait. Our parents made him take it back on his next trip though, worrying about the possibility of bubonic plague.

One night, when I was taking out the garbage after dinner, I heard what sounded like a baby crying from up the Gully. My father grabbed a flashlight and went to investigate. It was Clawdette, a tiny bear whose mother was shot in an apple tree as she was tossing down apples for her cub. My father had turned a large galvanized barrel on its side and placed it on a wooden platform, low to the ground. This was to be the little bear’s home up the Gulley. Her crying came because she had tangled the chain, attached to her collar, around a tree. Our father wore very heavy motorcycle gloves when he tended her. Over a few months Clawdette dug a moat in the dirt around her den.  Perhaps she felt safer that way. No one tried to make a pet out of the young bear. The aim was to keep her as wild as possible. In the summer she was taken someplace away from people  but where food was likely available and turned loose. 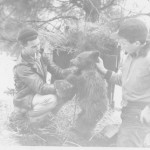