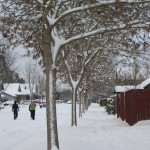 We have just experienced a week of very chilly weather that included a couple of days of powder snow sifting down from the sky. Measurements depend a bit on your microclimate including which way the wind blew, but we received seven inches. Down the block it might be six. Usually the snow in this city is wet and doesn’t get very deep or last very long so this was an unusual event. Even more unusual was how long the cold lasted and the fact that one night temperatures reached 10 degrees below zero.

We awoke one morning to find about an inch on the ground and small, dry flakes drifting down to pile up rapidly on fence posts, cars, tree branches and shrubs. Snow transforms the world into a basic black-and-white print, an etching. Tree branches on an oak that you hadn’t noticed before become a prized view to be enjoyed before the snow melts. Here in the Willamette Valley where we are used to rainfall that at times can be compared to waterfalls pouring from the sky, where the sound of running water is often inescapable, we are somewhat astonished by the silence of snow. And yet there can be muted sound. I love the crunching underfoot of powder snow and the light swish-swish of cross-country skis. Nighttime walks in the snow are a delight, particularly after the storm passes and if there is moonlight. Even starlight seems brighter than normal.

Most of the places I lived while growing up received snow, the exception being parks along the coast. So I know how to drive in it, what is needed for snowballs and snowmen and snow forts (powder snow doesn’t work), when it’s time to put chains on the car and when to leave the water running a trickle at night to keep pipes from freezing. I know that a snowfall means it’s time to keep an eye on the bird feeders and make sure they are well-supplied with food. It brings an urge to be sure that we are also well-supplied with food “just in case”. My granddaughter and I did make a tiny snow lady and her younger brother and a friend helped with gathering snow and trying to pack it hard enough. But a larger one was out of the question.

People are driving more now than they were the first few days. The packed snow on the roads is deceiving though and many drive as if it were bare pavement, not thinking about how impossible it is to stop suddenly if a child darts out or someone suddenly brakes in front of them. Yesterday I drove across town to get my hair cut and stopped at a nearby store there to pick up a few groceries, saving having to make another trip to our nearby store. We may have icy rain tomorrow.

This afternoon I walked up into the field. Others have been there during this time and there are footprints, cross-country ski tracks and many tracks of off-road vehicles that have churned through the powder down to the earth. I hope this hasn’t done damage to the field that the owner will plant with wheat in the spring and hope that this won’t result in no-trespassing signs. We are all lucky to have the use of this open space. There were a few birds in the chill, not above 28 degrees today—robins, fluffed against the cold, scrub jays, a Steller’s jay, juncos, one wren and a few sparrows. In some places the snow is melting. Gopher mounds are appearing like small brown volcanoes in a sea of white.

As I was heading home I heard it. An ORV. Vroom, vroom, vroom. A teenager roared past and began to do a slalom course through the nearby filbert orchard and the air smelled of exhaust fumes. He sped over to the next field and I silently wished with all my heart that he—have a wreck?—no, too harsh, at least he was outside enjoying the outdoors in some form—but to run out of gas so he’d have to walk home listening to the nice sound of dry snow crunching under his boots? Yes, indeed!