My father had a pistol. And he once marched a poacher in to the sheriff, using that pistol as incentive for the poacher to keep walking, when he’d caught him with his bear traps. My dad was a ranger in a northern California state park. I believe he may have owned a 22-rifle as well. 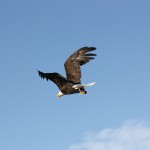 When we were children my three brothers and I played “guns” out in the woods near our house. We’d run through the trees shooting with wooden pistols one of my brothers had carved or shooting imaginary bows and arrows. I’d often circle around to ambush one of them and end up getting distracted by a bird’s nest or a cocoon and carrying it home. But we ran, we hid, we dodged: “Bang, bang, fall down, you’re dead.”

My two older brothers did some deer hunting although one had to stop because of allergies. And when I was in college I dated a fellow who hunted ducks and geese and possibly other things I wasn’t aware of at the time. He also had artistic talent for drawing waterfowl. He took me on a hunting trip once and had me shoot at a coot (mud hen), the first time and the last time that I ever shot at anything alive.

My first husband’s family were descendants of pioneers in Northern California and hunting was a part of their tradition. One fall, before we were married, I was invited to go along on one of their trips. I loved the preliminaries—hiking in to a beautiful spot and staying overnight near an old cabin, the campfire, the wonderful stories. They had even packed in my big accordion so I could play a few tunes.

The next morning we were up before dawn and after bacon, eggs and strong coffee for breakfast, we set out up the trail, speaking in low tones. The sun rose as the hunters in our group spread out to agreed upon sites. My fiance and I crept silently up a hill, edging through or around dense brush until we came to an opening where we could see across a small canyon. We waited, watching and listening. Suddenly, to our right, a large buck appeared. It walked slowly out into the open on the end of a small ridge that dropped off into the canyon below. Slowly he raised his rifle. A shot rang out and the buck fell.

I like venison and learned to appreciate the backstrap and the mincemeat pies that family members made from their hunting excursions. My husband decided he didn’t want to hunt anymore after that trip even though he had often gone with his parents. And a few years later they stopped because there were now so many hunters in the woods that they felt it wasn’t safe. I remember that Vernon, their very good friend and a wonderful teller of stories of the old days, went hunting by himself when he was in his 80s. He had to go just one more time. He got his buck. But he had to come home and get help to carry it out the next day.

One of my brothers gave me a derringer when I was living alone in an apartment in a small town. I got my permit and kept it handy for some time but finally decided that unless I knew ahead of time that bad things were about to happen it would do me no good. Usually when a woman is attacked it’s unexpected and to get a weapon out, a bullet in the chamber, the gun cocked and ready to fire, it would be too late. And the chance of it then being used by the attacker would be high. I sold it. My brother still feels badly about that I think.

After I was married we lived off and on in a very isolated spot. The first year there was no phone. Later there was a phone but it was easy for someone to cut the line way down near the highway at the beginning of our 4-mile road. And, indeed, this happened a couple of times. Not for any reason except vandalism. We had a 22-rifle that I was supposed to use for protection. Again, you’d need to know someone was coming in order to be prepared. The rifle had to be put up high to be out of reach of children. I remember taking it down one night after the children were asleep when we were there by ourselves and firing it into the night just so I would remember how it worked. One year someone broke into the house when we weren’t home and stole that from its place on top of a corner cabinet, wrapped in newspapers, along with a knife or two and a favorite quilt.

One of the boys in a 5th grade class I taught, a sweet kid, was killed several years later when he was hunting with another boy and they were going between the wires on a fence. The other boy’s gun went off accidentally.

This year I’ve had some discussions with family and friends about the merits or lack thereof, of the National Rifle Association (NRA). I’ve decided that, for me, it isn’t the guns themselves (I think it’s fine for people to go hunting, even though that’s not something I’m interested in doing, as long as they eat what they kill). But that organization sets my teeth on edge. This came to a head for me after the Sandy Hook Elementary School killings when one of their vice presidents took to the news to recommend, as he pounded on the podium, that every school have an armed guard. I know a few people quit the NRA after that, and some quit after the NRA came out against improved background checks.

I think originally the NRA probably served a good purpose, uniting hunters and target shooters in an organization that offered support for their sport. But owning guns is no longer primarily for sport or target shooting. We have become a nation of people who see danger around every corner. Not just any danger, but armed and dangerous people who are about to attack. Some parts of some cities probably fit in that category. But by becoming hyper-vigilant and expecting the worst we are painting ourselves into a corner that is surrounded by fear. Yes, fear is a good thing to have in some places. But even with the horrific shootings in recent years our world is still relatively safe. We read about these events and see them replayed over and over again on television so that they seem much more common than they really are.

You can get hit by a car or be in a car wreck any minute. Yet we still walk along roadways and get into our cars to travel. We use seat belts to make it safer. Should I have shot the man who ran a stop sign and totaled my car this year? We require driver’s licenses and obedience of traffic laws. Why not comprehensive background checks to lower the incidence of people with criminal backgrounds or psychological instability being able to get guns so easily?

I am told that there are people trying to eliminate all private citizens from owning a gun. There probably are some of those. But most people who disagree with the NRA are not trying to require that. Just tightening up the laws and requiring background checks any time guns change hands. This isn’t some kind of game we’re playing here. People advocating caution about the proliferation of weapons and advocating more strict background checks are not doing this so NRA advocates can be amused. This isn’t a political move by Democrats and Republicans; people of both persuasions have voiced similar concerns.

The NRA has a frightening amount of power, to my way of thinking. It’s as if it has become a third political party. The organization is very rich and has power over many politicians through threatening to make sure they are not reelected or are, as happened in Colorado, making sure they are recalled. No organization in a democracy should have that kind of power. It might be worrisome if even a charitable organization doing good deeds had that influence.

What kind of nation are we forming if people feel that they have to pack a gun to go about their daily affairs? What kind of people are we who feel it’s ok to draw a gun in the belief that everyone else will be grateful for your protection? Have a gun in your home, if you feel so inclined; keep it locked up except when you are going to use it for some specific purpose. Are you going to answer your door with a loaded gun in hand? Is this the kind of country those Sandy Hook children and their teachers died for? Guns are designed to kill. Go on line and look at this website to see how many children and others die every week because of our fixation. http://www.dailykos.com/story/2013/12/18/1261009/–I-can-do-anything-I-want-on-my-property-he-screamed-and-fired-three-more-rounds-GunFAIL-XLVIII?detail=email#

And if you do support the NRA, help those at the top see that you too have concerns. Show that you are tired of the talking heads on various radio and TV programs encouraging us to get out there and start shooting at each other, which is exactly what is going to happen one of these days when a shooting occurs and no one knows the identity of the bad guy. “Bang, bang, fall down; you’re dead.”