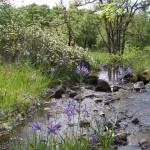 For some time now I’d been feeling a pull to have some solitude. Occasionally this is possible near our urban area even though I usually prefer going to the mountains. The regional park across the Willamette River is often very crowded on a nice day. The forecast was for 87-degree weather, not the best for hiking, but the parking lot was filling at 9:30 a.m.

Within 20 minutes I was beyond the main, graveled, trail to the summit of Mt. Pisgah and pleased to be dodging poison oak bushes, shiny reddish spring growth reaching out into the trail. It was quiet. No dogs straining at their leashes, no one sweating their way along beside me. The grass was bright green, camas showing as many seeds as flowers, a few patches of pink plectritis below the narrow trail. The pathway crosses open grassy space and a tiny stream, that will soon be dry, before entering a heavily wooded area where Douglas fir competes for space with big leaf maple and ash. It was cool and dark here and I took off my hat and dark glasses as I zig-zagged up the hill; then another bright green meadow before entering a second patch of forest.

The trail emerges about three-quarters of the way up the mountain toward the summit and winds through much drier conditions on the southwest slope. Here poison oak bushes were way above my head, fortunately well off the trail, and I saw a lizard scurry across the rocks. Here too I met the only people I saw on this trail, two men who were hiking the opposite direction. This is the one stretch of trail where I think about mountain lions. It just looks like good mountain lion country. Sometimes I’ve seen deer and this day I saw deer tracks. There are rocky outcroppings, good for spotting prey below. The hillside above and below the trail is steep with  views down to the valley floor. Just before crossing under power lines there is a spring that is damp most of the year and yesterday was decorated with birth yellow monkey flowers.

From the powerline to my goal of a peripheral stream as a lunch stop, the trail deteriorated even further. It really needs brushing and some erosion control where winter water runoff has scoured a ditch in the topsoil between relatively smooth rock surfaces. Approaching the stream area I could see white blossoms on ceanothus bushes (buckbrush) and, as the heat had increased coming down the mountain, I was happy to hear and then see water in the creek. This small stream will be dry earlier than usual this year because of our low rainfall.  This is the same place I saw a coyote a couple of years ago but today my only wildlife was a towhee buzzing warnings from his perch amid the ceanothus flowers.

I am firmly convinced that finding solitude in the outdoors is what keeps me sane, particularly if part of that experience includes running water. I found a rock perch, partially shaded by an ash tree and delved into food and drink. The only sound was the gurgling stream giving a silky sheen to smoother rocks and bubbling over others in little cascades. Water striders skittered across the more placid pools.

After lunch I took my boots off and cooled my feet. A mountain stream would have been bone-aching cold but this little creek had been running through open, sunny areas and though cool was not cold. When I stood up I noticed two equestrians, who soon disappeared, riding up the trail I’d come down. Refreshed, I gathered up my belongings and followed the stream a short distance to where the path crossed it. Here was a little pool separate from the creek and fed by seeps from a boggy area. And in this little pool were pollywogs. I hope they become adults before the water evaporates. Just then, something hopped from the grass onto the edge of the creek—a bright green Pacific tree frog, like a jade carving against the dark rock. I snapped a quick picture before it jumped into the stream and wriggled between some rocks. 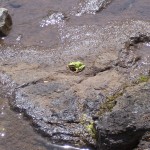 From this spot I walked back into the meadow, where camas was still blooming, and took a different trail that I knew soon paralleled the Willamette River on a mostly shaded, though muddy, pathway and would eventually bring me back to my car. The little creek follows along the path for about a quarter mile before running into the river.

Finally I emerged into a large meadow that is being restored as flood plain and it was here that I met two different runners sweating along on this hot afternoon. From there on people were out enjoying the day, although to me the heat was beginning to feel oppressive.

It is important to be grateful for those days that we are able to be outside. To be grateful for our sight and to truly see that which is around us. I saw very few birds but did see towhees, juncos, a turkey vulture soaring overhead, two lizards, and a frog. There were monkey flowers, trilliums almost past, camas, white fuzzy cats’ ears, ceanothus, fern fronds curling up toward the sun; new, soft green tips to the fir branches, bright green meadows, moss and licorice ferns on tree trunks and water reflecting the sky. To be grateful for our hearing–I heard a black-headed grosbeak singing from the top of a tree in the forested area, the buzzing warning call of towhee, the leaves disturbed by a lizard, the wind softly stirring the trees and the greeting from the two other hikers. And the silence.