Medium eggs were up to 80 cents a dozen.

After one series of stomach and other ailments on the part of children I wrote “”I think they could all have fallen out of bed simultaneously and I wouldn’t have heard!”

My dad was sounding really tired. My younger brother had given them a golden retriever puppy thinking he would enjoy taking it for walks but he was overwhelmed with it waking him up too early and other chores, plus having to take care of our mother. He said she had given him directions on cutting out material for a skirt and had sewn it up on the machine plus putting a zipper in—hard enough to do with two hands, let alone only one. So that was good news.

Rusty Kornvoldt came to help with housecleaning one day.

I found a stack of letters I’d written to my parents when I was working at Crater Lake. My mother had saved them for me. I read through them. Had forgotten a lot but also, by reading, remembered things I’d not written to them.

I didn’t write again until February 25th. Bob and I had to go to a phone company convention (Independent Phone Companies) in Monterey. We left on the 7th and I had to get a sub for nursery school for that day. Marne Wilkins talked to the night class on the 8th about creativity. 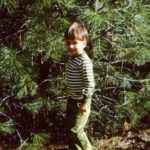 Our dog, Blacky, picked up a dead bat on the previous Friday and then licked Clarke’s face. I was worried about rabies, of course. Dr. Breeden said to put it in the freezer in a container. He called back later to say I needed to take the bat to the health department, which I did. We had to keep Blacky chained up. I wore rubber gloves when feeding her. Then we were waiting for word from a doctor in Berkeley. Dr. Breeden called and said the Berkeley doctor said not to worry about Clarke. He said the bat was too decomposed to get much of a test but that what they got was negative. Then the Health Department called and they wanted to dispose of the dog. They said that it could take up to six months to develop rabies if the bat had the rabies virus in its brain. “I was really upset. Still am not sure it was necessary. Apparently I didn’t have much choice.. So we left her there and signed release papers on the way out of town. Poor puppy.” We didn’t tell the children until they asked about her absence a week or so after we got back from Monterey. We told them she got sick and died at the pound.

Monterey was much different than I had pictured and very commercialized. Our motel was right by the freeway and the first night we couldn’t sleep. We got a different room the next night. I noted that it was a large motel right by a golf course and used for conventions.

Thursday I was invited to go shopping in Monterey with the other wives. “They sorted though racks and racks of clothes. I finally escaped to a bookstore where I bought $20 worth of books for the children. This was followed by a long lunch with numerous drinks and comments made that wouldn’t have been without alcohol. When I got back to the motel I moved our stuff into the other room. Bob was through with his meeting so we went out on the golf course where I could tell him about my weird day in private. “ That night we went to a cocktail party where I met a woman whose husband worked in Redding. She liked good music, etc. “After the cocktail party Bob and I went to a Japanese restaurant on the bay for dinner. That was fun. We sat on cushions at low tables, drank saki—had a leisurely dinner.”

Friday morning I took the car and went on the 17 Mile Drive and then to Carmel. The ocean was beautiful. Would like to have spent a full day there and a full day in Carmel. Saw seals, cormorants, etc. And looked at one tide pool—had a pink starfish in it. Spent only half an hour in Carmel. It was more like what I had pictured Monterey to be—hills, trees, lots of little crafts shops. Got back to the motel just before noon and packed the car. We ate lunch and left for home. Gave a man a ride as far as S.F.

The week after we got back I spent a lot of time calling people about joining the Shasta Community Concert Association as well as making and putting up three posters. Many didn’t renew that year and I got only four new ones. When I went to a board meeting in Redding others also reported a big decrease in sales. We were told we could keep selling so I wrote an article for the “Trinity Journal”. Thelma Riordan called and said they’d get tickets. I talked to the high school music teacher and he sounded interested. 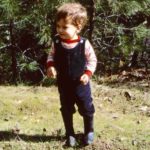 Bob spent several days in bed with a sore throat and fatigue. I mentioned that when he was stressed out about something this seemed
to happen. Probably a good thing for him to do. And that I didn’t dare succumb to my fatigue or “or I’ll never get my energy back.” I think my long illness was still having lingering effects and I didn’t want to go there again.

There was an open house for Dorothy and Walter Miller’s 50th wedding anniversary that I went to. I liked them both a lot but rarely had a chance to talk to her when he was with her.

One day I took the nursery school class to visit the U.S.F.S. office. I took Jeffrey too. “They really had a good time. Cary Conway talked to them, showed slides, etc. Jim Fields helped hold the fire hose while each one squirted.”

I started taking guitar lessons one night a week in a class that Dick DeRosear was teaching. I borrowed Candy Fields’ guitar.

Bob started being gone during the week every week for probably a month (until a long-term project he was working on would be completed). The previous week he had left on a Tuesday and gotten back on Friday. That night we went to a Rotary Club potluck.

My brother Peter was going to bring their three children up to stay with Alice and Horace the following week for two weeks—in early March. They were moving to Sacramento. He was going to find a house while the kids were in Weaverville. Angenett wouldn’t come until the middle of June because she was taking a training course.

Helen, Herb, Eric and Marilee Woods came over for a visit. Marilee was expecting a baby any minute.

Rebecca made yeast bread from her “Zoom” book (which I got in Monterey) one afternoon. It was beautiful to look at—two loaves braided—and delicious. It took three separate kneadings and risings. 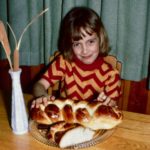 Bob hiked out to the ranch two weeks ago. Everything was in good shape. There were rocks in the road but no slides.

March 19th
I was watching a program on the relationship between the President and Congress.

Bob was gone again for the week.

Florence and Leonard got back from their vacation trip to Death Valley, Arizona, etc. She told me that Mildred Hurd was recovering from a mastectomy. “What a terrible experience for her. I hope she comes out of it all right. “ I was checking myself again more often. “Time Magazine had an encouraging article on cancer recovery.”

We stayed overnight at the ranch on Saturday. It was very cold and cloudy most of the time. Bob burned a big pile of brush and a lot of boards that had been lying around. I spent most of the time in the house Saturday but Sunday did take a walk with Jeff and Clarke. We climbed way up to the top of the ridge. Rebecca went with Bob to the creek and walked back by herself. We collected frog eggs, which soon began hatching in the house in Weaverville.

The weekend before that we had a beautiful day and cleared rocks from the road—had a picnic on the way in. 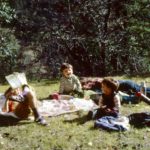 The children had one Friday off as the teachers were having a training session which I attended.

I took Jessica, Cedric and Nicholas Twight on separate days with me to nursery school. Jessica went to school with Rebecca on two different days. The afternoon of Nick’s birthday I had a party for him. Craig Lindsey came although he was really too old but I didn’t know anyone his age to invite and I knew he’d be fine. I had a treasure hunt for them so everyone got a prize. Alice took the children down to Sacramento to join Peter a few days later.