We’d been going out to the ranch on weekends and had stayed overnight several times. On this date the weather was quite warm—yellow iris was blooming in the flower garden in town. Fritillaries were in blossom along the road to the ranch. I’d seen some fawn lilies along the road as well. Bob and Rebecca had counted 25 deer that Saturday when they’d gone for a walk.

I came down with something that created nausea and a rash. May have been three-day measles.

Bob was gone for the week again. I’d signed up for an ecology class taught by the USFS that went from 4:30-8:00 on Friday and then 7 a.m.-6:00 p.m. on Saturday for two weekends in a row. It was designed primarily for teachers. We got rained and hailed on. It had to do with urban environment.

At the night class for nursery school parents the previous week I did a program on doing things outdoors with small children—showed slides too. We had a highway patrolman come and visit the preschool that Tuesday. 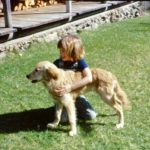 Two weeks ago Rebecca and I had driven to Arcata to pick up my parents’ golden retriever at the airport. She was too much for my dad to deal with in addition to having to take care of my mother and we’d just lost Blacky, our puppy. The children wanted to keep her name, Kinnick-kinnick, the name my mother had given her. She was a beautiful dog. We’d taken her out to the ranch twice. “She has a ball galloping into the bog across from the house.” She stayed outside during the day but was indoors at night.

I was having some times of feeling really down—probably too much stress and not enough sleep, plus being the only parent during the week. The second Saturday of the Ecology class I rode my bike through the fog down the hill and up to the elementary school where the class was being held. Was able to ride it all the way home from there to our driveway without stopping—a steep hill! My section of the class looked into utilities and services in the Weaverville area with emphasis on environment. I was still taking guitar lessons on Wednesdays.

One Tuesday we took the nursery school children out to the B-Bar K Ranch. That afternoon at 3:00 Rebecca and I picked up Jeffrey from school and went to Redding. I bought tennis shoes and boots for both of them and we went to the Pizza Palace for dinner. After that we went to the Civic Auditorium to hear the Dallas Symphony. It was the last program for that season. Jeffrey fell asleep about a third of the way through with his head and stomach on his seat and his feet hooked over the seat in front of him. Rebecca stayed awake through the whole thing.

Bob Grant gave Florence and Leonard some fish and we ate them for dinner Friday night. Bob fried the fish while I fixed the rest of dinner in the hour I had before my class started. Bob took the children with him to go up with Lonny in his plane to take aerial photos Saturday morning.

On the 17th, a Tuesday, I took the children to the library and voted. Then Rebecca went over to Nancy’s and Jeffrey to Florence’s to play with Kent. Clarke napped for once and I did housework. After I picked Jeff up I dropped Kent off at Hurd’s so he could play with Alex. Talked to Mildred for a few minutes. She looked good.

On Sunday Rebecca made some ginger cookies and I used the rest of the dough to make rabbit cookies for the nursery school bake sale that coming Thursday. I also made a cake in the shape of a rabbit’s head. Rebecca made some of her delicious twisted bread. Each sold for $2.00.The boys were getting croupy coughs and Jeffrey had poison oak all over his stomach.

We changed to Daylight Savings Time that Saturday but I messed up and changed it the previous night and was then cross with Bob for being late for us to go to Ginny Breeden’s wedding reception. Ooops. Friday I had subbed at the high school.

That Friday I picked up the children after school and they and I went to Mary Smith Campground at Lewiston Lake. In reading this account I can see I had no idea that people would be arriving at all hours of the night. We were the first car there and I was annoyed when some boys camped right next to us with an empty campground but around 9 p.m. cars started arriving and people were shining flashlights and pounding tent stakes until 1:00 a.m. I’d been concerned about the kids next to us keeping the children awake but I was the one awake until after 1:00. Clarke had sung “Twinkle Twinkle Little Star” until he’d fallen asleep. We left around noon and I stopped at the dam so the children could walk out on it. We saw a big houseboat by the dam and a few days later found out that Candy, Caren and Jim Fields were there with her parents.
The wedding reception was that evening. 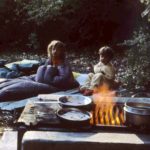 Sunday we went out to the ranch and Bob got most of the rototilling done in the garden while I mowed the lawn. He left Monday again.

I cleaned out the garage, dusting shelves and getting rid of mud dauber nests. I ended up with a lot of things to take to the second-hand store. Exchanged our dining table for one that had more leg room. 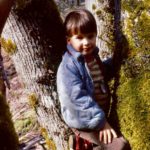 Bob was finishing the last of his project that week but was presenting his final report and the next week was going down for a management training class.

I took Clarke to Redding to get new shoes and we ate lunch at the Shack. Stopped on the way home to see the Hislops for a few minutes. I stayed with them when I went to Shasta J.C. 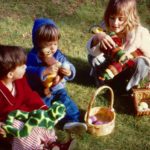 The night before Easter Clarke came out saying, “It’s Easter mommy? It’s Easter?” It was 1:00 a.m. We had an egg hunt and the children got stuffed animals. Nancy, Robin, Noel, Kent and Cheryl came up to bring a basket from Grandmother’s house because we were going out to the ranch instead of to Grandmother’s for a 2nd family hunt.

On the May 9th we met Bob’s plane at the Weaverville airport. Sunday we went out to the ranch and he finished rototilling the garden and added seven sacks of manure to it.

Showed the film “Why Man Creates” to the nursery school parents.

That Sunday Bob had to leave again and on Tuesday I put a second coat of paint on the laundry room—this time with a roller, which was much easier. Took the children to the Brewery for pizza after that.

Two pages of quotes from Dag Hammarskold. I remember really liking his writing for a while.

We moved out to the ranch June 17th. “Children in bed though not asleep. Have the overhead sprinklers going on the roof, a homemade cookie beside me and water for tea getting hot on the stove. Sun is still tipping the pointed mountain at the topmost peak of Eagle Rock.” It had been a cold and windy week. Bob took Rebecca and Jeffrey in the big store truck down to the mouth of Big French Creek to get sand the previous afternoon to put under the pool. At 10 p.m. that night when he and I were setting it up it was really cold. I mentioned in my writing that I was really glad I wasn’t from a city and trying to camp out in that weather. While I was writing though it was much warmer and I was comfortable with the door open and wearing shorts and a tank-top at 8:30 p.m.

That morning I had taken the children and the dog and driven up to the flat in the woods to cut wood. Also took a snack. After 1½ hours I had enough to last a few days. We were virtually out and we’d had a fire in the heating stove the previous day and evening. The children quarreled a lot but otherwise it was very pleasant up there. Bob was staying in town that night to pay bills and do other chores.

The week of June 4th we’d driven to Nehalem to visit my parents. We were going to camp at Yamsi but it was full of cattle and a selective logging operation was going on of the tribal lands around there. We drove out a little road through the pumice and pines until we came to a big meadow with a pond in it. There had been cattle there last year probably so we stayed up late boiling water for the next morning. It was cold. Clarke ended up in my sleeping bag and Bob’s air mattress went flat so he used Clarke’s. I got up early and went for a walk, finding several small ponds that had local birds bathing at their edges. Saw a pair of tree swallows, a finch, chickadees, a golden-mantled ground squirrel, flicker, heard a nuthatch and an olive-sided flycatcher as well as some chipping sparrows. Rebecca later found an old bottle there. That was appropriate; the site was called Bottle Springs. 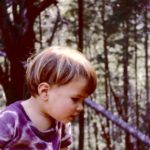 Maybe had to do with wife trading I wasn’t interested in that.), which I’m sure didn’t help either and was keenly aware of his sometimes derogatory remarks about other cultures and about women. One night we looked at slides of Castle Crags that my mother had taken in 1951 and really enjoyed that. Looking at this now I feel for my father. He was probably just being who he had always been and here was his daughter suddenly giving voice to her new outlook on life. And of course he was stressed with caring for our mother. Well, it’s hard to have a lot of wisdom sometimes without additional years of life to guide you.

I called my younger brother, Richard, before we left. Charlotte was graduating from law school and Richard was trying to finish his masters thesis on the Atomic Energy Commission by July.

Rather than camp again, because of the cold, we decided to keep driving. Ate lunch at Castle Rock Park and then dinner in Oakridge. We drove to Salt Creek Falls where we spent about an hour. Rhododendrons were just beginning to bloom but the small Bunchberry Dogwood was in full bloom. We stayed at Crater Lake Motel in Chemult and got permission to use sleeping bags for the children for $11. The next day we ate lunch at Castle Crags State Park picnic area and had the last of Rebecca’s birthday cake (we’d celebrated at the grandparents). That afternoon we walked into Root Creek. What used to be just a ditch grade had been made into a mile long trail since I lived there. On the way in we saw a fox puppy and Rebecca and I took a quick side trip into a pitcher plant bog. When we got to the creek everyone but Bob took their shoes off to wade. Jeff fell in. I had to tie his pants up with my shoelaces so the weight of the water wouldn’t pull them off. We had a great time! We ate dinner in Redding and got home about 9:00.

Had a regular birthday party for Rebecca that Friday. 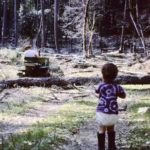