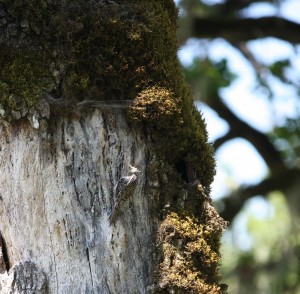 Finding something unusual when you’re hiking takes time and patience. Sometimes something really interesting has happened when I’ve been walking along but, more often than not, the unusual shows up when I’m sitting very still, perhaps taking a short break or eating lunch. And often it takes some time, as if my mind and body have to settle into a state of calm and awareness.

Last week I was sitting on a bench at the Mt. Pisgah Arboretum, eating my lunch while serving my volunteer time watching a parking lot to help prevent car clouting. It was a pleasant day, not too hot or too cold and there was shade from the oak trees leafing out overhead. I noticed two very small birds, Brown Creepers, searching the moss on the trees, moving rapidly from one spot to another and gathering something in their beaks. Using my binoculars I could see the material was lichens, tiny twigs and even cottonwood down. They were flying to the base of an oak snag about 10 feet from me and then disappearing around on the other side. I suspected nest building, so after lunch returned to the car for my camera. The lower four feet of the tree was mostly bark-less. A bird would land at the base of the tree and then ascend to where there was thick moss and disappear into it. Brown Creepers have this pattern of flying to the base of a tree and then working their way up. They never go down. Even with my telephoto lens it was hard to see these little birds, they are so camouflaged. I took a number of pictures, some with no bird at all, two with a creeper on the trunk, one with it entering the hole in the moss, and one with part of an outstretched wing. Speedy little birds!

I also checked on the nest of the flicker, about a quarter of a  mile away, that I had seen during a previous bird identification class,  and she was still there. That means the starlings, so far, have not driven her out. The nest hole opening is a little harder to see now that the leaves on the oaks and maples have grown. 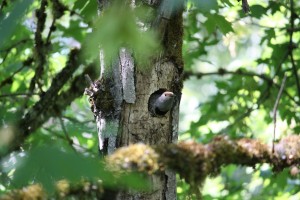 Also last week, I saw online that the Raptor Center was going to be releasing a female Bald Eagle out at Perkins Peninsula, a county park along Fern Ridge Reservoir. Grandchildren were all busy doing something else but I didn’t want to miss it so I went out there, about a 30-minute drive. This eagle had been fighting with another female in the Cottage Grove area but she was being released here where it appeared there were no other eagles nesting. Some people in Cottage Grove had seen the two eagles fighting for a period of at least two hours before they both fell to the earth, still fighting. When Raptor Center personnel got there the other eagle flew away but this one was too badly injured, with deep talon marks in her chest. They thought the other eagle probably had a nest nearby and was also probably larger than this 12-pound bird. Apparently a nesting female will escort a strange male through her territory but will attack another female. After stitches and antibiotics and other care over a two-week period, the badly wounded eagle was ready to be released.

A crowd of about 100 was there to watch. Someone got a photo of her inside the cage just as the door was opened. She had reared backwards with claws extended for protection, then shot forward just above the ground, head low, tail low, then ascending and curving west across the water toward the setting sun before landing in some trees. What a sight! 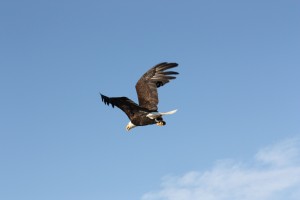