Once school started I didn’t write in my journal until July 14th of 1967. We’d been out at the ranch for a little over two weeks. I don’t remember a whole lot from that preceding time of no journal entries. We were living in the Ohde’s house on Dockery Street during the school year. It was just right for our needs.

I do remember the first time I had to leave Rebecca when she was ill. She was crying. I was crying. Barbara later called the school to have them tell me she had gone to sleep shortly after I left.

It was a difficult year in some ways. I really enjoyed the teaching part of it and most of the children. Fifth grade is a great age—not little children any more, developing a keen sense of humor. I never thought I’d be teaching my nephew but Scott was one of my students! I also remember that, when I was hired, I was told by the principal that I wasn’t getting as much pay as the men because they had families to support. That’s the way it was then.

I’m sure we continued to spend many weekends out at the ranch—watering, mowing lawns, working on the road. So there was very little free time and lots of driving back and forth.

These were the two horses we had at the ranch for a couple of months the summer we were first married. 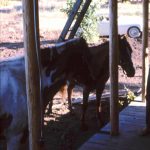 That spring we decided to buy a house in town and purchased a one-bedroom/one-bath house from Bob and Ruby Ocock, who were moving to Paradise. It had a view toward some hills, and was warm and cozy. They had done a lot of the work on it themselves, building rooms with cedar walls, and there was a rock fireplace. We decided that the one bedroom would be for children until we could add more rooms and that our bed would be in the living room. Bob Ocock was a retired teacher and also a former roller-skating champion (with winner’s cups on the shelves in their living room.). Ruby hybridized iris. I don’t remember what she did in addition, but the front yard was filled with lovely iris flowers. She left a multitude of little jars in the house with various labels on them related to her work. So now our trips into town sometimes included unpacking a few things there or doing some watering.

By the end of the year I’d pretty much decided that teaching and raising my own children was probably not something I wanted to do. Those who were able to do that were amazing, in my opinion. My daughter really wanted me in the evening when she was tired, and I was tired, and I’d be fixing dinner with her arms wrapped around my legs. Also I was pregnant with our second child, due in mid-August.

At the ranch, I’d fallen into a routine of up at 5:45 to fix breakfast and see Bob off; wash the dishes, make the bed; usually go for a short walk with Rebecca. I’d read to her four or five times a day. I didn’t get much done in the afternoons. We had a small garden with peas, lettuce, squash, cucumber and tomatoes and Bob had built a fence around it for me, keeping out the deer and our daughter.

Oh, and we had a telephone on the wall! Beige. Bob got it in just before we moved back there. It was a party line, meaning that each household on the line had their own distinctive rings—two long and one short, or whatever. And there was now a toilet upstairs but not yet usable. It was attached though and a pipe buried under the lawn leading toward where the septic tank would go after perc tests. 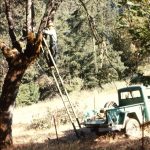 Bob had been working on an article about Big Bar history for the Historical Society off and on all winter and the previous weekend we had gone over to the Pattison Cemetery in Big Bar. There was only one headstone, a plaque and a bunch of mounds with rocks there. Sort of sad. I was typing his work as he got parts of it written.

“Walked up to the garden with Rebecca to eat a few peas fresh off the vine! The grapes along the outer edge of the orchard look as if we might have some this year.”

One day I scraped out a more weed-free path to the washing machine in the cellar and did a couple of batches of laundry. Then Rebecca and I drove down to Waldens’ and visited for about an hour. It seemed important for us both to get some social activities now and then. She got to pet a rabbit and a chicken. From there we went to Big Bar Station for a hamburger, then home for naps for both of us.

The “new” house needed a new refrigerator but we could use the chest freezer that was set into the floor in the kitchen. The washing machine that they left there was a wringer-washer and we would use that. There was also a laundry tray, which I came to appreciate for all of its many possible uses over the years, from a place to wash hair to a place to cool a watermelon.

One day at the ranch I fixed lunch and a thermos of milk to carry over to an oak tree by the fence across from the house. I told Rebecca we were going to have a picnic. She looked in the paper lunch-bag and asked, “Where picnic?”