The afternoon we arrived at Ohanapecosh (Mt. Rainier National Park), we took a 3-mile round trip hike to Silver Falls, then drove to Tipsoo Lake and back. The next day we drove up to Paradise (I’d been there when I worked at Crater Lake and several of us took a road trip). Flowers were quite lovely where we hiked a short distance up a paved path. We took our lunch and ate at the Visitor Center, “ a huge monstrosity that’s completely out of place. It looks like a lady’s straw hat that got sat on. The interior isn’t bad but the exterior is awful. A blob on the landscape.” 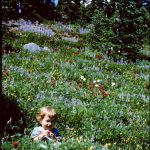 (This picture of Rebecca was taken at Mt. Rainier with its wonderful flowers.)
The day after that was my brother Ben’s day off and we ate lunch at a small lake at Sunrise; then hiked three miles round-trip to Clover Lake. Saw and heard conies and saw several marmots. The last day we followed my sister-n-law (Jan) to a ranch near Packwood where we spent some time looking at Morgan-Arab horses. She drove back home and we continued south on our journey that included a brief stop in Oregon City to see friends of my parents and then on to Gresham, Oregon to stay overnight with Gene Richards, a relative of Bob’s, who raised blackberries commercially. This was such a busy household that we didn’t get much sleep so the next day just traveled a short distance to Newport, where we had a wonderful room with an ocean view and a Franklin stove.

From there we went on down the coast with a stop at Sea Lion Caves. Turned inland at the Ft. Dick turnoff; swam a little in the Smith River, where Rebecca ran on the sand; looked for a motel in Gasquet and ended up at a motel in Crescent City. Continuing south we stopped at Prairie Creek State Park, where I had worked two summers during college. We hiked over to Fern Canyon, four miles. I hadn’t remembered it taking so long and when we reached the beach we tried to find a ride back from other visitors.

The naturalist on duty there gave us half a peanut-butter and jelly sandwich for Rebecca and found a ride for us, although our ride providers stopped to pick up driftwood for a fire so it probably took as long as if we’d walked back. The naturalist had worked for the U.S. Forest Service in the Angeles National Forest for 10 years and knew my brother Peter.

The next day we were back at the ranch and I picked apples and canned two quarts of applesauce. That week I picked more gooseberries and, after cooking and straining them put the juice in the refrigerator, fixing the jelly that night. The generator wasn’t producing enough electricity to keep the light bright so I kept turning the light off and on and using candles.

While Bob was in town the next day, working on the Riordan’s stereo, I showed Rebecca how to run in and out of the sprinkler. By now I also had a key to my classroom and was starting to work on some school things.

Another day I spent several hours at school and took Aunt May and Aunt Nell (Bob’s great aunts) some gooseberry jelly. I also took some to Martha Costa and visited with her for a couple of hours. She gave us some tomatoes, squash, and more, plus giving me some good ideas on canning and freezing.

A last minute discovery was that wild plums were growing near the house at the ranch and I made plum jam.

Toward the end of August we had the Woods out for dinner—Helen and Herb, Sophie (Helen’s sister), Sophie’s niece Rebecca, and Bierget (sp?) and exchange student from Denmark. We made a table by balancing some boards, from the brick and board bookcase, to the card table. I think that bookcase had been in my apartment when I first moved to Weaverville. There was plenty to eat. We gave Bierget the rattles from the rattlesnake.

Speaking of rattlesnakes– “Last night, as I was coming out of the outhouse, I heard the rustle of rattlesnake rattles on the rocks. Bob had left a shovel in the sand pile by the cement mixer so I held the light in one hand and chopped the snake with the other, while also yelling for Bob who was already in bed but who came downstairs.” It was those rattles we gave to our visitor.

August 22nd: I started freezing peaches from our little tree (I remember being impressed that this small tree could produce so many delicious peaches) and made blackberry jelly. By the end of the summer we had 75 pints of frozen peaches. We heard coyotes at 8 a.m. that morning

“Bob and I went to a meeting in Junction City this evening on the dams to be built. We thought people were rude and not sticking to the subject and left around 10. Others felt the speaker was entirely at fault. A local realtor made an idiot of himself. “ After all this time I’m assuming the arguments were for and against the dam and whether or not it would destroy property without sufficient compensation, and/or enrich those who would have property along the reservoir.

“Went to Redding with Nancy and Florence. We shopped for material and patterns at Dickers and I bought some very expensive shoes ($17.00). They fit very well, are nice looking and should last a long time. Guilt pangs though. Also bought some gold corduroy for a jumper for myself and some reversible quilted material for one for Rebecca. We went to the museum at Redding Park for about 15 minutes to see some watercolor paintings one of Florence’s instructors had on exhibit. Poor Florence—that’s the main reason she went down.” I hadn’t remembered that I’d made clothes for myself that I actually wore!

We ate dinner in Big Bar and while we were there Senator Randolph Collier came in and we were introduced. “My general impression was of a big, pompous, slob with a shock of white wavy hair.” Can you be sued for slander after all these years?

(This photo is of Chris and Frank Hadley who were hired to live out at the ranch before we moved from the Bay Area–they did a lot of work and took care of the place and loved it.)

Froze 14 pint of peaches one day and 15 another. Bob took them to put in Florence’s freezer.

So busy–hemming old dresses for school, schoolwork needing to be done.

Florence, Leonard, Nancy, David, Robin, Noel, Kathleen and Freckles (the dog) came out for dinner. David helped Bob unload the generator. (Must have been a new one). Bob had spent the morning leveling the ground and fixing a place for the exhaust. I chipped ice for the ice cream and got dinner on the table. Nancy and Florence cleaned up most of the dishes—we used paper plates, which helped—before they left.

“The generator gives us bright lights. I can run the vacuum cleaner, etc. Very nice for sitting up after dinner when the baby is in bed to do school work! It goes on when you pull the light switch, while before we had to turn it on at the generator. “

“We saw a bear go across the top of the meadow this morning. It stood up to sniff the air. “

Spent a full day in teachers’ meetings and another working in the classroom, mostly on bulletin boards.

My last entry for nearly a year: “After dinner and dishes I picked the rest of the peaches off the tree by the lilac. I canned three pints, made a large baby-food jar of jam from leftovers. The pears I picked are ripening and I froze five boxes of them. Bob has gone to bed. I’ve cleaned up the fruit remains, am writing in this and am also going to bed now.”