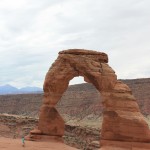 We drove as far as the campground in Arches National Park, turned around and then stopped on the way out at Wolfe Ranch. We’d left the trailer in the parking lot at the entrance as signage recommended.

The Wolfe Ranch was also the entrance to the trail to Delicate Arch. We’d expected a flat trail wandering out into the desert, an easy 3-mile round trip. It turned out to be a trail with some uphill climbs and a fascinating hike, beginning with the ranch house.

John Wesley Wolfe settled here, moving from Ohio, in 1898 with his eldest son Fred.
He was 69 years old with a leg injury from the Civil War and looking for a drier climate. His 100 acres had fresh water and enough grass for a few cattle, eventually growing to a large herd. The brackish water in the stream (Salt Wash) was enough for irrigation and the cattle and they used water from a  nearby spring for drinking. We saw some small fish in the creek. In 1906 Wolfe’s daughter and her husband and two young children arrived. 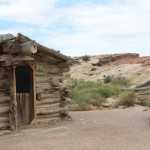 “Flora demanded they build a new cabin with a wooden floor and real windows.” The cabin that Wolfe built remains today. It is made of cottonwood logs and is 17 X 15ft. “He also constructed a root cellar, irrigation dams, and a corral. All six family members lived and slept under the distinctive thatch-and-clay roof for just two years….” At that time his daughter and family moved to Moab so the children could attend school. In 1910 the whole family returned to Ohio where he died at age 84. (This information is from a National Park Service website) 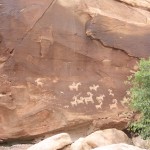 I’ve always wanted to see petroglyphs (not just on television or in books or magazines) and not far from the old house is a bluff where there are petroglyphs on a rock face! What a treat! I find it deeply moving that the need for expressing ourselves in art goes back to so long ago, as evidenced in caves in Europe. Utes camped near the Wolfe Ranch and traded handmade blankets for garden produce and meat. The fact that some of the figures are shown on horseback means that the artwork was done “after the mid-1600s when the native people acquired horses.” Other figures include bighorn sheep and dogs.

From the petroglyphs we returned to the main trail and began our hike. We were fortunate that the sky was overcast because otherwise the heat would have been more difficult for us. We’d had water before we left the car but figured three miles didn’t require water in hand even though rangers posted at the trailhead strongly suggested it.

The trail started at 4,300 feet elevation and climbed 480 feet. It wound over some small rises and then went fairly steeply up an expanse of sloping smooth sandstone (slickrock), a little like the glacier polished granite of the Sierras but with the red color of the desert. Here and there were small, rounded 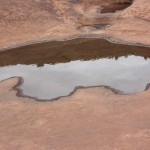 potholes holding water from the summer thunderstorms. As we were going up the rock others were coming down, but there was nothing except sky visible beyond the top of the rock—as if they’d just disembarked from a space ship. Soon younger people passed us on their pilgrimage to the top. Beyond that rounded summit the trail continued as did the small cairns we had been following. The other hikers were more scarce now. I was a bit ahead of my spouse and stopped now and then to snap a picture. 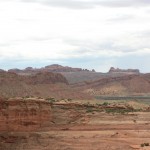 Finally the trail was a three-foot wide path that had been blasted out of the hillside, with a cliff above and one below. One more turn and there was Delicate Arch—and other hikers.

This view was worth every bit of the hike, the heat and the humidity. The surprise to me was that 80-foot tall Delicate Arch stands on an outcropping, solitary, with no support from either side. It’s just there. And someday it won’t be there as wind and weather wear it down. To 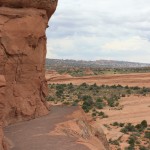 m and I didn’t climb over the edge and go down to stand under the arch and pose as many were doing but were content to sit and enjoy. We also enjoyed a little chipmunk that had obviously learned how to get free, although maybe lacking in nourishment, meals. It wasn’t just Delicate Arch that intrigued me about this area though.

As I looked down into the canyon below that path I thought about the Native Americans who used to roam these desert wilds and how well they had to know the land in order to survive. How they would know each spring and each pothole that might catch water from the sto 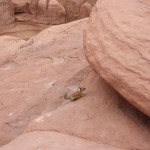 rms. How they would know the habits of the wildlife and where to find edible plants. How they would know the secrets passed down from one generation to the next, the holiness and the spirits of this place. And here we were, along with all the other tourists, coming to view the wonder of an arch, awed as we clicked our cameras, but then going on our way to photograph new scenes in the coming days. John Wolfe, who lived here many years, had seen sunrises and sunsets; had built a cabin from local wood; had learned what garden produce would grow in these soils and how to use the rare water sources; had watched the night sky and traded with the local Native Americans. No doubt some of this place had become a part of him, yet even Wolfe was just passing through