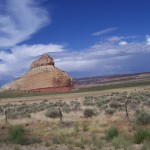 Before reaching Bluff (previous blog post), Utah, while still in Arizona, we passed some beautiful red-rock bluffs and the Anasazi Inn. We were at 6,000 feet elevation. Got gas an more iced tea in Kayenta. a Navajo Nation community near Monument Valley. Here were houses with red, blue and green roofs. “Kayenta is regarded as a political sub-division of the Navajo Nation.“ (Wikipedia) Hwy 163 took us through Monument Valley, a tribal park with lovely red-rock formations—spires, swirls. Then we were in Utah.

Mexican Hat is a little community on the San Juan River where narrow buildings (an inn) are perched on a narrow shelf above the muddy river. There is a steep pitch (10%) down to the bridge. Mexican Hat is named for a rock formation, that we did not see, where
a large, almost flat stone, about 60 feet in diameter, is perched upon a smaller one up on top of a hill of red rock. After we left this area we found a place to pull off and look at a map and also take more photos back toward the red-rock formations. Sometimes I just stuck the camera o

ut the window and hoped for the best.

Our next town was Blanding, a nice little village where the visitor center has Tesla plug-ins! Went into the trailer to fix peanut butter sandwiches and carrots for lunch. It is near Blanding that some local ORV drivers recently challenged the closing of an old road to motorized vehicles. The Bureau of Land Management (BLM) is trying to protect numerous archaeological sites while some local citizens insist it is their right to drive in this area.

From Blanding we climbed higher and were soon in junipers and sagebrush. I enjoyed reading some of the names as we travelled and wondered where they came from: Devil’s Canyon Campround was an obvious one because it was in the Devils Canyon National Forest. Devil’s Canyon is dry most of the year but when flash floods occur it roars with muddy water. It was named by early settlers who had great difficulty crossing it. And to my delight we were once again seeing ponderosa pines. Bull Hollow Raceway, near Monticello, is one of Utah’s best motocross tracks and privately owned and operated. We had a great view of the mountain to our left where we had previously seen smoke from a forest fire.

Twenty-two miles from Moab we entered the La Sal Mountains National Forest. And crossed into another time zone. 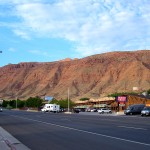 a town of mountain-bike riders, river rafters, and extreme sports enthusiasts was originally settled by Mormon missionaries in 1855, slightly north of the current town site, where they built a “stone fort, a stockade and a log corral for their livestock and immediately began to plant crops”. The local Ute tribe was friendly at first but before long attacked the fort and set fire to hay and corn crops. The mission was abandoned and “permanent settlers did not return to the region until 1877”. The new settlement was called “Moab”, or “land beyond the Jordan”, a Biblical land where Semitic relatives of the Hebrews dwelled.” http://historytogo.utah.gov/utah_chapters/pioneers_and_cowboys/thefoundingandnamingofmoab.html                 http://historytogo.utah.gov/places/moab.html

In the 1950s the economy changed from a community of farming, ranching and fruit growing to one supported by uranium and then potash.

We arrived at Canyon RV Park in Moab around 9 p.m. The  RV park is basically downtown and it was packed. Right next to us (and I mean right next to us—I could reach out from our table and touch their tent) was a middle-aged couple with a yellow Honda motorcycle and a little motorcycle tent trailer. Tom found out that they belonged to a Christian motorcycle group. The mostly young people across the narrow road from us were part of a group with a guide on a See America trip. They had done a river-rafting trip that day. One man, who seemed a little older than the rest, stayed in camp while the others went to take a hike at Arches National Park and it was he who gave Tom this information.

I felt the need for some alcohol and walked down to the store next to the RV park entrance and bought a bag of ice and a can of Sprite. Tom fixed highballs with the whiskey his friend Marty had given us in Huntington Beach. Certainly took the edge off my “surrounded by crowds” stress! I fixed a big salad for dinner and topped it with tomatoes and tuna. On the opposite side of us a young child was screeching.

It was hot again that night but I slept a little better than the night before. I got up early and walked a couple of blocks to find a trail the office clerk had told me about the night before. When I asked about a place to walk she started suggesting places to shop and I shook my head. Not what I had in mind. She understood and said if I needed a place to be around fewer people and buildings there was a trail just a few blocks down the street, a paved bike path along a small creek. The town of Moab, population 5,000 and elevation a little over 4,025 feet, is surrounded by red rock bluffs, an attractive setting, particularly in the evening and early morning when the slanting sunlight highlights the colors.

I walked about a mile up the creek, which still had a little water in it. The grass along the way was brown and dry but there were trees. Signs sa 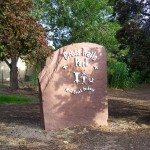 id they were eradicating Russian Olive (an invasive species) and Tamarisk (also an invasive species that depletes groundwater). Some very large cottonwoods grew on both sides of the stream as well as mulberry, which had dropped berries on the pathway. The trail went past some houses that were fenced, and past the high school. Beyond the high school were red rock bluffs that apparently follow this canyon. When we had arrived at the campground the night before we could hear a band playing marching music and it must have been the high school marching band practicing. That was something that was actually kind of nice once I realized it wasn’t coming from an adjacent campsit 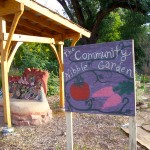 e! The high school had a “Nibble” garden along the trail where you can eat a bit if you so desire. A nice touch.

Tom fixed scrambled eggs for breakfast and we had that, a slice of bread and orange juice accompanied by the coffee I’d purchased for both of us at the store on my way back from my hike. Well fortified, we left Moab and decided we’d go to Arches National Park and then see whether we had time for Canyonlands.