From Yamsi campground we drove to Chemult and on up Highway 97. We stopped and went a few feet into a lava tube cave—found a big chunk of ice in there formed during the winter from water dripping down. Temperature in the cave was 40 degrees. We ate lunch just outside of Sisters at a picnic area along a river where red- winged blackbirds came down for crumbs and we were cooled off by sprinklers on the way to and from the table. 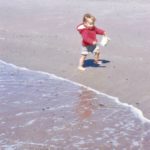 We ate dinner in Salem and called my parents from there. Arrived in Nehalem around 8:00 p.m. My mother wept at our arrival. Her bed was in the bay window area of the dining room. I knew more or less what to expect but it was still difficult seeing her with the damage from the stroke. Her right leg was paralyzed and right arm kind of frozen across her chest. The worst part for her I think was inability to communicate although she apparently improved some just in the time we were there—new faces, new urge to speak. She could read a word or two out loud and was able to direct me to a box that had a list of words and songs I used when I was 2 years old. She wanted desperately to help and rinsed the lunch dishes one day when I washed them, and folded some clothes. I did most of the cooking while we were there and Bob and my dad most of the dishes. I managed to clean the refrigerator, go over the walls and floor of the upstairs bathroom with a wet sponge, polish a favorite silver pitcher before we left. I didn’t have as much time to do all I’d have liked to what with cooking, laundry, etc. 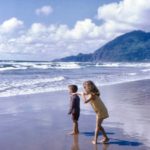 We went to the beach for an hour or so every afternoon after Clarke’s nap. Rebecca and Jeffrey had a good time at the beach; Jeffrey loved the waves. Clarke liked the water the first day but then decided the sand was more fun and more predictable. They enjoyed sliding down the sand dunes, Clarke saying “wheeee” all the way down. One morning I took the children up the road a little way where we talked to a neighbor and picked a few salmon berries. Bob worked on my dad’s stair-casing a little. My dad mowed the lawn, which was about a foot deep. It was a good visit under the circumstances and this time my mother wasn’t in the pain she’d been in before, which reduced the tension between them. Both got really frustrated with the communication though. On Monday, after I changed and remade the beds we left. 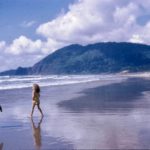 We returned the same way we’d gone, pausing in Tillamook to view the cheese-making process, where we bought yogurt for our lunch and cheese for Gilda and ourselves. We ate lunch at Castle Rock campground; a U.S.F.S. crew was mowing the tall grass. There was a large pump there for drawing drinking water, which the children enjoyed. 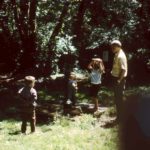 We were going to camp at one of the lakes in the La Pine area (Paulina, East and Little Crater Lakes) but they were quite crowded…lots of boaters. We ended up eating dinner at Little Crater Campground in the picnic area. The wind was blowing and we were chilly but some hot food helped. There was a pump there too. We then drove on over the top of a mountain, which still had snow patches extending into the road. Finally stopped at a place called China Hat—a U.S.F.S. guard station (empty) and campground (empty). We unloaded the car, blew up air mattresses and were in bed around 9:30. “I stayed awake a long time listening for children (who slept soundly), listening to the wind, watching the stars, and watching the pine trees move in the wind.”

After breakfast we drove back past the lakes, through miles of pine-covered, pumice-covered hills and stopped to look at an obsidian flow—ate some snow still on its surface. Apparently that whole area was one volcano and the two lakes lie in what was its interior. We drove past Klamath Lake and the children were pleased to have seen three trains in a row. We ate lunch at the Williamson River State Park. 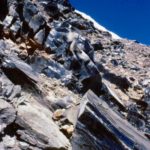 And suddenly it was July 4th.

“I’m sitting in the old wicker rocker (which the children are methodically picking apart- at the ranch. It’s a little after 9 pm. Still light enough to see outside. Clarke is asleep. Rebecca and Jeffrey are supposed to be but aren’t. Bob went down to the creek in the VW and they left their blankets in it so are probably listening for his return. Also it’s very hot upstairs.”

The day after we got back from Nehalem I did six batches of laundry and Bob flew to Garberville. That was a Wednesday and he wouldn’t get back until Friday. Friday I went to a Tupperware party at McClurg’s and Jane Van Duyn and Linda Ohde watched the children. We stayed in town Saturday and Bob moved the washing machine, etc. out to the ranch Saturday night. Sunday we went out and he went out with Hal Miller to dig a septic tank hole and leach line. We arrived just as they were finishing lunch. While we were eating Bob brought over a fat rattlesnake, minus its head, which he’d cut off. It was about 2 ½ feet long. It had rattled at him from the brush pile in the orchard. I was pretty sure that all our extra watering was bringing them in because the watering made better habitat for mice and other creatures.

The week before Bob had put up the pool, hauling sand from near the river to put it on. Clarke loved the pool He floated easily with someone holding his arms or with one hand under his stomach

One day I mowed the grass in the orchard, wanting to get it low to discourage hidden rattlesnakes and ground squirrels. Ran it with not enough oil and it started smoking. We took it in for repairs. I mowed the grass around the house with a push mower and it took me three hours. Was so thankful for the pool to cool off in several times.

We went to the fireworks at Lowden Park. I’d seen fireworks only once before and the children never. We went too early and the kids got tired waiting but they were really nice. We were on the backside of the field opposite where the audience was supposed to be so were almost directly under some of them. Rebecca said she liked the ones that were furthest away best. Jeffrey seemed quietly impressed and Clarke was rather upset, jumping with each bang and shaking some.

On the morning of the 4th we watched the parade from the balcony at the phone company. Enjoyed seeing and hearing the community band that Dick DeRosear had organized. Clarke was impressed by all the “wheels”. He couldn’t say “truck”. And the “cows”—horses. We could see the Ryans and Hurds, Adrians and Florence and Leonard right across the street in front of Ryan’s store.

On the 6th Bob got up at 4:30 and was going to let me sleep in but I got up and fixed some cantaloupe to go with his dry cereal. Was going to go back to bed but stayed up to have some time to myself and write in my journal and have a cup of coffee, expecting any minute to hear the thump thump of feet on the stairs.

“ The sun is just hitting the trees across from the house. “ The day before a U.S.F.S. truck came in carrying two Hondas in the back and drove up the hill. A couple of hours later they came back, one Honda still in the truck. They’d gotten up to the top of the hill and hadn’t been able to start that one. We went into town to stay overnight as Rebecca had piano lessons. I took the children to the pool. Rebecca was nearly back to where she’d been at the end of last summer and Jeffrey almost to where he’d been. Clarke was so buoyant I thought he could swim if given lessons.

“Really wish we could just stay away from town for the summer. It is so beautiful out here.”

I was reading “Mid-Century” by Dos Passos and really enjoying it. It was the first of his books I’d read and I noticed he had written others.

On the 8th we left the ranch around 9 and after a stop at the house went down to Varney’s for a snack. We hadn’t been there in a long time. Ran into Linda Lindsey who said it was Scot’s 2nd birthday. Later I left the children with Florence while I went for a doctor’s appointment. She took us down for a frosty. I visited with Aunt Nell a few minutes and wrote that I needed to do that more often. She was nearly 88. Went home and had crackers and cheese with the children and then took them to the pool lessons for pre-schoolers. Connie Martin was there so she gave Rebecca some too. Clarke was his usual relaxed self. They tossed ping pong balls in the pool for the little ones to reach and grab and Clarke was so tired he had one thumb in his mouth and was grabbing two balls with his other hand. Came home and called Bob to tell him dinner was ready (had put fish in the oven before we left). He worked at the office until after midnight. 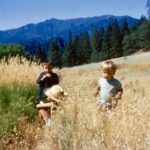 The next day, after numerous errands, we went over to see Florence who gave us lettuce, peas and carrots. Back to the house to eat lunch and called Bob to tell him there was lunch there for him. Then we went out to the ranch and he went to Garberville. We used the pool and then I drained and cleaned it– filled it before turning the water off when I went to bed about 11:30.

I was trying to write some stories and sending them off to various magazines.

Bob brought Tigger (cat) out and the ground squirrels really complained. Bob had stayed up until 3 a.m. working in Garberville the night before and looked really
tired.

Sunday evening, he drove into Weaverville so he could leave Monday at 6 a.m. to fly to Victorville. He spent most of Sunday working on the septic tank, getting it ready to pour the slab.

Clarke managed to pull the small log (which Bob had his pipe vise attached to) on the porch off onto himself. He was lucky to just get a scrape. It was heavy.

Candy called and we talked for about 20 minutes. They were planning to come out Sunday so Jim could help Bob. They had gone on a backpack trip with Carin the previous weekend into Horseshoe Lake.

My eldest brother got married again. My youngest brother and his wife were spending some time with our parents. Charlotte was going to summer school and Richard was a T.A. and also taking some classes—both in Seattle. They belonged to a rock-climbing group.

“Jeffrey read two short pages to me this afternoon. He’s doing very well—just needs practice. He asked to read. He was so pleased with himself this evening. I asked him if he’d look at the Mother Goose Book with Clarke (who was very fussy) while I finished the dishes. He did so and recited many of the rhymes he knew out loud. He’s never done that before and was pleased with his “reading”. “