Substituted last Friday for Fred Horschel at the high school. Thursday morning had put Florence’s painting in the window of the Thrift Shop. Blanche H. even contributed some dried apple dolls.

Was supposed to sub on Monday but the high school called and said the Senior Sneak had been cancelled. Subbed on Tuesday for Dave Ohde. We both got up early because Bob had some work to do at the office before his boss got there. Then in the afternoon he flew to Garberville and then to Victorville. I went to Rebecca’s ballet recital Tuesday night, leaving the boys with Jan Goodyear. “Rebecca has really improved a lot—is developing a natural grace. Marilyn really has done well with the youngsters.” 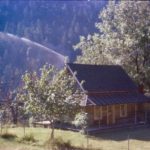 On the 25th, after substituting in the morning, I drove to Redding and attended part of a meeting on Roadless Areas being considered by the USFS. Gave a brief talk recommending that Castle Crags and Mt. Shasta area be included. Almost got hit by a long log on a Redding bound truck on my way home.

We were out at the ranch on the 29th and Bob said if I’d get Clarke dressed he’d watch the children for a while if I wanted to go for a walk. “I thought it too warm to go far but then walked clear up to the Upper Ranch in 1 ½ hours—really surprised myself and had a good time also. The first part of the trail is dark and damp like the redwoods—ferns, lush growth. Then one goes through pines and stretches of live oak, very dry. There was a trickle of water on one small gully and some in a spring, almost a mile from the ranch, which trickles out from under a stump. Here someone had made a little clay dam with the initials D.P. 5-27-72 in the clay.”

“The entrance of the trail into the Upper Meadow is quite dramatic—you burst out of the forest into a lovely, fan-shaped green meadow (which will soon be brown) with a little cabin at its upper end. I saw what looked like a white towel on the porch and was going to go look but a man stepped out onto the porch. He saw me and went back inside. I decided not to go up and talk. If he was ok then he deserved his privacy. If not then I really didn’t want to test his friendliness. I really scooted coming down. Was afraid Bob would be worrying—I’d told him I’d be back in 1½ hours. Got back about 1:15. Had been gone two hours and 15 minutes—not bad for that mileage! Also got some blisters. That is really a very nice hike. Would like to take the children and stay overnight up there sometime. “

“Fixed lunch for the children (Bob fixed his own), changed Clarke’s pants, washed the dishes, put Clarke down, washed Rebecca and Jeffrey’s hair and went over the kitchen area with a damp sponge. “

The next weekend we didn’t get out to the ranch until about 4. Ate lunch down at the creek on Sunday and the kids caught water skeeters (striders). We found a couple of salamanders that had gills just behind their heads. Water was very cold. Grosbeaks called all day. 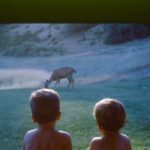 June 1st—was watching TV. “President Nixon reported on his trip to Moscow. I really don’t see that a whole lot has been accomplished—the disarmament agreements don’t get rid of the weapons and bombs that are already built.”

Took the children out to Little French Creek on Monday after Clarke’s nap. We stayed about half an hour. On the way back up to the house we met a boy about 16 years old with a pack and rifle. He said he’d been at the Upper Ranch and some friend of his was staying up there the rest of the week. He was from Willow Creek and said he’d been going up there since he was eight. Saw a big black bear on our way home to Weaverville on the other side of the creek, across from the clay slide. Children enjoyed it.

Wednesday Warm Mt. School was having a meeting out at the lake for lunch and boating but I didn’t want Jeffrey to go without me and didn’t feel like getting a sitter for Clarke or staying out there all day. I suggested to Jeff that we go to Rush Creek for our own picnic instead and he was so agreeable about it. “A very adaptable boy and generally sweet tempered. “ Did some errands downtown, went to Varney’s. Back home to fix lunch and were out at Rush Creek by 11:30. Clarke spent most of his time on the edge of the water. Jeffrey chased a frog and got thoroughly wet. We were home by one and had Clarke down for a nap. Picked up Rebecca from piano lessons at 3:00.

On Tuesday I spent a couple of hours selling tickets for the Canyon Creek Trail clean-up raffle. Sold 44 tickets.

Substituted for Dave Ohde who took his physics class to the Bay Area. After school took the children to the Rush Creek Campground for an hour. Was scheduled to sub the next day too.

June 3rd we were out at the ranch again. Bob hooked up the new gas tank and we were able to read by lamplight! I was really getting tired of cleaning up mouse droppings every time we went out there. “makes me feel as if everything is filthy.”

Candy and Jim Fields and Carin arrived around noon. We ate lunch and tried putting the two babies down for naps. After two hours we gave up and went down to the creek for an hour. Carin loved being swished up to her neck in that cold water by her parents. Went back to the house and fixed dinner. We tried putting Rebecca and Jeffrey out on the porch, the babies on a towel on the floor and grown-ups at the table. Carin and Clarke ended up eating mostly popsicles. Jim played with the children a lot, which they enjoyed, and it gave us time to do some clean up. Clarke played in the ashes dumped across the road so Bob took him upstairs and gave him a shower and clean clothes. 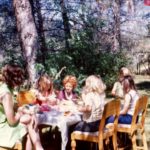 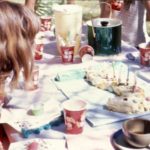 And suddenly my journal jumps to June 21st. During this gap there was Rebecca’s 7th birthday and we took a trip to Nehalem to see my parents. Our trip started on the 14th with a stop for gas at Ammirati’s in Castella. We saw Joe Ammirati and also Audrey McLeod. Audrey and her husband Whitey lived across the river when my family lived at Castle Crags. 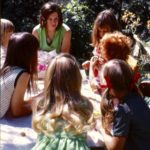 We drove as far as Chemult and then began looking for a campground. We didn’t go the right way and finally, out of desperation stopped for salami sandwiches along a murky river, which ran through many cow pastures. We ate while dancing around slapping mosquitoes. We had a scare there as Clarke disappeared for a minute. I thought Rebecca or Bob was watching him. Bob thought Rebecca was watching him. I though he might have gone to the river just a few feet away but fortunately he was on a table nearby. We finally went up the correct road and ended up at a place called Yamsi.

It was a pretty campsite and I wished we’d gotten there sooner so the children could have played. As it was, by the time everyone was in bed (Clarke in the back seat of the car, Jeffery in the front, Bob, Rebecca and I outside in sleeping bags) and we’d boiled some water it was 10 o’clock.

About 1:00 a.m. Bob and I were awakened by a rifle shot. Someone was spotlighting deer and fired away about 100 yards up the road from where we were sleeping. The spotlight swept over us a few times. Then they drove on. 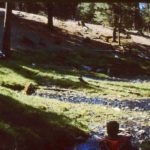 The camp was at the head of the Williamson River where about seven large springs bubbled up out of the gravel—a small, dry hillside above them. It was a pumice-covered area otherwise—covered with lodgepole pines. There was a ranger station across the river but we had the campground to ourselves. No tables or stoves but we used our table and Florence and Leonard’s prima stoves. There had been cattle through the area, which is why we boiled the water. There was a ranch across the river (which spread out into almost a small lake below our campground) and an occupied camp on the other side of that next to the grazing cattle. An amazing amount of water comes out of those springs. We had bacon and pancakes for breakfast, milk for everyone else and coffee for me, and cooked apricots.

A few years later I discovered a book called “Yamsi-A Year in the Life of a Wilderness Ranch” by Dayton O. Hyde. This was the ranch along the river. It is a wonderful book and I’d like to read it again. Dayton Hyde lived in Michigan and at age 13 caught a train to Oregon where he wanted to live on the Yamsi Ranch, a 6,000 acre ranch owned by his uncle. I just looked up some information about Hyde and discovered that when he was older he wanted to establish a place for wild horses so they wouldn’t have to be confined to cramped corrals. He went to South Dakota and helped establish a sanctuary for wild horses there. After that most of his time was spent in S. Dakota but he also continued to spend time at Yamsi. Hyde died at Yamsi in 2018 at the age of 93. He has written a number of books including one about raising a Sand Hill Crane, called “Sandy”.