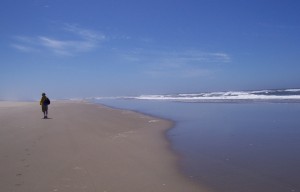 Wisps of smoke curled up from the
blackened remains of a campfire,
one piece of wood, unburned at the far end,
still hot and smoldering above warm charcoal.
Not 15 feet away the McKenzie River flowed,
icy cold and easily accessible.
I used a zip-lock plastic bag from my daypack
to carry water, going down the slope and
placing the bottom of the bag on the gravel streambed,
filling it just a little to provide weight,
then letting the current do the rest.
My foot slipped on an algae-covered rock,
wetting sock and pant cuff.
It was satisfying to hear the hiss and
see the steam as water met hot wood.
Tom placed rocks on the coals to help
keep the wind from carrying sparks.
We scraped more duff aside with our boots,
and, finally satisfied, continued our hike.

The McKenzie,
formed from melting snows in the Cascades,
runs into the Willamette,
which runs into the Columbia,
which empties into the ocean.
Scientists are saying that
ocean waters are 30 percent more acidic
than they were 200 years ago.
Oysters dying along the northern Oregon Coast
were one of the first warnings.
Jellyfish are filling the nets of salmon fishermen.
Sometimes crab pots contain only dead crabs.
The concentration of calcium carbonate,
needed for shells and skeletons,
is lessening as carbon dioxide, absorbed by the oceans,
is turning the seas acidic.
Each creature provides food
for the next creature up the food chain
and all sea life is threatened.