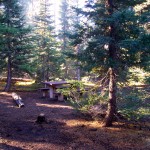 Crater Lake National Park and bicycle riding usually don’t occur in the same thought but my husband and I have just returned from mixing the two. We’ve been gone for nine days and are now dealing with the re-entry—cleaning out our little Casita trailer, laundry (he likes to do laundry, thank goodness!), washing dishes, getting rehydrated and caught up on rest—that will take a few days.

Crater Lake is Oregon’s only National Park (Oregon Caves being a National Monument) and is a volcano containing the deepest lake (1,949 ft.) in the U.S. and second deepest in N. America. When Mt. Mazama erupted 7,700 years ago, it collapsed into the interior after vast amounts of lava were expelled,leaving a crater (actually a caldera) six miles across that filled with rain and melting snow waters over the ensuing centuries.This was where I had two wonderful summers in 1961 and 1962 working as a seasonal ranger-naturalist.

I’ve been a member of Friends of Crater Lake for a number of years and receive their newsletters—a good way to keep up on events at the park. Last year we volunteered to help staff an aid station for Ride the Rim, a Saturday when the Rim Drive is closed to automobiles from about 8:00 a.m. to 6:00 p.m. Visitors may still drive from park hea 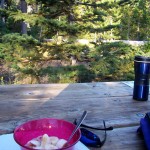 dquarters to Rim Village and out to the north but about 24 miles of the 33-mile drive are for foot and bicycle travel only. The event is sponsored by the Klamath Falls Chamber of Commerce and Friends of Crater Lake, with assistance from the park service. The Chamber works hard to get donations from different sponsors, with Clif Bars being one of the major participants. Also at each of the five aid stations are water, bananas and some oranges. This year some basic bike tools were available to use as were some first-aid materials such as bandages. 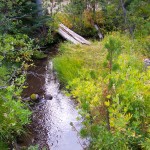 the first Saturday, while the other rode, and then reverse the process the next Saturday, the 16th and the 24th.

Last year, trolleys that usually take groups of people around the scenic drive were used to bring people and bikes up the hill from park headquarters, the one section of the highway still open to traffic and all uphill. That was a slow, cumbersome process so this time they had no bike hauling, just people, and used buses. If a biker needed to leave his or her bike, there was a corral at each end of this stretch of highway with valet parking. Raffle-type tickets were given to those individuals so the numbers could be matched when they came back to claim their bicycle. Most decided to use the bus service but some opted to bike up (or down) the hill.

We arrived at Lost Creek Campground, a very small (and dusty) camp that is reserved for tents only. Water is available and there are flush toilets but no showers. No lights in the restroom but maybe there are supposed to be. Solar panels provide enough electricity for a paper-towel dispenser, which seemed funny in this remote spot. Small trailers (no toilets) were allowed for volunteers this year, just for the ride weekend. Forest cover here is mostly lodgepole pine and some fir. Many lodgepoles seem to be dying and the park service has used some of the cut trees for firewood.

Behind our site a sign posted on a pine said “NO FISHING” and, in smaller letters, somethi 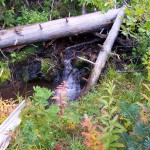 ng about protecting Bulltrout. I remarked, out loud, “Where would anyone fish? There’s no water,” then realized, to my delight, that the small stream of Lost Creek ran not 25 feet from our table. The site was equipped with a heavy, metal bear-proof container to store food and a fire ring.

We could see the backside of Mt. Scott from here, rising above us. The moon was huge as it rose and I’m sure would have been reflecting beautifully on the lake. Two members of Friends of Crater Lake came by to register those of us (five I think) who would be volunteering the next day (and included me for the following weekend) so that all could go directly to their posts without having to check in at headquarters. Tom got his bright yellow and orange vest that read Friends of Crater Lake on the back and I could use it when my turn came.

We set the alarm for 6:00 a.m. but got up at 5:30 and ate a quick breakfast. Tom removed my bike from the trailer and put it on the rack on the back of the car. I’d made lunches after we arrived at the campsite the day before and we were soon on our way to the Rim. This was my day to ride.