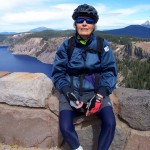 u ever going to ride that bike?” a man’s voice asked. Well, yes, off and on. Bundled in layers again
st the cold, I started up the hill from the North Junction to Rim Drive, along with numerous other bike riders. Within a short distance I realized that something was wrong–probably with me but also with my bicycle. I couldn’t get it to go into the three lowest gears. After half a mile of struggle I was off the bike and gasping for air. A couple of men stopped to see whether they could help but they said I needed to find some tools. So back to the start I we 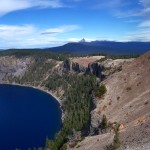 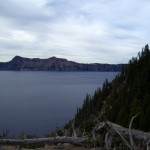 haken. I’d been a bit nervous about trying this at all but to have to turn back so soon was very discouraging.

Back at the aid station another bicyclist came to my rescue with a cluster of small screwdrivers and was able to make it so I could use those lowest gears although requiring a huge reach for my right thumb. I started back up the hill and so 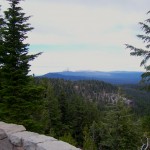 on stopped to walk, pushing my bike until I reached the top. The altitude was a huge factor and, although I’m sure age made a difference, there were others close to my age moving slowly along, pedal by pedal, as well as those who were much younger working their way past me.

After regaining my breath I headed down the hill. That was fun! At the bottom were a couple more slight hills and then another downhill spurt until I came to the Cleetwood Cove aid station. This was a good spot to stop, get a snack, and use the porta-potty. I walked around a bit thinking about whether I should just go back and return to the start. But I really didn’t want to go back up that hill. Too much like admitting defeat, plus I knew I could go a little further. So back t 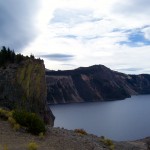 o pumping….and walking. I stopped at several places to look at the view, which was pretty astonishing. There is something to be said for struggling mentally and physically along the edge of a not-quite-extinct volcano that holds a deep blue lake within colorful lava walls, clouds moving acro 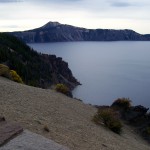 At one overlook I asked a woman whether she would take my picture for m
e and she gladly obliged. She told me that she and her husband were taking it kind of easy although they were going to turn around at park headquarters and come all the way back the same way. Taking it easy? One thing I discovered on these two Saturdays was that many people are BIKERS! Not just riding occasionally or riding on bike paths but serious bikers. They are in biking shape. They belong to biking groups, participate in many events, and ride at elevations of 5,000 feet fairly often. The children are in shape because active children ARE in shape. Sigh.

There was a lot of camaraderie though and when people pedaled past my plodding figure many asked whether I was ok, did I need anything, or gave me encouraging words. Everyone seemed to be having a good time.

Then I started up the hill toward Mt. Scott. This is a very long hill—probably three miles—a long push. At the last turnout, before this hill the wind was blowing in strong gusts. I’m kind of a light-weight and when I was riding my bike was nearly pushed into someone else several times by the wind. Later I found out that others were having the same difficulty. 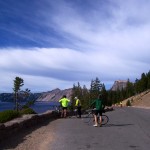 About a quarter of a mile from the Mt. Scott aid station I stopped to eat lunch, sitting on the stone wall that marked the edge of the road. A woman, in her mid-sixties, chatted with me for a few minutes andgave me a small cooky that had electrolytes in it. She said it was her last one but wanted me to have it. She also told me to really be aware of my body and said that if I hit the wall it would be abrupt, wise advice I think. A few minutes later I reached the aid station and decided this was a good place to turn back. I’d ridden/walked 10.9 miles and my legs just didn’t have any energy left. One of the Friends of Crater Lake at this stop I’d met the night before at our camp and I told him I was going to head back to Cleetwood, that I knew I could make it that far. I might have been able to make it all the way to park headquarters since I was nearly half-way there but I knew for sure what was behind me and not what was ah 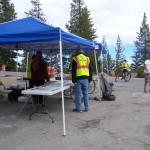 ead, so turned back.

That long, downhill ride was pretty wonderful!! Then there were a couple of little hills and I was at Cleetwood. Here I rested and talked to Sally (82) and Chuck (91) Wells, long-time Friends of Crater Lake. They have led a fascinating life and were great fun to get to know. They even knew L 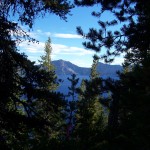 ynn Jungworth, from Hayfork, California, having talked to her in the past about a project they had worked on in Klamath Falls. Also at this stop was a 16-year old exchange student from Denmark—a bright and interesting girl. I gave a young couple, who were heading back to the North Junction, a note to give to Tom telling him where I was so he could pick me up after six when the road opened. They assured me they would get it to him and did so.

After a couple of hours a ranger (female!) came to pick up the exchange student because her host fat 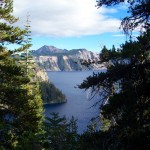 her had come to get her and she offered me a ride back to the aid station as well where Tom was just finishing up. By then it was six o’clock. We drove back to our campsite, ate dinner—homemade soup I’d brought, bread and wine–and collapsed. I’d ridden/walked a total of 19 miles (top elevation of about 7500 ft.) counting the ½ mile up and back when I needed gears adjusted. The whole process was an eye opener for me. I’m not used to giving up on anything but guess it’s also important to face the reality of physical limitations. This was a beautiful place to come to that realization.