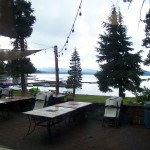 Wednesday: VERY cold last night and this morning. We drove up the road to Diamond Lake Lodge for breakfast. This building has been there since the 1920s and has grown since then. It is not at all fancy but serves its purpose. Has rooms upstairs and a dining area downstairs. The resort also has cabins and motel units. The dining room has a nice view of the marina area and pictures from the past on one wall. We had a table by the window and could look at the marina and the lake. We saw a number of gray Jays going from tree to tree. It was nice to be waited on and not going in and out of the trailer to get water for coffee and cereal. We talked to a man outside who was working on the road construction at Crater Lake and he said it was snowing up there. I’d noticed snow stuck to the running board of the truck that he was driving and asked where he’d been where there was snow.

When we got back I washed last night’s dinner dishes outside on the wooden table, which was now bathed by warm sunlight. I took a shower and washed my hair when it was overcast. I’d forgotten to bring a blow dryer and stuck my head under the hand dryer for a while, which worked pretty well! Just as I came out the door to walk to our trailer the hail began. Then we had hail and rain showers for a couple of hours.

Tom decided to do the laundry. I gave him a magazine to read but he came back between the washing and the drying. He had soap in the trailer from our Idaho trip so just needed quarters, which we also had on hand. 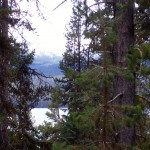 bout wanting to bike again tomorrow but I wasn’t sure I wanted to.
Thursday we were ready to go for a short bike ride but it started raining again. Rained all last night and it’s cold. We went to the lodge gain for breakfast. We waited another 15 minutes after getting ready and to see whether it would clear off. It didn’t. Not good for us to be cooped up together in small space! When the clouds lifted a little we could see snow on Mt. Bailey across the lake.

After dinner Tom suggested we go for a short hike so we bundled up and walked down the trail from near our site. It comes out on the road just across from a rather ramshackle looking pizza place. We crossed the highway onto the bike path. It was dusk but we could still see the lake and Tom spotted ducks cruising around. They had a lot of white on them and were diving ducks but we weren’t sure what kind. I took a couple of pictures. It was cloudy but the setting sun brought a metallic sheen to the lake’s surface as it reflected from behind t 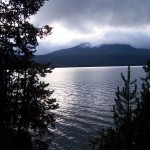 We took a short loop from the main trail past a restroom that had lights on and right nearby was a small tent. It must have been freezing in the tent. I told Tom if it were me I’d put my sleeping bag in the restroom where it was warmer although I guess the lights might be a problem.

We walked a little further and then cut back to the highway and walked back until we came to the pizza place. I’d thought to slip my small LED flashlight into my pocket before we left the traile 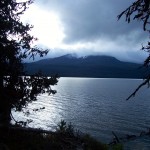 r although it had been quite light at the time. It came in handy when traffic approached. We went into the pizza parlor and were pleasantly surprised by how nice it was inside—appeared to be newly remodeled with rustic boards and beams. They also had ice cream and beer. We didn’t order anything but looked at a menu to get an idea of prices for future reference and stayed long enough to warm up, then crossed the highway and made our way up the trail, with the aid of the flashlight, to our camp.

Friday we’d be returning to Crater Lake and wondered whether the Ride the Rim would be cancelled due to snow.