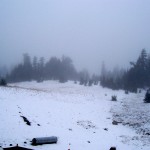 View from the car as we got close to the Rim.

Friday, we checked out of Diamond Lake RV and headed for Crater Lake with the goal of reaching Mazama Village Campground on the south side of the park (214 tent and RV sites, no hookups for RVs). When I worked at the park in the early 1960s this was just a campground. Now there is a lodge and a restaurant.

It was raining and chilly. Just past the check-in station at the north entrance the windshield wiper on my side broke and it flopped around like an injured bird. Uh-oh… There was no immediate place to turn off so Tom shut the wipers down. After a mile or so we came to a turnout and pulled off the road. He got out, removed the wiper blade and pulled the support out so that it wouldn’t scratch the windshield. For the rest of our trip I rode with what appeared to be a giant insect antenna in front of me. We were really glad it wasn’t snowing.

When we got to the Rim we could see snow, some still on the trees. We slowed down and, putting our window down, talked to a young man who had a bicycle on top of his car. He didn’t know about the Rim closure for the next day but said he’d planned to ride his bike so thought he’d probably join the riders and seemed pleased to know there would be water and things to eat. He was traveling around the U.S. and Crater Lake was a place he wanted to visit. We inched into a line of cars waiting for a pilot car at the construction site. I had my trac-phone out, just watching the No Service at the top when suddenly it said Home so quickly texted a brief message to my youngest son so that someone in the family would know we were still alive. We’d had no contact since leaving Eugene. There was no time to wait for a response as the traffic began moving again. The fog was dense everywhere. Anyone driving up for a view of the lake would have been really disappointed.

At Mazama we found a pull-through site that was nice and within reasonable walking distance of a restroom—no showers although apparently there are showers to be had someplace in the campground. Everything was dripping wet though and the table had puddles on it. We were so glad we weren’t in a tent! Fir needles stuck to the bottoms of our shoes and tracked inside but there wasn’t anything to be done about it.

I fixed instant mac & cheese for dinner, draining the pasta by resting the colander on top of the bear-proof container outside. Tom cut up some of the canned ham to add to it. Not bad! I also used the last of the lettuce, some tomato and some avocado for a salad. After dinner I washed the dishes in one of our big, red, plastic containers on the very wet table. We shared a faucet across the road with numerous tent campers. The propane worked for the heater, much to my relief. And the lights worked from the trailer battery.

I made lunches for both of us before fixing dinner so we’d be ready to go early in the morning. Saturday I’d be helping staff an aid booth and Tom would be doing some riding.