“I’m sitting on the couch, watching TV—nearly 10 p.m. Bob has been in Victorville since last Sunday. He’ll be back late tomorrow night. Drove to Sacramento and flew from there. “

Last Friday we camped overnight with all three children on Boulder Creek at Jones’s place. Horace’s nephew and wife were in the upper camp. Friday morning I had gone out to Warm Mt. School with Rebecca and Jeffrey. In the afternoon I had a doctor’s appointment that took longer than expected so didn’t get things packed and out to Boulder Creek until 7 p.m. While I was loading the car Rebecca and Jeffrey were fighting and crying. I put water in the ducks’ cages and one escaped so I had to chase it down, with Rebecca’s tearful help.

“After we got out there I put Clarke in the pack and made three or four trips down and up the hill. I’d left the sleeping bags and crib for Bob to bring. Got a fire started and Rebecca and Jeff eating in the dark. Was beginning to think Bob had forgotten when he finally arrived about 8:30, cussing and stumbling down the trail—the cart load dumping over once or twice. Fortunately, I’d brought marshmallows and Rebecca and Jeffrey roasted marshmallows while Bob and I ate. Bob blew up air mattresses while I washed dishes. We got the kids to bed around 9:30. Of course they woke up about 6:30 with pleased smiles on their faces that they were sleeping outdoors. We ate bacon and eggs and I toasted bread on the iron slab of the stove. Bob slept in and had breakfast in bed. The children roasted marshmallows again right after breakfast. Later they played in the creek and admired Bob’s ability to leap from rock to rock. We had to leave about 2:00 so Bob could get some work done at the office. “ 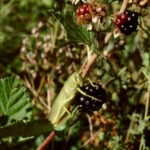 I substituted at Lewiston Tuesday and Wednesday last week and all this week too. Don Giovannetti had an appendectomy and I substituted with his 5th graders. “ I’m really exhausted. Rebecca catches the bus at 8:00. We get up at 6:30. I leave around 8:20, drop Jeff and Clarke at Linda Lindsey’s, and get to Lewiston about 9:00 when school starts. Get back to Weaverville around 4:00. The school kids really push me because they’re used to a very strict teacher and I’m not strict. So we argue and fight and sometimes have a good time in spite of it all. And then come home and fight with Rebecca and Jeffrey who are really beginning to fall apart after all this rushing. “

Leonard brought the jeep up from where Bob had parked it downtown.

“Jeff had a temperature of 103 degrees yesterday when I got home but was cooler tonight.”

Rebecca went to an auction in Redding with Janet and Mike but I kept Jeffrey home because he would get too tired and not get much out of it. I was concerned about the lack of seatbelts in their van.

We were having a heat wave. It was terribly hot out on the paved playground at Lewiston during the lunch hour and P.E.

Bob had gotten home around 10 p.m. Friday night. Saturday we drove to Garberville. Clarke stayed with Linda Lindsey. (Linda, if you read this, thank you so much for taking such good care of the children!) We ate dinner at a Chinese restaurant in Eureka. After breakfast the next day we drove to Richardson Grove State Park and took a short walk through the redwoods. Ate some huckleberries, picked up tanoak acorn cups, etc. Lots of moss on the trees and along the trail but it was very dry. We ended up at a kind of outdoor museum—a nature trail with many plaques and live or cut tree-demonstrations. Rebecca read many of them to us. Jeffrey was getting pretty tired and sleepy so we bought a burl and then walked back to the car. We drove down to Piercy expecting to eat there but nothing was open so we went back to Richardson Grove and ate at the Coffee Shop, then drove to Leggett so I could see what that looked like and Jeffrey could nap in the car on the way. Then back to Garberville and got to the picnic site at 1:30. There was a good turnout and lots of children. Many games including a board with darts and prizes for youngsters who popped a balloon. Jeff won a football and Rebecca a jump rope. Dinner was roasted whole pig and we watched them dig it up, unwrap layers of burlap, then aluminum foil before reaching the pig. 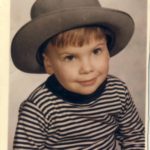 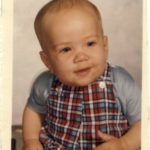 All the children’s pictures were from springtime.
Bob and I played horseshoes and volleyball and a little before 6:30 we drove to the airport. All of us and Teresa Blair flew home. At the last minute Sandy volunteered to stay so Bob could ride home with us. This was Jeffrey’s first plane ride and Rebecca’s second. My first trip in a small plane. “It was very exciting for me—there were small bumps, similar to being in an elevator—only sideways sliding at the same time. I got to see many of the places where Bob worked—Hoagen-Zinnia, Ruth Lake, etc. Lots of clear-cutting too. Mrs. Patton flew us—she just got married the day before—on a raft out in the lake. She flew over our house, banking so we could see it. A half-hour trip versus a 4.5 hour drive. We took Teresa home, then got Clarke and paid Linda.

September 22nd was a warm , sunny day after a cool morning. Mary Ann took Rebecca and Jeffrey out to Warm Mt. School. After Clarke’s morning nap he and I went down to Varney’s for a cup of coffee and to share a doughnut. We went out to get his siblings around noon and got back to town in time to take Rebecca to piano lessons with Mrs. Gott. Candy Fields came by just as I put the boys down for naps and stayed with them while I went to pick up Rebecca. 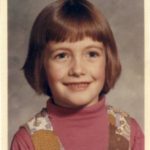 I rented a flute and Monday night went to my first music class. Later decided to drop it. Hard to play and didn’t want to keep paying rent for something I probably wouldn’t continue. Asked Dick DeRosear whether he would help me learn to play my accordion better on music nights.

The following Thursday I finished cleaning up the wood scraps left from the siding work and stacked them in the woodshed along with some of the firewood that Terry Rhinehart had brought (2 cords for $75). Took the children with me down to the pump house and cut the weeds that surrounded it so Rebecca could stand under the eaves in bad weather when she was waiting for the bus.

Friday I took Jeffrey and Susy Field out to Warm Mt. School. Rebecca wanted to go to public school. Florence called about noon and wanted me to eat lunch with her so we went to the A & W and Clarke played on the seat between us.

Doris reported to Dave that it had snowed on Weaver Bally on the 25th. She called it “fur-lined biffy seat weather”. My dad called to say he was coming down to look at places they might want to move to. My mother was still in rehab after her stroke. Bob would be gone all that week but I’d manage. We spent that weekend out at the ranch. Sunlight through fog and rain. Pretty. I picked squash, a few green beans and peas, many tomatoes. Also apples, which entailed getting much water down my sleeves from the wet leaves. Picked as many pears as I could reach. The refrigerator had defrosted because the gas had run out so I had to clean that up, which I hadn’t planned on–a sloppy, wet mess, moldy food, etc. Fortunately Clarke took a long nap and Rebecca and Jeff cooperated fairly well.

Bob cleaned up the pool and put the liner and frame upstairs—quite a job in itself. He put the tractor in the barn and some shakes he’d taken out there. We ate at Big Bar and after we got home he went down to the office and was still there when I was writing at 9 p.m. 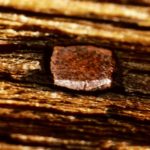 I wrote again on October 2nd. Bob worked late Monday night and I couldn’t get a sitter so didn’t go to my music class. Tuesday he left to drive with some PUC people through most of his area. My dad arrived around 1:00. We had a jigger of brandy, some coffee, and I finally got a sandwich into him around 2:30. We grew up calling our parents by their first names, Mary and Ben.

On Wednesday Ben and I went in his pickup over to Junction City to look at land, taking Clarke with us. Then we went out to Warm Mt. School to pick up the children. It was pouring rain most of the morning. The children had made popcorn that morning and had gone down to the Lewiston Fish Hatchery to observe the salmon. That night I picked up Teresa Blair at her house and she babysat while my dad and I went to a Sierra Club meeting in Redding with Florence, Leonard and Horace. Randy Witters, U.S.F.S., talked about points mentioned in the last brochure on the Wilderness Area and showed some slides of man’s influences in the proposed area. We ate dinner at Candy’s Pancake House before the meeting and had coffee and ice cream afterwards. We got home around 11:30.

Thursday afternoon Ben and I drove out to look at Wilkins’, East Weaver, the area around Millers and Gott’s, etc. When we were nearly to the airport we saw a plane coming in–a turbo-jet. I wondered whether it might be Bob so we pulled up at the airport. It was him and we talked a few minutes and watched the plane take off before Bob went back to the office and we went on driving.

Friday my dad went over to see Horace Jones while Doris Ohde and I drove out to Warm Mt. School in her car to get the children. We picked up Jeanne Meyer and her 4-year-old daughter, Anne Marie. Jeanne was thinking about sending her older daughter, Robin, to the school. Jeanne’s husband, Fred, was a ranger at the Joss House.

Went with Ben out past the airport to look at a place owned by a Charles Bailey—two acres and a little house with a marvelous view of Weaver Bally—but they were asking $22,000 for it. They’d paid $12,500 for their place in Nehalem on 3 lots) Bob had to go to a potluck in Hayfork with his supervisory employees to discuss the rate case. He got back a little after 11 p.m.

My dad left the next morning. He was so thin and haggard looking, weeping often and easily and I felt so sorry for him and my mother. He talked almost constantly while he was there and seemed to need to do so disparately so I did very little housework. He also needed physical contact and fortunately the children helped provide that. Staying with my brother and family in Seattle wasn’t working well for him either. I was really depressed by the time he left. But he did say the trip had given him a whole new lease on life and I hoped it had—I really felt inadequate so far as being able to help him was concerned.

We ate venison one night. Leonard and friends had gotten a buck the last weekend.

Spent a beautiful day at the ranch. We dug up the potato plants and each of the children’s plants had a tiny potato on it. They were delighted although Rebecca voiced some concern about Jeffrey’s being a bit larger.

Conversation between children—I have no idea how this began: