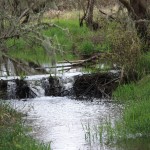 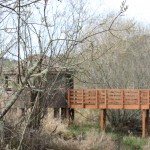 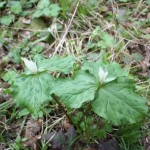 This last Monday my eldest grandson and I visited Finley Wildlife Refuge, 10 miles south of Corvallis. Several years ago he and I had gone there with no idea what to expect and had a wonderful time exploring the trails, watching birds and even getting a distant glimpse of the elk herd that wanders the area. He is almost 14 now and I was grateful that he wanted to go there with me once again.

Finley, which lies in the foothills of the coast range, was established in 1964 primarily as resting habitat for dusky Canada Geese. These geese “nest on Alaska’s Copper River Delta and winter almost exclusively in the Willamette Valley.” The 5,325 acre area was named for William L. Finley, “an early conservationist who persuaded President Theodore Roosevelt to set aside the first national wildlife refuge west of the Mississippi River.”

Where Finley Road enters the main part of the refuge there’s a restroom and a short path with explanatory markers next to a small pond. We found that the woodrat nest beside the restroom, toward the back, is still there and has gotten a little larger as the woodrats have added sticks over the years.

Our first walking spot was the boardwalk, a wheelchair accessible trail extending out over a wetland area through an ash forest. The Homer Campbell Memorial Boardwalk is about a half-mile in length and ends at a blind overlooking the Cabell Marsh, a shallow reservoir. Right after a rain the ash trees are dense with lichens as if the trees were in bloom. This year there are a number of trees recently gnawed upon by beavers. One large tree looks as if the beaver decided it was simply too large to continue with but others were gnawed almost all the way through. In fact, one tree appeared to have fallen only a short distance before becoming entangled with another and thus prevented from falling. We could also see a beaver dam with a sizeable pond behind it. We hadn’t seen this in previous visits but perhaps we were a little later in the year then and leaves may have blocked the view.

We were there during the middle of the day so there were not many birds on the water but we did see cormorants and some ducks and later a great blue heron flying low over the lake. Nick spotted a swallow nest above our heads in the middle of the sloped ceiling of the blind, obviously built this year. When my husband and I were here about a month ago the willows were alive with yellow-rumped warblers. Nick and I saw a pair of bushtits.

From the boardwalk we drove to the refuge office where there is a nature store but it’s open only Friday through Sunday. It was worth the stop though because a helpful employee showed us some photographs on display in the office area and told us they’d recently seen a golden eagle dive-bombing geese on the nearby pond trying to separate one out from the flock. The geese wedged tightly together apparently to try to thwart the eagle. We also saw a hummingbird there (they have a feeder) and Nick spotted an acorn woodpecker in one of the oak trees.

After some informative conversation at the office we drove back to the Woodpecker Trail parking lot where we ate our lunch and then started up the trail. Again, this was familiar territory for both of us and I’ve gone with Nick and his younger brother on this 1.2- mile loop before. In fact the first time the brothers and I did this we saw a bobcat just as we were getting out of the car. No such excitement this time though and others were also out enjoying the trail so we were content with just taking the hike. We circled to the right and, at the top of the rise, were soon looking out from a wooden platform that encircles a large Oregon white oak and provides a view across the meadows toward the coast range. From there the trail winds down to a small pond—a good spot to eat lunch if you haven’t eaten yet—and there is a memorial bench to sit on and view the reflections of trees bending over the water.

The trail then goes through a small forest of ash trees and then a blending of oak, big leaf maple and Douglas fir. Another trail branches off that we took a previous year that takes you to the Mill Hill Loop of 2.6 miles. We’ve done only a portion of that trail in the past.

From Woodpecker Hill we headed for home, stopping , while still in the refuge, to walk up to a blind on the edge of a large meadow with a view across a pond toward a historic red barn. It was in this meadow that we’d seen elk on our first visit. It would be fun to be here, looking out one of the small viewing windows when there were birds on the pond or elk grazing nearby. Our only wildlife siting for this spot was a rough-skinned newt that Nick saw in the murky pond water. I did find several sessile trilliums in bloom along the muddy path through the woods though and false hellebore about two-feet high. I hadn’t known that hellebore grew in the valley, having always associated it with the mountains. Reservations are required for use of this blind. Then it was time to head for home with a refreshing stop for ice cream in the town of Junction City along the way.