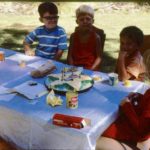 On August 12th there were two fires burning in our general area, one on the ridge behind the USFS and one near Del Loma. Smoke filled the whole river valley and some around our house. Both were still out of control the previous night. The one near the ranger station, Denny Creek, was about 20 acres and the Del Loma one about 200 acres. Dave Ohde stopped me downtown yesterday to tell me about them. We gulped our dinners and then Bob had to see about getting phone service into the Hayden Flat area and I did dishes and packed the car in preparation for going out to the ranch. Florence offered to take the children and I took her up on that. I stopped at the ranger station at Big Bar to inquire about things. Irene Nunn told me it had nearly gotten their house. I went on up to the ranch, unpacked the car and got sprinklers going. I fixed a pot of coffee, had a piece of cake and took trips upstairs to look at the smoke. Bob arrived around 10:00 pm with a phone company installer who then went on to Weaverville in our VW. Bob had left his company car at Hayden Flat so the USFS could use the phone. We kept the phone company repair vehicle so we could have some way of communicating. We planned to look at the fire, then exchange cars in Weaverville and bring the children out.

The next day we went down in the phone company rig to the fire camp. While still on our road the fellow who brought Bob out Friday night called on the radio and wanted us to meet him near Del Loma so he could get his gear. There must have been 40-50 Forest Service vehicles parked at the fire camp on the flat this side of Del Loma Lodge. We talked to Russ Engle and Bob Spivey who said they’d made good use of Bob’s phone, placing about 50 calls that night. They had a kitchen area set up and a tent for women who were timekeepers. We stopped at Big Bar to call Florence from the pay phone; the others were out…they lost 12 or 13 telephone poles. Talked to a man who was camped at Hayden Flat when the fire came over the hill there. He said “you never saw a camp empty so fast!” 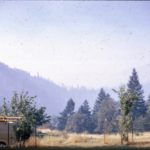 We went into Weaverville, got the children from Florence’s and went up to the house to eat lunch. Then Bob took Rebecca and Jeffrey out to the ranch with him so he could go on to Del Loma first and show them the fire camp. They got to watch a helicopter scooping water up from the mouth of Big French Creek. Clarke and I went on up to the ranch. I cleared out the settling tank and scooped some stuff out of the dam then brought Clarke down to the house to put him down for a nap. Bombers (4 engines) started going over around 4 pm, about the time that Bob and the older two showed up. They continued in a steady stream until sunset. Florence called to find out what was happening because they were going over Weaverville too. 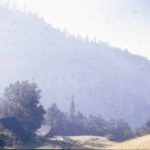 Rebecca and Jeffrey wanted to use the pool but there was a dead bat in it so I scooped it out with a plastic container. Since bats can carry rabies in their saliva we decided to drain the pool and clean it.

The generator wouldn’t start that night and Bob was down looking at the fire so I read to the children at bedtime by candlelight. I left a candle burning on the table for Bob and went to bed as I wasn’t feeling well (had stomach problems off and on for the next few days). Bob said the fire was burning on the west side of Big French Creek but pretty well under control—they’d lost it to the east of Petreau Creek though.

The canyon was so full of smoke the next day that we couldn’t see Eagle Rock lookout. By noon it had pretty well cleared out though. We kept in touch with Doris on Eagle Rock. Bombers were going over again. There was a very bad fire at Old Shasta too. With three fires along one highway on the same day there is speculation that they may have been set.Now it was Monday, the fire started Friday, and Bob went to get his car Sunday night but they needed it for another day so he left it there. The fire was pretty well stopped, at least on this side.

Bob was planning to join our two springs together so we’d have more water at the house.

I still wasn’t feeling well but managed to get Jeffrey’s party invitations cut out. Had a terrible headache.

Candy called and after we’d talked for a little while a man’s voice cut in on our party line and told us he’d been listening to us gossip for half an hour. If he’d just said, “excuse me ladies but I’m at the fire camp and I need the phone,” we’d have hung up but he was really rude. The only good comeback I had for him was to say that he had another phone, a mobile unit, available and why didn’t he use it? I was pretty sure he wondered how I knew that.

I’d just finished reading a book called “John Gaff’s Mill” about a couple who renovated an old sawmill in New Hampshire. Made me think a little of us except they were doing it for a living and year ‘round. “There’s an air of the fall to come today–just since this weekend. The last two nights the children have worn pajamas and we’ve had just the one window upstairs open.”

The deer got into the garden again.
Clarke now calls Rebecca “Ruh-begea” and Jeffrey “Deffwey”.

Candy, Jim and Carin came out on the 20th, a Sunday. Jim helped Bob with the septic tank. Florence and Leonard packed Nancy and David Adrian in to Bear Basin that Saturday.
One weekend we had a really good rain.

One morning I went out on the porch to check on Clarke and found him playing with a bucket of pipe fittings. Unfortunately mice had stored mouse poison down the bottom of the bucket. I didn’t see any evidence of it around his mouth or on his hands but called Dr. Breeden to see what he suggested. I didn’t have anything on hand to make him vomit so he suggested a finger down his throat. I tried about 15 times but all I got was bitten so I decided to wait it out and watch for any blood in urine.
He had said it would take quite a bit to affect him.

Steller’s Jays were hopping around in the field catching grasshoppers. The doe with the single fawn kept trying to drive away the little spike buck, last year’s fawn I think, striking at him with her hooves. The doe with the twins didn’t mind him hanging out with them. Maybe he babysat. 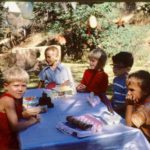 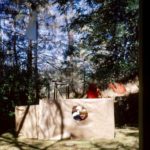 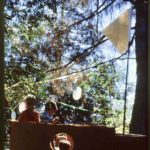 At some point Jeffrey had his 5th birthday party. Guests included Josh White, Ronald Lindsey, Anne Marie Meyer , John Van Duyn. Not sure what the theme was but the props included a boat and a starfish cake. Jeff, maybe you remember.