One morning I peeled and cut up apples for applesauce, then took the children down to the creek for an hour. They made boats and rafts out of driftwood and really had a good time. After lunch, after Clarke went down for his nap, I canned four quarts of applesauce. Mowed the lawn and used the pool. Clarke didn’t sleep so Rebecca got him up when I was on the last 1/3 of the lawn and fed everyone popsicles on the fenced-in porch. Then I made more applesauce, which we had with dinner and finished with breakfast the next day.

August 28th was the first day of school for Rebecca and Jeffrey. Rebecca could hardly eat breakfast. I drove her to school where Mrs. Crane would be her second-grade teacher. Jeffrey wanted to ride the bus so Clarke and I watched with him until the bus came. I followed the bus over to school where Mary Jo took them under her wing.

Took Clarke to Linda Lindsey’s. Ran an errand or two and went over to the pool for half an hour—with no children! We had spent the weekend out at the ranch. Bob worked on the septic tank both days and Saturday I chopped the wood he had brought out in the truck. Sunday I hauled rocks up from the creek from the rockslide. The heat really made me feel sick. I sat in the creek before going back to the house. Saturday I saw a pileated woodpecker. It flew in and landed in an apple tree then flew from there to a large ponderosa pine at the lower end of the meadow where it called.

I got the nursery school job. Had a meeting Friday with their board. I would be teaching two mornings a week and having one night class a month for parents. This is a parent-cooperative so
parents would participate in working with the children. Those who were working outside the home and not able to participate paid extra.

The first day of elementary school was on a Monday. “Tuesday I picked up Jeffrey and Rebecca at the school, dropped off Clarke at Linda Lindsey’s, picked up packs from the house, got a fire permit from the USFS and gas for the car. Then we drove up Weaver Bally. We left the road around 4:30 and were at East Weaver Lake by about six. Rebecca and Jeffrey complained for the first 100 yards and then seemed to get in gear and we did well up to the top of the ridge. (reading this now I still can’t believe I took these two out of school and then plunged over a cliff with them. I’d forgotten where the trail went from the ridge top and took them straight down. Bob and I did that once but we weren’t little kids. Now I think things like what if I’d broken a leg or hit my head or…… I do remember that all summer we’d been going to go on a backpack trip and hadn’t. Bob was out of town again so off we went. ) 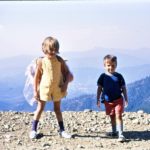 We found wild mint along the trail even though it was very dry and saw two giant ant nests made from twigs and fir needles.

“Fortunately we had consumed a small bag of peanuts and water at the spring by the road before we started. Rebecca was using my old Himalayan pack, carrying her sleeping bag and the tent. Jeffrey carried his sleeping bag in a little nylon bag. Going down the other side of the ridge was rather traumatic. I think we got on someone’s shortcut because the trail went straight down the hill with very minor zig-zags and lots of loose rock. The kids had to slide on their bottoms a good part of the way. Jeffrey dropped my hat and it rolled down the hill. The camera strap broke and the camera went bouncing down the hill.”

“After we got to camp I gathered wood and got a fire started and water heating. We had a bean and ham dinner with marshmallows later. Rebecca was upset because she wanted to help and was busily stirring a no-bake brownie mix. It dumped out and I was upset but then told her the animals would like it. I hope I made her feel OK. I told her this morning that I thought the recipe called for too little water, which made it hard to stir (which I think was the case) and that I probably would have dumped it too.”

“I put up the tent and Rebecca blew up her own air mattress. The a little later I lost the cap off mine so she gave me hers (all the air leaked out of hers during the night). They slept in the tent”.

“We were invaded by deer as soon as it got dusk. I spent most of the night shooing them out of camp. Would hear teeth chewing, turn on the flashlight and find a deer five feet away. Sometimes they would spook and run and I was concerned about one running into the tent or stepping on me—I could feel vibrations from their feet on the ground when they were close. After the moon came up they finally left. I looked at my watch at 2:15 and next at 5:30 so I guess I slept during that time at least.”

“Rebecca woke around 7:00 and Jeffrey about half an hour later. Gave the children warm iced tea and then applesauce, warm, and hot cereal. After dishes were cleaned up I went for a swim –cold but stimulating. Rebecca and Jeffrey played they were fishing. Had sticks with fishing line, left in the camp, and tied rocks to them for fish.”

“East Weaver Lake is quite small, maybe 200 feet by 75 feet. There was no water running in but probably underground seepage. Lots of waterdogs, and small fish. The fish weren’t visible from shore last night but this morning were jumping for insects (and even a dragonfly that was laying eggs) in the shallows. They did some exploring too while I broke camp. We left about quarter to 12 after eating a chocolate bar and drinking some water. “

“I took them out the same way we came in since I didn’t know where the trail was. I went up the hill with Rebecca first. We had quite a struggle at the steep place. I left them perched along the “trail” and tried another route but it was bad too. I had a struggle myself with it. Left my pack up on a flat and went back down to help them up. Once we reached the top of the ridge and headed down they realized how tired they were. Rebecca’s toes were sore from her new tennis shoes. (I’d had to buy them yesterday, just before we left because her oxfords were too tight). Jeffrey was stumbling and we were all hungry. We drove down to the spring and ate lunch there – salami sandwiches, apples and iced tea. Got back to Weaverville about 2:45.”

“I called Linda and Clarke was still napping so I cleaned up, Rebecca cleaned up and Linda called when I was about to get Jeffrey tubbed so I went ahead and did that. Also had time to get most of the cleanup done.”

“Bob called that evening and I gave him a brief rundown of the trip. It was really a good trip but we’re all tired. I weighed my pack when we got home. It was 35 pounds. My thighs are quite sore. “